What is the typical temperature of an airliner's hull during flight?

Some high-speed military aircraft like the SR-71 had real heating problems, but airliners also travel almost at the speed of sound, use most of their fuel to make up for frictional losses, so I would presume that their hulls heat up. They are also cooled by the airflow, but at what temperature does equilibrium set in during cruise? I remember that airliners don't seem to be very hot when you touch them after landing, but they have had time to cool down in the slow winds during descent.

There are two primary factors that affect the skin temperature of an aircraft in flight: the air temperature, and the speed of the aircraft.

The air temperature where airliners cruise is relatively cold, around -54 °C at 35,000 feet.

Using a simple formula to find the ram rise:

Using a typical airliner cruising speed of 500 knots gives a temperature of 33 degrees. This brings the total air temperature to -22 °C, which is still quite cold. At places other than the leading edge, the temperature rise will be less. This is why cargo holds will need heaters to be safe for live animals, even being insulated and pressurized. Airliners just don't fly fast enough to produce a significant amount of heating.

On the other hand, the SR-71 could fly at over 1,910 kts, which gives a ram rise of 482 °C. The air doesn't get much colder as you climb to the altitudes where the SR-71 flew, so this gives a total air temperature of over 400 °C. Speed makes a huge difference.

In fast aircraft, the maximum heating is at the stagnation point. Here the kinetic energy of the flow is completely converted into pressure, which heats the air and, consequently, the structure. Due to the low local speed and the high pressure at and near the stagnation point, the rate of heat transfer is high, too, adding to the heat load.

But past the stagnation point the air will accelerate and become faster than flight speed. Now pressure and, consequently, temperature need to drop sufficiently to encourage the flow to stay attached and follow the curvature of the forward fuselage. This acceleration will cool the air, so the flow right above the windshield will be cooler than the ambient air.

Along the cylindrical portion of the fuselage, we find roughly flight speed again, but now friction will change the temperature close to the wall. Again the kinetic energy is converted, but the heating is caused by friction. See the boundary layer plots below: 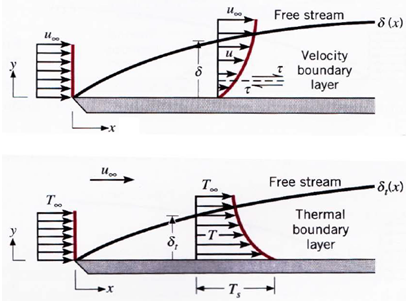 The fuselage temperature is determined by the equilibrium between thermal conductivity, radiation and convection.

Not the answer you're looking for? Browse other questions tagged aerodynamics airliner temperature or ask your own question.

1
Temperature of airplane while flying?
21
How do fast-flying aircraft avoid overheating?
11
Do aircraft use the majority of their fuel to overcome friction?
18
What is the difference between OAT, RAT, TAT, and SAT?
18
Does cargo heat failure require a diversion? What about if there are live animals in cargo?
3
Why is the temperature of the cabin so low during a flight?
6
What is the temperature of intake air at several speed of sound intervals from 1x to 10x?
3
What is the relation between airspeed and generated heat at constant drag?
3
What type of variation in temperature does the wing undergo?

6
What is the fuel temperature in the tanks during a flight?
19
What is the temperature of the brakes after a typical landing?
0
What's the formula to calculate static air temperature?
7
Why do aircraft stall warning systems use angle-of-attack vanes rather than detecting airflow separation directly?
6
Airliner speed when descending through 10,000 feet
1
What is a typical range of air temperature used for engine inlet cowl anti icing?
5
How much aerodynamic heating do jetliners endure?