I'm trying to wrap my head around what the PHAK (Pilot's Handbook of Aeronautical Knowledge from the FAA) states for constant speed propellers.

First, why is it that if airspeed increases, for a fixed RPM, your blade pitch will increase, and conversely decrease if airspeed drops? Is it because it wants to maintain that low AOA (2-4 degrees according to the PHAK) with the relative airflow? If its AOA were to increase, such as not changing blade angle as airspeed drops, would drag increase causing the RPM to fall? And if airspeed is too high and AOA is too low, there's not enough drag to slow down the blades?

On takeoff, you want max thrust/power. By setting the blades to low pitch, you get max RPM because the blades take less of a bite out of the air. This also keeps blade AOA low which in turn reduces drag and allows RPM to build? Also, is max thrust in this case the result of the blades generating a lot of lift because of their high velocities from the higher RPM (versus thrust from moving larger chunks of air)?

Why is low RPM preferred in climbs/cruise? If you increase the blade pitch in these flight regimes, you get a smaller AOA with respect to wind which from my understanding so far reduces drag? But then doesn't the blade taking larger bites of air require more power anyways to maintain that RPM? Is it more efficient to give power to blades to move larger loads of air than it is to run at lower blade angles and higher RPM?

And lastly, with regards to blade AOA and relative wind, would a blade generate more lift if it had a higher AOA, but at the expense of additional drag on the blade which in turn requires more engine power? Is this drag induced drag because it's an airfoil?

A propeller has an optimum AoA, where the thrust/drag ratio is highest. A variable prop can maintain this optimum AoA at a wide range of speeds, thereby reducing fuel consumption. That's all it does.

Fixed wing propellers have a dilemma that at take-off they require maximum thrust, and in high-speed flight the engine will need to be throttled back to prevent overspeeding. Maximum engine power cannot be utilised at every airspeed.

why is it that if airspeed increases, for a fixed rpm, your blade pitch will increase?

On takeoff, you want max thrust/power.

You want maximum thrust. This is generated by making the propeller spin as fast as possible (not exceeding tip Mach), with a maximum blade pitch where the blade does not stall. Reducing blade pitch to increase RPM results in no increase in thrust: Power = Thrust * RPM.

If you increase the blade pitch in these flight regimes, you get a smaller AOA with respect to wind

No a larger AoA. More thrust and more torque on the propeller axis.

The engine runs most economically at the RPW where maximum torque is generated, the constant speed propeller speed control wants to maintain that RPM.

would a blade generate more lift if it had a higher AOA, but at the expense of additional drag on the blade which in turn requires more engine power? Is this drag induced drag because it's an airfoil?

An important thing to keep in mind is that the propeller control system has no idea what the blade angle is (except in BETA mode systems which is another topic completely). It's a flyweight governor that just moves the blades coarser, finer, or holds them static based purely on engine speed, and the speed setting from the prop lever is just increasing or decreasing pre-load on a spring that tends to hold the flyweights in.

A specific blade angle and AOA is a function of the torque the engine is producing and the speed setting. There will be some optimum AOA at any one time, but since we can't control that specifically, we are only concerned with RPM and let the blade angle take care of itself.

Since total HP is a function of manifold pressure and RPM, I can use a range of different engine speeds and throttle openings to make the same HP. There will be a speed/MP setting that roughly results in blade angles that are optimal when making say 85% power and this would be the recommended power setting for 85% power climb (typically something along the lines of 25" and 2500 RPM say). But I can use a lower RPM and higher MP to make the same horsepower if I wanted, such as 2400 RPM and 26", still making 85% power (I'm just pulling numbers out of my head for illustrative purposes here).

There is an old saw that says "oversquare" settings (low RPM/high MP) like that are bad, but it's not really true unless it's taken to the extreme. There is a benefit to using lower RPM, such as 2100 RPM and 25" MP vs 2300 and 23" to make the same HP, because the engine most benefits from slowing down all the reciprocating parts. Less friction and therefore less heat, and very importantly, piston ring speed, and distance traveled, is less for a given power setting (piston rings wear out based on distance traveled; slow them down and they don't go as far per unit of time). Cylinder internal pressures are higher running oversquare, but unless temperatures are high or there is detonation (a potential only at the extremes, like WOT at min RPM) it's not important (supercharged engines spend their entire lives crazy oversquared).

Operationally, it's the power and RPM that's the main concern, not optimizing blade angle.

Take a look at page 148 from Aerodynamics for Naval Aviators, a great book freely available. https://www.faa.gov/regulations_policies/handbooks_manuals/aviation/media/00-80T-80.pdf

This picture from the book shows how prop efficiency is related to blade pitch and advance ratio (which is proportional to speed). The top shows how it varies for a series of fixed pitches.

The bottom part shows how prop efficiency varies for a constant speed prop, which shifts $\beta$ to absorb the power coming out of the prop, resulting in a blade position that is ideal for that particular speed. 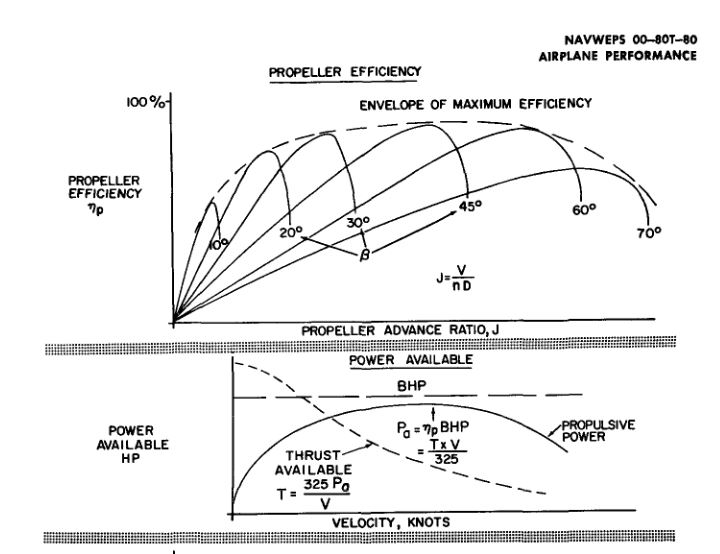 The ideal efficiency curve for the constant speed prop can be shifted through the prop design, with the peak efficiency in the plot potentially designed for a takeoff condition, cruise, etc.

Also note in the bottom plot how thrust varies with advance ratio (it shows speed on the horizontal axis, but it is really advance ratio). For takeoff or landing, where you want maximum thrust available and are willing to sacrifice efficiency for a period of time, you'd like to run the prop at a low advance ratio. It naturally happens that as you slow down the advance ratio lowers, but you can further decrease it by increasing the RPM if you have an engine where the engine and prop RPM are not directly coupled (e.g., turboprop with an N1 and N2 turbine). If you've flown on a Dash-8, you'll note how they use a higher RPM for takeoff and landing, and a lower RPM once up and away. More thrust available in the landing pattern, more efficiency in cruise.

Another good reference is this McCauley booklet in which

Reading it, one can see the method of spring/flyweights/oil pressure controls the piston that determines the amount of blade twist.

Sorry, I don't see a way to attach it, you'll have to deal with the link. Page 6 on the left and 7 on the right let you see the whole diagram presented.

Not the answer you're looking for? Browse other questions tagged aerodynamics propeller constant-speed-propeller or ask your own question.