What is a normal EGT range of a jet engine?

Out of curiosity at what temperatures are the exhaust gasses are expelled from jet engines? A normal reciprocating engine from what I recall should be in the 700 - 1100 degrees Celsius range. Does this apply to turbofans/turboprops/turbojet engines also since the fuel properties should be similar? Or are the temperatures much lower as the engine is being used mostly at high altitudes?

In non-afterburning engines the exit temperature inside the nozzle is around 600°C at full continuous thrust. If the ambient temperature is low, less heating is needed for the same thrust, and exit temperatures are lower. The maximum temperature for a given engine is, however, independent of altitude and given by the materials inside the engine. In flight the continuous maximum can be higher than on the ground, when the cooling by the external flow is less effective.

Temperature profile at a distance

This report gives results of ground measurements on the Pratt & Whitney JT8D of the Douglas DC-9 and shows how quickly the temperature drops behind the aircraft due to mixing and radiation.

Jet temperature behind a DC-9 at take-off power. Picture source.

Jet temperature behind a DC-9 at idle power. Picture source.

With full afterburner the engine uses approximately five times as much fuel as when running dry, and it shows in the exhaust gas temperature. This report details measurements of nozzle pressures and temperatures on one of the General Electric F-404 engines used in the X-29 program. The plot below is taken from the report and shows exhaust-jet temperature summaries in the horizontal centerline for various power settings (PLA = power level angle; 120° is full afterburner and 87° is military thrust).

The test conditions were 30.000 ft altitude and Mach 0.3, simulated in an altitude chamber. The temperatures were measured with a rake just a few inches aft of the engine nozzle. Note that the temperatures are given in Rankine; the maximum of 3800°R is 1838°C. The wake of the engine's center body causes lower temperatures in the center of the jet at XSRL = 0. The nozzle edge is at 12.7 inches from the center; due to symmetry only one half of the jet temperature profile is shown.

The exhaust gas temperature of a jet engine depends on a number of parameters like,

Without after burner, the exhaust gas temperature is around 600-650 $^{\circ}$ C, which goes upto 1500 $^{\circ}$C with after burner. The figure below shows the data for General Electric J79 low bypass turbofan engine. 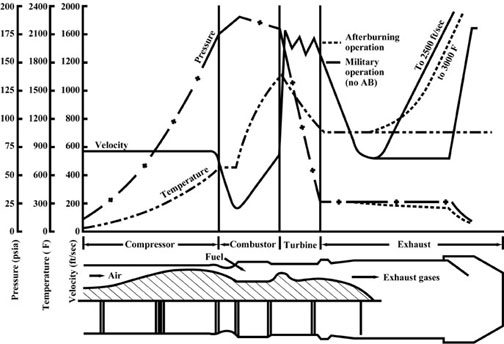 In case of high bypass turbofan engines, the exhaust gas temperature is slightly lower, usually around 500-600 $^{\circ}$ C. For example, the figure shows the temperature variation in PW 4000 engine. 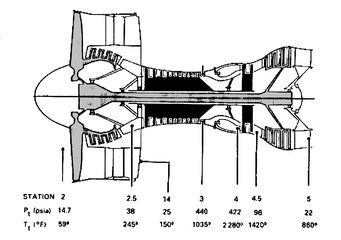 The Exhaust gas temperature is a parameter to measure engine health. A high EGT for a given thrust (by a engine) is a sign that the engine required more fuel for the same thrust, due to wear out of rotating components, etc, and the engine may require inspection.

Not the answer you're looking for? Browse other questions tagged jet-engine egt or ask your own question.

37
Why do gases in the combustion chamber only flow one direction to the gas turbine in a jet engine?
10
Why can't we extract more from exhaust gases in gas turbines?

6
How does turbofan engine performance depend on speed and density altutude?
31
What material is used to make the hot sections of jet engines?
24
Could most commercial jet engines today run on ethanol without any problems?
6
How does compression ratio change, if at all, from sea level to higher altitudes?
41
What is some of this extra "stuff" on jet engines?
7
Is it practical to integrate turbofan or ramjet engines into an airliner wing?
33
Why don't modern jet engines use forced exhaust mixing?
4
How would exhaust heat recovery into the combustion chamber affect the efficiency of a jet engine?