Jet engines are noisy[citation needed] - even a modern high-bypass turbofan is still deafeningly loud compared to pretty much anything except the even-louder low-bypass turbofans or a turbojet (much louder still than even a low-bypass turbofan). Unsurprisingly, making jets quieter has been a major concern for the entire jet age; as the majority of a jet engine's noise comes from turbulence at the boundary between the hot core exhaust, on the one hand, and the ambient air (turbojets) / bypass airflow (turbofans), on the other (along with, for turbofans, a small contribution from turbulence at the boundary between the bypass airflow and the ambient air), the primary means of doing this without needing a turbine-incineratingly-high bypass ratio1 is by making it so that the two or three exhaust streams mix smoothly, and preferably do so before going out the tailpipe (so that any noise that is generated during the mixing process can be trapped within the nacelle).

To this end, early jetliners used intricate forced-mixer tailpipes, which were extremely effective at mixing the exhaust and the ambient air, and, thereby, reducing noise; they could either be built into the engine at manufacture time, or retrofitted later on as a "hushkit". These could be seen both on turbojets...2 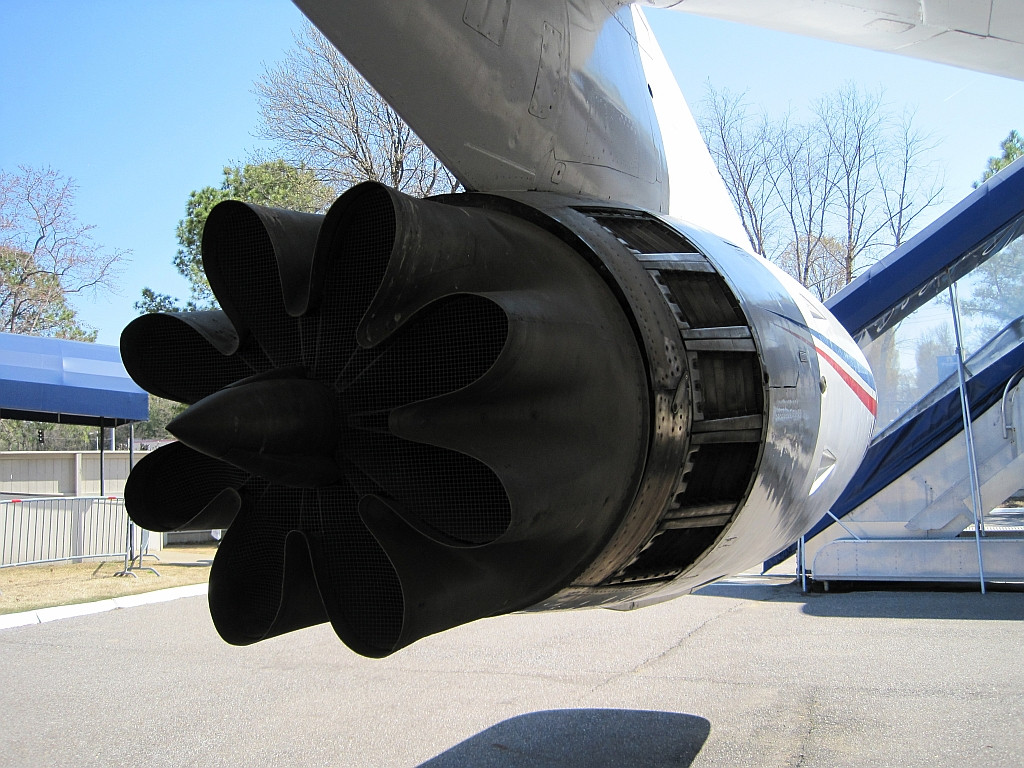 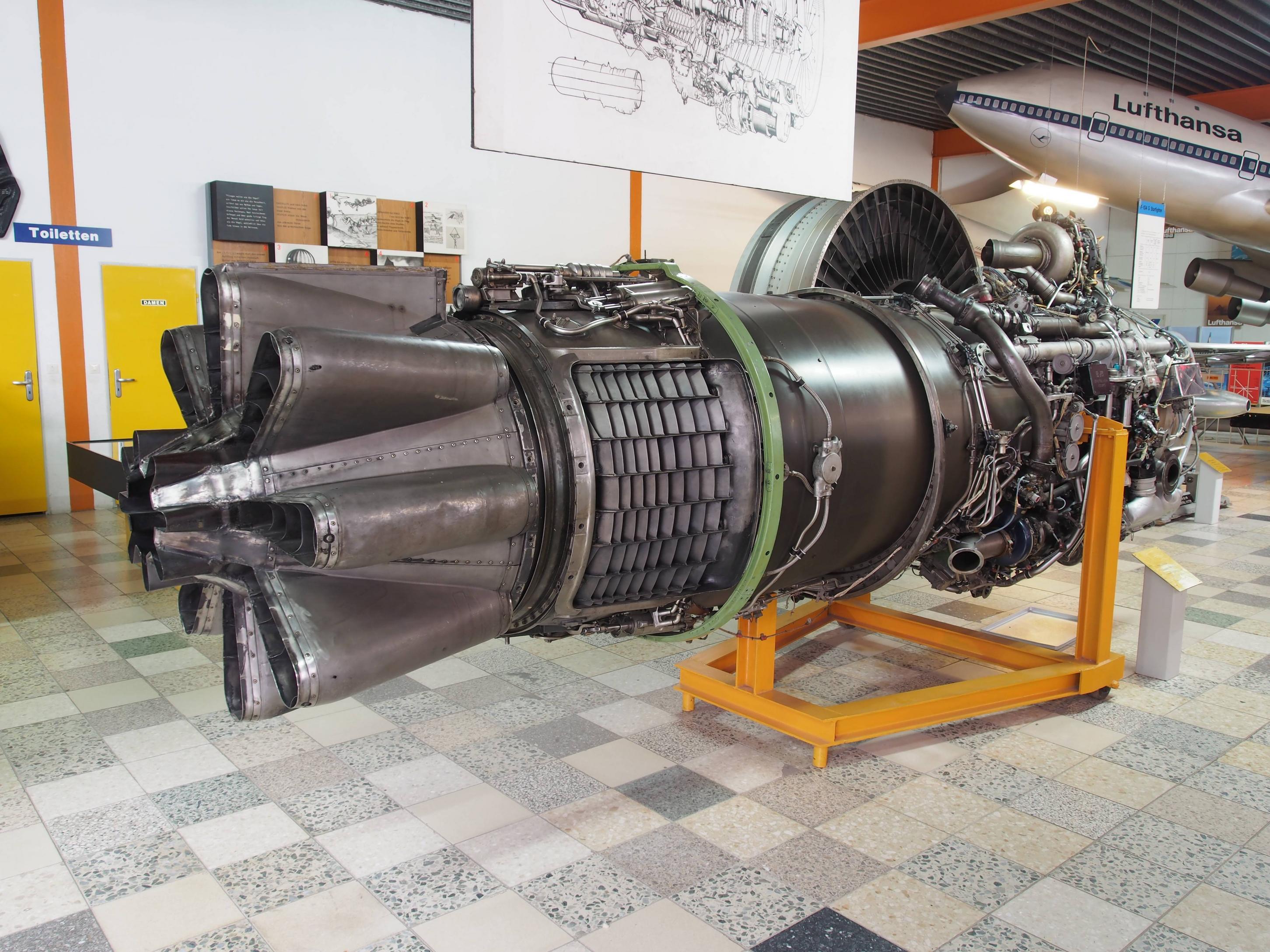 With the switch to high-bypass turbofans in the 1970s and 1980s, the dramatically-increased bypass ratio of the new engines was enough all by itself to produce a large drop in noisiness, such that even a plain, unmixed tailpipe was acceptable, and the forced-mixer tailpipes of the earlier engines slowly disappeared from view as the numbers of aircraft using the older engines dwindled.

However, since then, the NIMBYs have gotten more exacting and noise standards have continued to grow stricter and stricter, forcing jets to again use exhaust mixing to make them quieter. Two methods for doing this are in common use:

These sawtoothed tailpipe rims enhance the mixing of the core, bypass, and ambient air, reducing noise:4 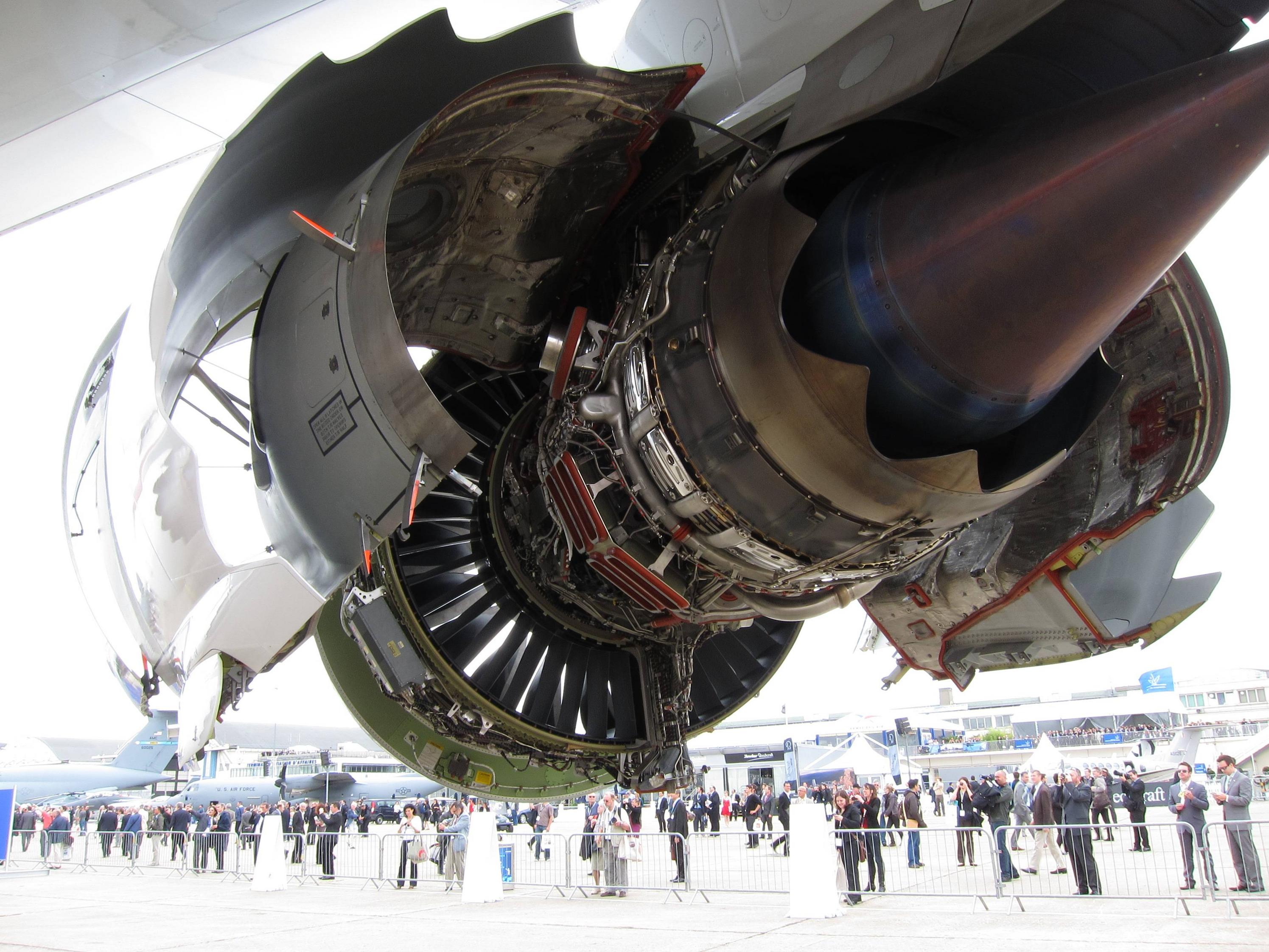 These engines simply send both the core and bypass airflow through a single, long tailpipe, where shearing forces at the boundary between the two airstreams create turbulence that causes them to mix to some extent before exiting the engine:5 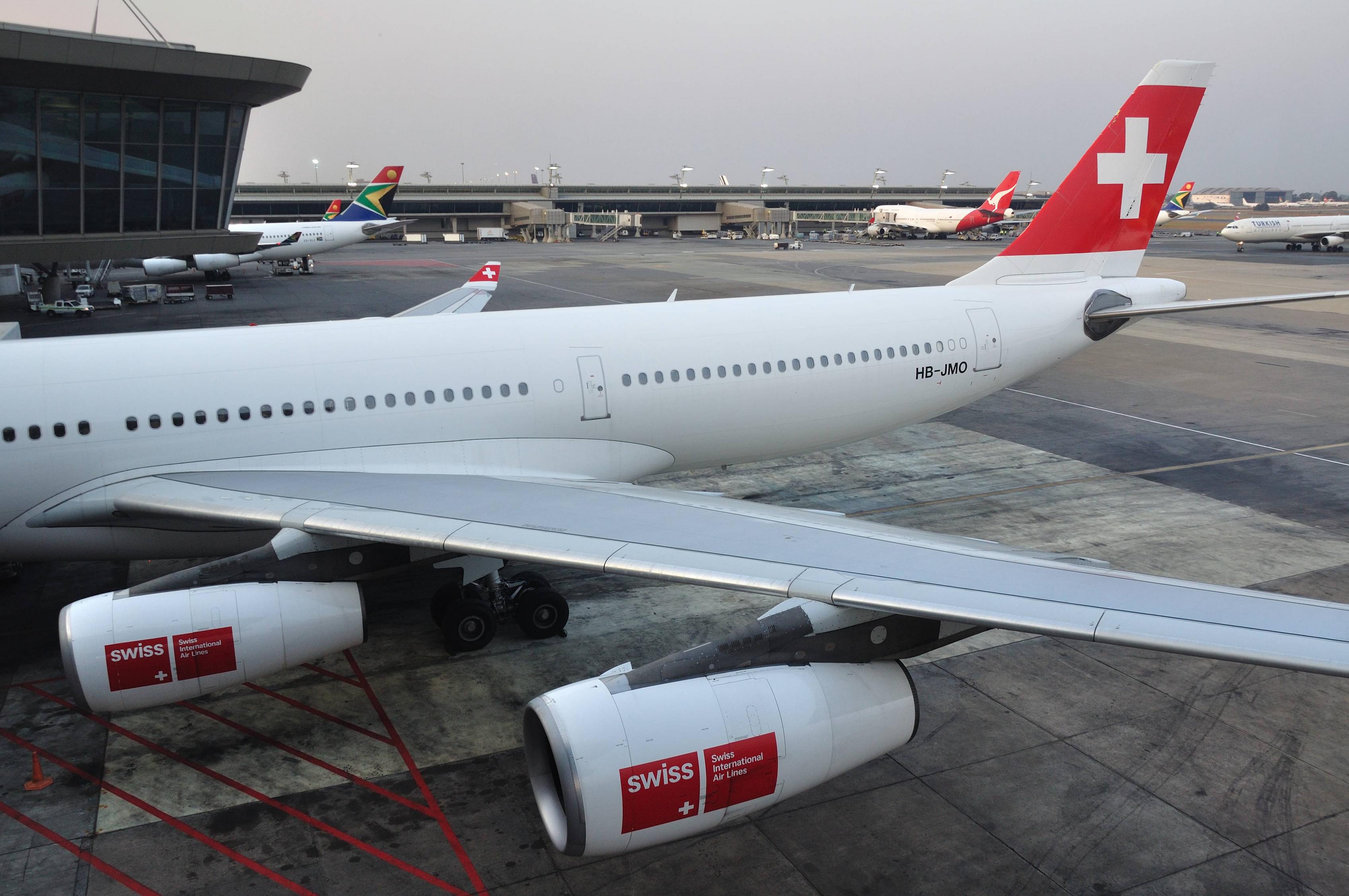 Both of these methods, however, are fairly inefficient at mixing the different airstreams; a scaled-up forced mixer would be far more mixy (and, therefore, more noise-reducingy). So why do modern high-bypass turbofans still use inefficient methods of exhaust mixing, instead of the more effective forced mixing?

1: A higher bypass ratio requires (for a given thrust rating) more power per unit turbine, which requires the turbine to run hotter.

2: Exhaust mixer of a General Electric CJ805-3 turbojet from a Convair 880 (image by Thomas R. Machnitzki, via DoxTxob at Wikimedia Commons).

3: Exhaust mixer of a Rolls-Royce Conway RCo.12 low-bypass turbofan from a Boeing 707-420 (image by Alf van Beem at Wikimedia Commons).

5: Exhaust mixers of two General Electric/SNECMA CFM56-5C high-bypass turbofans from an Airbus A340-300 (image by Hansueli Krapf at Wikimedia Commons); two more A340s, along with their engines and said engines' exhaust mixers, are also visible in the background (one each at upper left and upper far right; please ignore the 747 at upper mid right). 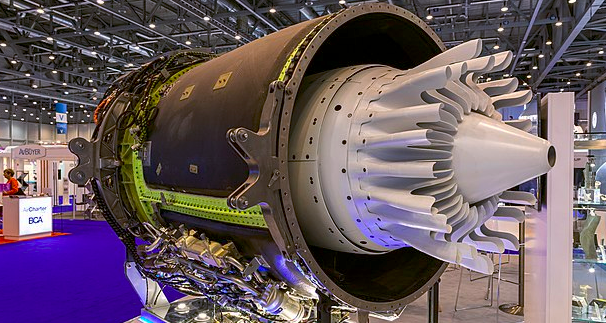 They're back. Above is the General Electric Passport. Entry into service was 2018.

Its core cowling, exhaust cone and mixer are made in ox-ox composites, with inorganic high-temperature-tolerant resins and oxide ceramics CMCs to withstand 1,000°C without deformation, saving weight and allowing complex molding.

The above hints at the hotter exhausts of the newer (since the mixers disappeared) engines, and that CMCs were the solution.

For the turbine inlet temperature, below is the trend: 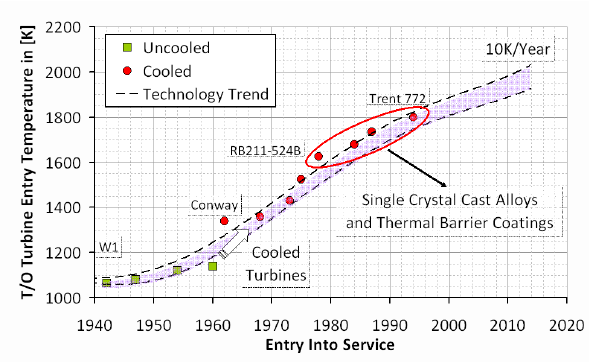 From the respective flight manuals, an A380's max continuous EGT (Exhaust Gas Temperature) is 970°C, while it's 580°C for the older MD-80 (both don't have mixers, but it shows the trend). While you can bleed-cool turbine blades, there must have been no gain in cooling a mixer with bleed or they would have done it (bleed takes away from a combustor's efficiency, and at some point overall gains turn into losses).

Related: Why did Boeing remove the engine chevrons on the 777-X?

Because there isn't as much gain to be achieved from the jet exhaust any more, and because forced mixing impacts performance.

Not the answer you're looking for? Browse other questions tagged jet-engine airliner noise noise-reduction or ask your own question.

20
Why did Boeing remove the engine chevrons on the 777-X?
3
When is jet engine thrust maximum?

18
How does contrail formation differ from turbofan to turbojet?
14
How much thrust is lost due to the bleed air system?
4
How do aircraft engine manufacturers achieve a higher bypass ratio while still meeting the thrust requirements for a given aircraft?
2
At what Mach Number do variable cycle engines (VCEs) start showing benefits over turbofans?
1
What prevents DC-9 series aircraft from being reengined with more-efficient engines?
4
Why are most turbofans tractors, but most propfans pushers?
17
Why do the 737-100's JT8Ds, and no others, have suck-in doors?
3
Why does turbofan exhaust appear to reverse direction?
5
What were/are the military designations of the JT8D and PW4000?