There are no major differences between a turboprop used on an airplane and a turboshaft used on an helicopter. All power is collected by the turbine shaft which rotates the blades through a gearbox.

An example of a gas turbine used in helicopter, airplane, train, and even snowplow is the well-known Pratt & Whitney PT6. It has different versions. The two versions shown below are the PT6A for a propeller (top), and the PT6B for an helicopter (bottom, with a large gearbox). Each sub-family has variant for different powers. 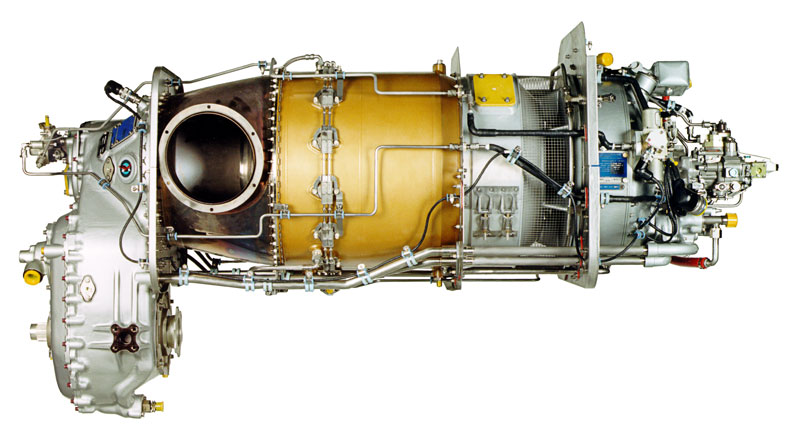 On the two images, from right to left: The accessory box powered by the compressor section, the air intake recognizable by its filter, the compressor (not visible), the combustion chamber (yellow color on the bottom image) with its circle of igniters, the turbine (not visible), the exhaust (the big hole, best visible on the bottom image), the power gearbox with different output shafts.

There are different types for aero-engines, including turbojet, turbofan, turboprop and turboshaft (I exclude the ramjet which is not used in civilian aviation).

All types are based on a gas turbine, but the way the turbine participates to the motion is different. 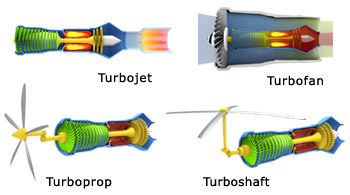 While airplanes use all types, helicopters cannot use the jet action/reaction principle (tip jet excluded for simplification).

The gas turbine can be the same for turboshaft and turboprop engines, but will be fitted with appropriate elements:

Gas turbines used in both cases are frequently free turbines, where the compressor section and the turbine (power) section rotate independently of each other. This allows to produce electricity or hydraulic power on the ground without turning the blades.

26
Are there helicopters with vertically mounted turbines?
2
What is lifting force of V-22 Osprey? Is any other than the two rotors?

28
Why are propeller engines uncommon on airliners?
55
What is the difference between a turbofan and a turboprop engine?
12
Is the Progress D-27 really a propfan?
6
Do some helicopters require classes, type ratings, or special endorsements, the way some airplanes do?
5
How are multi vs single engine helicopters categorized?
10
Why were turbojets the first kind of turbo-engines, instead of turboprops?
8
Is it incorrect to refer to a C-130 as a jet?
25
Why are turboprop intakes placed below the propeller?
36
Do the Mt. Everest rescue helicopters have modified engines to operate at high altitudes?