Do redundant angle of attack and sideslip sensors use a voting mechanism, or do they display data directly?

In civil transport aircrafts (featured with dual/triple redundancy), how does airplane's Airflow angle (AoA/AoSS) sensor measurements read by the pilot? By using voter mechanism as used for airspeeds or individual sensor measurements to pilot and co-pilot?

The A320 is fitted with an air data inertial reference system (ADIRS) made of 3 ADIRUs. ADIRU 1 data (altitude, speed, etc) are shown on Capt side, ADIRU 2 on F/O side. ADIRU 3 can be selected manually.

Each ADIRU contains an air data reference (ADR) and an inertial reference (IR). Each ADR receives the AoA value from a separate AoA probe. 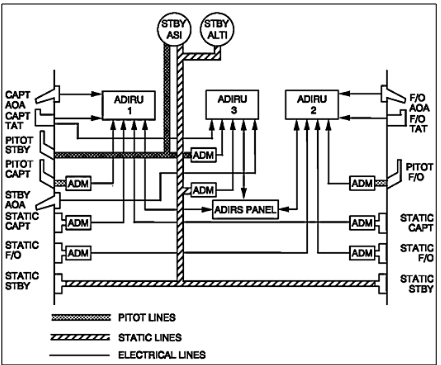 The AoA value is not displayed by default, but it is accessible on the MCDU after selecting the related page. The values are always monitored for validity by FAC/ELAC before being used.

The final value is the mean of valid inputs. If one ADR disagree it is silently discarded. If all ADR disagree, a message is displayed. Any ADR can be shut down using the overhead panel. From this report:

If one ADR has been detected as being faulty, or has been rejected by the flight control computers, and there is an airspeed or angle of attack disagreement between the remaining two ADRs, then a level 2 alert is raised. This activates the master caution and presents an amber NAV ADR DISAGREE message on the ECAM.

The way the discrepancies are managed can lead to rejecting a valid value because the two other ADR are wrong, but agree.

All pictures are from the report.

Not the answer you're looking for? Browse other questions tagged airliner angle-of-attack sideslip or ask your own question.

7
What is this in the primary flight Display?
1
How is the voting mechanism and FDI algorithm applied in transport aircraft?

33
How does an alpha (AoA) vane work?
1
What happens to the pressure differential of airflow under and over the wing as the critical angle of attack is reached?
6
Why are the positions of an aircraft's angle-of-attack vanes dependent on airspeed?
1
What effect does the angle of attack have on lift and drag?
15
What were the advantages of the L-1011 AoA sensor design?
7
Why do aircraft stall warning systems use angle-of-attack vanes rather than detecting airflow separation directly?
3
How are airliners AoA-Sensors calibrated?
13
Why are the angle-of-attack sensors on most airplanes mounted on the forward fuselage rather than at the wing roots?
8
Why aren't angle-of-attack data sanity-checked before being fed to other aircraft systems?
4
Finding Angle of Attack/Angle of Sideslip using East/North/Up Coordinates