Why do aircraft stall warning systems use angle-of-attack vanes rather than detecting airflow separation directly?

These systems, although mechanically simple, have the major disadvantage that they do not actually detect an impending or actual stall itself; instead, they detect when the aircraft is approaching its usual stall angle, and assume that the usual stall angle also happens to be the current stall angle. Which is all well and good, if your aircraft has invulnerable wings devoid of high-lift devices which are magically immune to things like ice and insect accretion, but most aircraft have wings that

Stall-warning systems on newer aircraft try to take this into account, such that an aircraft’s stall warning threshold might be set to (say) 25º when clean, 45º with slats extended, and 5º if icing is detected. However, although the aircraft’s clean stall angle is easily measured during flight testing, as is the stall angle with various high-lift-device configurations, the stall angle of an iced, insected, or damaged wing cannot meaningfully be determined in this manner, as it depends on the precise amount, shape, texture, etc., of the ice/insects/damage, which have a near-infinite number of possible configurations; as such, the threshold in icing conditions is mostly a guess, and could easily be far lower, or far higher, than the actual stall angle of a particular icy wing, and most stall-warning systems don’t even try to account for insect smears or wing damage. To make matters worse, icing, insects, and damage are seldom symmetrical between the two wings, such that one wing could easily end up with a considerably higher stall angle than the other; an angle-based stall-warning system will provide no indication of this.

It is, however, possible to detect an impending or actual stall directly. As an aircraft’s attack angle approaches whatever its stall angle happens to be at that particular moment, the airflow over the upper surface of the wing starts to separate from the wing; this flow separation begins at the trailing edge, and the region of separated flow extends forwards as the aircraft comes closer and closer to stalling, until, when the aircraft finally stalls, the flow separation covers nearly the entire upper surface of the wing. This flow separation, and the associated powerful turbulence, can easily be detected by a pressure and/or sound sensor on top of the wing, and this technology was first available over a quarter-century ago; to quote the NTSB:

There is new technology available that can detect airflow separation on aerodynamic surfaces. One new system measures the pressure in the airflow above the upper wing surface with a probe located at about 70 percent chord (varies by airplane), inboard of the ailerons. The system has been shown to effectively detect upper wing surface turbulence associated with airflow separation, both in flight and during the takeoff roll, once the airplane has accelerated to at least 50 knots. According to a Society of Automotive Engineers (SAE) technical paper,77 developmental testing found that:

Conventional stall warning systems, which use a fuselage mounted AOA sensor, do not measure the actual stalling condition at the wing. The key to determining an early stall due to the presence of contamination is to measure the flow directly at the lifting surface. Local velocity changes in a region above the upper surface of the wing provide a consistent indication of an approaching aerodynamic stall even when contamination is present. This method of stall warning also offers new levels of safety during low level windshear recovery and takeoff performance monitoring.

ATR had established a test program that evaluated the effectiveness of this device before this accident. The system was tested on an ATR 72 in January 1994; and it was tested on ATR-42-500 in December 1994. In addition to ATR airplanes, tests have been conducted with the detection device mounted on a Cessna 421 (cabin-class piston twin), a NASA Sabreliner (business jet), and a Fokker 100 (passenger jet). Additionally, wind tunnel tests were conducted with various amounts of surface roughness and ice shapes on various airfoil designs.

A second new type of airflow separation detection system measures the change in sound (amplitude and frequency) of the airflow over the surface of an airfoil. This system had not been flight tested before this accident, but subsequent wind tunnel tests at the NASA Lewis Research Center showed consistent reliability in the detection of airflow separation.

Yet, even though systems that detect a stall or impending stall directly have been available for decades, and such systems are able to reliably detect a stall no matter what the aircraft’s stall angle is2 (which a vane-based system could never even come close to doing), the overwhelming majority of aircraft (even the large airliners where a stall would be the most-potentially-catastrophic) still use attack-angle vanes as the basis of their stall-detection and -warning systems, instead of using systems based on airflow-separation detectors.

1: T-tailed aircraft have a stickpusher as well as a stickshaker, due to the risk of the aircraft entering a difficult-to-recover-from deep stall if the stall warning is ignored; the stickpusher activates at a somewhat higher attack angle than the aural warning and the stickshaker.

2: Or, for that matter, if the aircraft doesn’t know what angle of attack it’s flying at (and, thus, can’t even begin to determine where it lies relative to the threshold) - for instance, because it doesn’t know how fast it’s going.

The short answer is that we want to warn the pilots about an impending stall well prior to an actual stall condition. From a safety perspective, waiting until the airflow starts to separate, or at the onset of buffeting, it's already too late.

By using AOA we can set a very conservative threshold. This AOA threshold can be adjusted by taking into account many factors such as the flaps/slats configuration, airspeed (mach number), etc.

By nature, sensors which work by detecting airflow separation cannot be used to provide this early warning.

To expand on peekay's point, the bottom line is that waiting for actual flow separation to occur is waiting way too late for a stall warning system, except on aircraft with extremely mild and benign stall behaviour. For aircraft that do have very benign stall behaviour, you already have a flow separation detection system, known as pre-stall buffet (You can take this to an extreme in a 1-26 glider, which has a nicely progressive stall with a powerful shuddering buffet at its onset, just below minimum sink speed. You thermal a 1-26 just on the edge of the buffet, shuddering and rumbling your way around).

But for lots of aircraft you just don't want to get to or close to stalling AOA in the first place (aircraft with stick pushers have them because the stall itself is potentially fatal, and the pusher is a last chance at avoiding it) and relying on detection of flow separation is of no use. You have to have margin, and that means you have to have AOA.

And not just AOA on complex aircraft. Stall protection computers use the AOA as one of several data inputs. Aircraft deceleration rates and other factors are all included in computing a solution that sets the top of the barber pole, and sets shaker and pusher (if installed) firing points with adequate margin for a particular flight condition.

There are really good reasons to have AOA gauges other than for stall warning, so they are already there. Probably an element of wanting to keep the systems simple?

For the majority of operations the AOA indicators are great. For cases like icing, hopefully you know there is icing, and you are flying with margin. With an iced wing, stall warning can be too late. Still, I’d not complain if I had a true stall sensor.

If the FAA required them, then we’d see them. So probably a big policy element in all of this as much as engineering element.

Very good question - although the last paragraph suggests that AoA sensors should be replaced by separation sensors.

...still use attack-angle vanes as the basis of their stall-detection and -warning systems, instead of using systems based on airflow-separation detectors.

AoA is of course a vital parameter of flight state, also providing knowledge on how far away the aircraft is from stall in a normal situation.

The flow separation sensors should be in addition to the AoA vanes. Like your question poses, to determine of the normal state has been abandoned, for instance due to icing - supercooled water icing can cause change in the shape of the airfoil, which then causes airflow to separate at a different angle of attack than would normally be the case. The AoA sensor knows nothing of this. 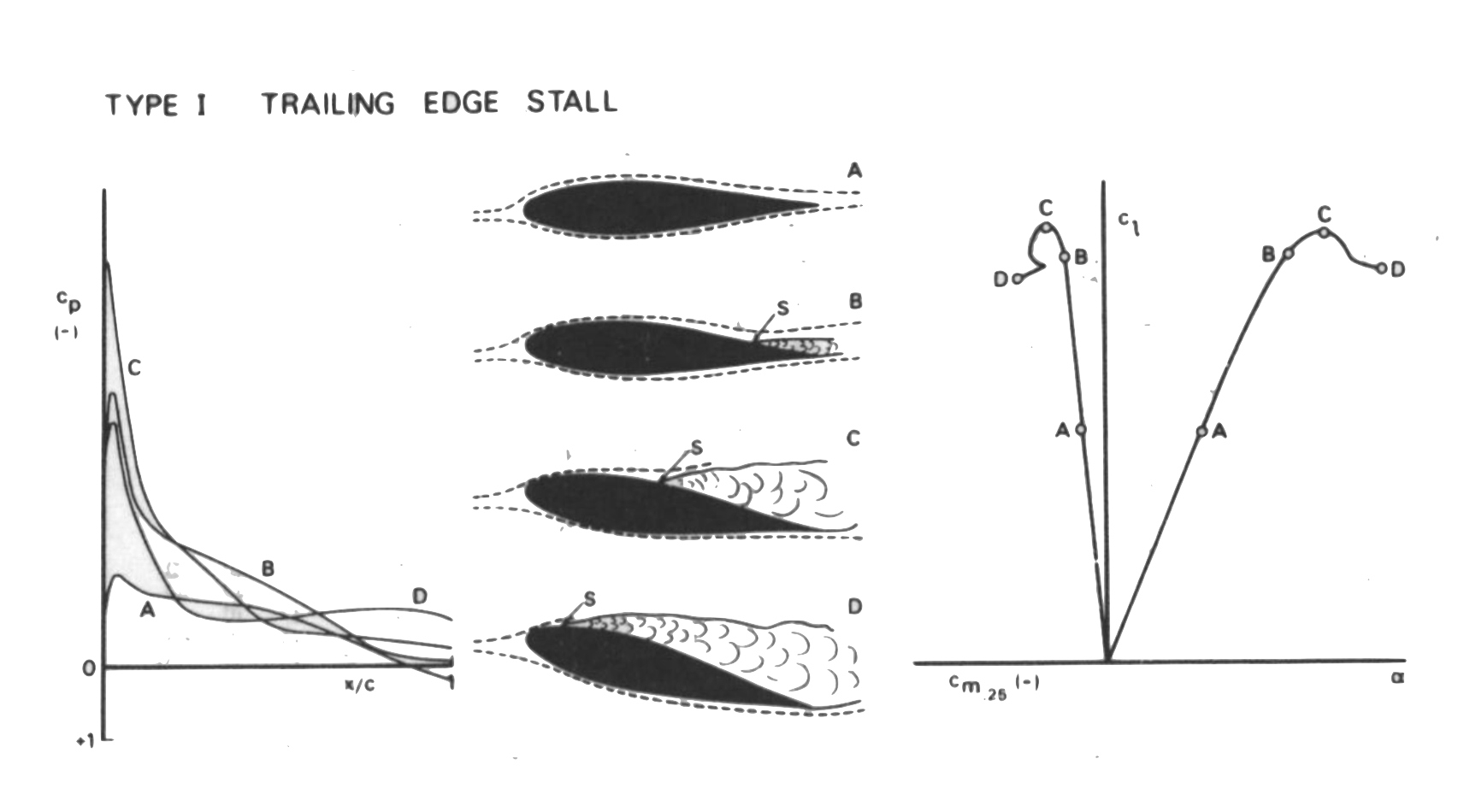 The picture above shows thick airfoil stall, which is a gradual process starting at the trailing edge of the airfoil. Clever positioning of the separation sensor will alert the pilots to take action in this situation.

Why have they not been installed? That does remain a very good question.

Not the answer you're looking for? Browse other questions tagged safety airliner flight-instruments stall sensors or ask your own question.

6
Why are the positions of an aircraft's angle-of-attack vanes dependent on airspeed?

34
How does stall depend on angle of attack but not speed?
16
Does stall angle of attack in inverted flight change due to the camber of an asymmetric airfoil?
4
When approaching stall, why does the center of pressure move back?
14
Why does a stall decrease lift, rather than increasing it?
1
Mechanical vs Pneumatic Stall Warning Systems
1
How do aircraft stall warning systems handle (or not) asymmetric-stall situations?
6
Why is the A330/A340's angle-of-attack protection disabled in alternate law, even if the AoA vanes are operating normally?
4
Why aren’t there any lifting-canard airliners?
2
Why does the effective alpha/CL increase at wingtip of swept wing?
12
Why are the angle-of-attack sensors on most airplanes mounted on the forward fuselage rather than at the wing roots?