Normally, friction between surfaces is affected by the materials. Can skin friction be reduced by a low friction material like Teflon?

Indirectly, yes. Friction goes up when dirt and smashed bugs accumulate on the wing. A low surface energy coating might well reduce their stickiness, so the wing collects less dirt and has less roughness. This is especially helpful when it helps to delay the transition from laminar to turbulent flow.

Another way to delay that transition would be a soft surface which could help to dampen the characteristic Tollmien-Schlichting oscillations from which the transition of boundary layer flow from laminar to turbulent springs. Accelerated flow is naturally damped (the amplitude decreases relatively to flow speed), so it stays laminar on a smooth wing. Once the damping turns negative (i.e. the oscillation is increasing), the turbulent transition is imminent. When the wing is not only smooth, but also soft and helps to dampen those Tollmien–Schlichting oscillations, even unaccelerated flow might stay laminar for longer, which again reduces friction drag. So far, I am unaware that this effect has been exploited successfully on an aircraft, though.

The friction between gaseous substances and solids is not affected by the surface energy of the solid, so a direct reduction in viscous drag due to a polytetrafluoroethylene coating will not happen.

I trust you know how drag depends on surface roughness. If not, please feel free to post another question.

According to this paper some kind of roughness can lower skin friction.

The idea is to create small "barrels" of gas that rolls between surface and the gas flow. The surface has ridges perpendicular to the flow direction. They guide air in small rotating air tubes.

Shark skin also has a reduced skin friction. Here is how it looks : 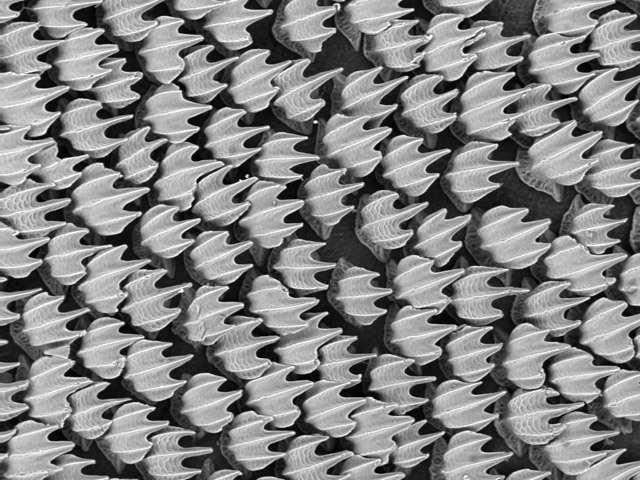 I think it provide both advantages of ridges (gap between scales) and the soft surface properties Peter is talking about.

Not the answer you're looking for? Browse other questions tagged drag or ask your own question.

2
How much might soft skin reduce aircraft skin friction?

5
Does skin friction drag decrease with velocity?
2
How can the zero-lift drag coefficient (parasitic drag) be calculated?
1
How do you calculate Profile Drag?
2
Blunt noses subsonic drag - why a complete ellipse?
2
Does increased fineness ratio decrease skin friction drag?
2
How much might soft skin reduce aircraft skin friction?
2
How to distinguish the induced drag of a lift-producing wing from its pressure drag?
1
What surface materials do airplanes use to reduce friction?