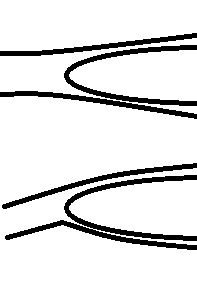 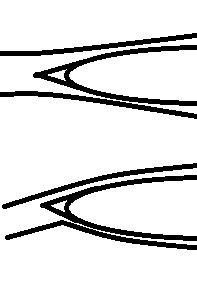 48
Why/when is the blunt nose better?
7
Can a steady flow have stagnation points?
3
How can static pressure be obtained over a range of airspeeds?
2
Why are Leading Edge Flaps (LEFs) create lift while down at slow speeds but decrease lift while down at higher speeds?
1
Why is it harder to maintain laminar flow on larger aircraft?

5
For a large commercial plane on landing, does the L/D ratio increase, decrease, or not change much?
8
Why should the leading edge be blunt on low-speed, subsonic airfoils?
2
How to calculate aileron deflection for achieving similar roll dynamics at thin and dense air?
5
How do you calculate total drag on a wing?
11
Aerodynamic advantage of blunt noses and WHY (subsonic)
4
On a constant speed propeller, how is blade pitch related to airspeed and efficiency?
3
Why did this delta wing generate a lower Cl at a higher wind tunnel velocity?
25
Why are heavy flaps better than just a bigger wing?
1
For subsonic aircraft, would adopting a higher wing loading decrease drag?