For a very basic airplane, say like Cessna 150 is built with Wing Area (S)=15 meter squared (say it 15m*1m). In another part said that the Lift (L)=0.5*rho*(V)^2*Cl*S. Mean, Lift is affected by the wing area. Yes, it is clear. My question, should I consider the wing area as fix area during the take off, cruise, and during landing? If angle of attack of the wing is 15 degree during take off, what is the wing area?

From the Lift formula above that is written here, S (wing area) is planform (projected). Where it to be projected? If like above, if during the take off the Angle Of Attack is 15 degree, what is the wing area? Very appreciate if explanation provided with reference.

Wing area does not change with angle of attack. The only way wing area can change in flight is if there are devices on the wing that can extend and retract, making the wing longer, shorter or wider.

Simple answer: the surface area is the area of the wing when you look at it straight down. The question then of course is, why?

The answer is quite trivial: because it's easier that way. In a way, your idea that the lift is dependent on the wing area projected in the direction of the incoming wind seems quite reasonable (surely, this is what the incoming air "sees"). This projected area equals $$S_p=S\sin(\alpha)$$ A good reason not to use $S_p$ is that we like the equation to contain real geometric parameters, so that we can easily scale our equation up and down. So, why not define the lift equation as $$L=\frac{1}{2}\rho c_l S\sin(\alpha) v^2$$ This looks nice right? Everything is in there, even the angle of attack!

Sadly, curve of the lift versus the angle of attack does not follow a nice $\sin(\alpha)$ curve. This equation is thus sadly not only misleading, but you would have to divide all existing lift curves by $\sin(\alpha)$, which would make them erratic (especially around $\alpha=0$) and much less insightful. So, lumping the angle of attack into the lift coefficient is in the end the best way to go.

Here is the 150M planform, you can see the flaps from the fuselage out, a foot or so wider than the elevator. 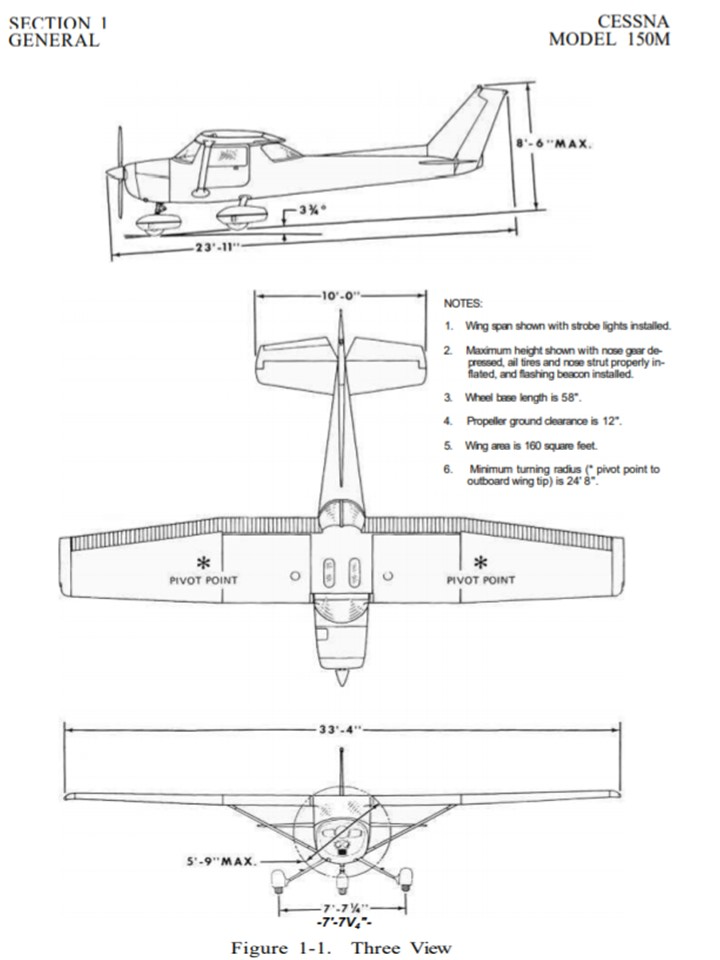 A split flap that slides backwards, before hinging downward, thereby increasing first chord, then camber.[13] The flap may form part of the upper surface of the wing, like a plain flap, or it may not, like a split flap, but it must slide rearward before lowering. As a defining feature - distinguishing it from the Gouge Flap - it always provides a slot effect. [14] Invented by Harlan D. Fowler in 1924, and tested by Fred Weick at NACA in 1932. They were first used on the Martin 146 prototype in 1935, and in production on the 1937 Lockheed Super Electra,[15] and are still in widespread use on modern aircraft, often with multiple slots.

I can't find numbers on how much the chord/camber is changed on a 150.

Here's a great discussion of the Fowler flap from 1942

An analysis of the variables shows Coefficent of Lift, CL, varies with change in angle of attack. ρ is air density. So, check your AoA/CL graph. Area should be constant.

Post Script: this equation may be of value if one wanted to swap airfoils in a design. For AOA comparison of lift, one might make a giant constant out of the entire equation (L) and the run various AOA off the AOA/Cl graph. Although laborious by hand, this would be tailor made for a spreadsheet and would make a nice presentation with graphics.

Also, if anyone knew if coefficient of lift for an airfoil was done at a specific AOA by convention, this would be extremely good information. I would imagine it may be done at AoA for best lift/drag ratio.

3
How can I calculate the moment coefficient around the center of gravity?
4
How does the aspect ratio of a wing impact its lift?
2
Is it possible to estimate airspeed on top and bottom sides of a wing at zero angle of attack?
2
How can the zero-lift drag coefficient (parasitic drag) be calculated?
10
Why do delta wings generate less lift at a particular angle of attack compared to straight wings?
3
Does a rotating control surface change the wing area?
2
How does the engine produce aerodynamic lift at high angle of attack?
2
Does using wings with different wing loadings work the same as a swing wing, without swinging the wing?
1
Does distributed propulsion create unwanted lift at cruise speeds, requiring a negative angle of attack?
3
How does downwash affect angle of attack?