How does the A350/380 operate on Variable Frequency AC generators?

To keep a constant frequency of 400 Hz, most aircraft have a CSD (Constant Speed Drive) associated to the AC generator. On most types (e.g. A320, A330, B737, B747, B777) an Integrated Drive Generator (IDG) is used. This unit is simply a CSD and an oil cooled generator inside the same case that provides this fixed frequency output.

Sometimes we even use a variable-speed constant-frequency (VSCF) generator, that provides AC power at constant frequency using a tap converter.

According to Civil Avionics Systems, such system is found on the Airbus A350, A380, Boeing 787, and new business jets. But only certain systems use the variable frequency (VF) AC. Namely motors such as in the fuel and hydraulic systems. They are designed to operate at different speeds with tolerances allowed for the slowest modes of operation.

In short, the motors, heaters, etc., are designed to operate on different loads reliably.

From the 787 manual, items such as cockpit displays and instruments use DC power instead. DC fuel pumps, brakes, and igniters, are also used on the 787.

The reason for it not being implemented decades ago is that motors weren't easily made reliable, especially DC motors. Another reason is the cooling requirements for the motor controllers, on the 787 for example, liquid cooling is used. Solid-state relays replaced most of the traditional circuit breakers, enabling automatic load shedding. One reason for that is to further limit the generated heat. 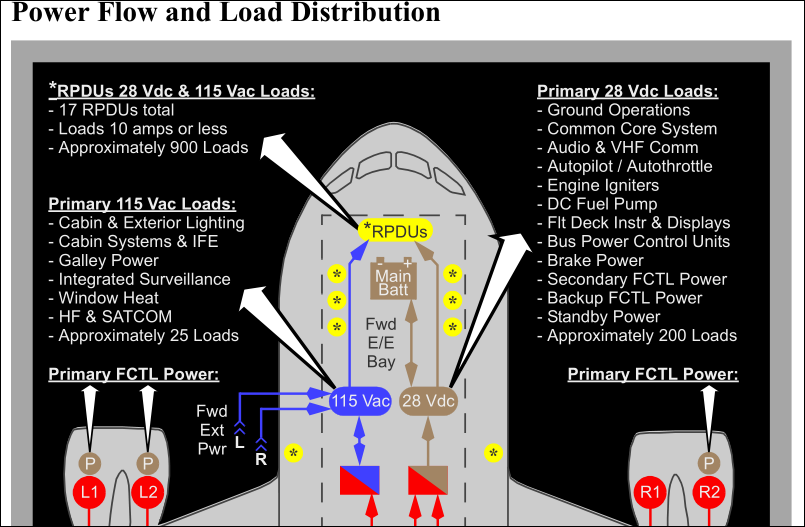 Snippet from the 787 manual.

The above VF system is by far the lightest, and is less complicated. Between it and the IDG system, there was the short-lived variable-speed constant-frequency (VSCF) used on the McDonnell Douglas MD-90. In its early days it proved troublesome to maintain but eventually it achieved high dispatch reliability. As with the VF, the engine generators outputted VF, but then tap converters (a mid-80's invention) were used to produce constant frequency. Below are the MD-90's air-scoops used for the cooling of this system which is placed in unpressurized compartments:

Sources: airliners.net and an MD-90 paper

Related: Why are the 737's variable-speed generator drives so unreliable?

Not specific to aviation but general electric equipment: AC with a consistent frequency is important whenever you transmit power through solenoids directly fed from mains voltage. Now, traditionally, this included almost everything except primitive devices based on resistive heating (including light bulbs). Motors obviously need to generate alternating electromagnetic fields to push their rotors, and most electronic devices can't just operate with the given supply but need some specific voltage levels: the simplest way to achieve that is a transformer. In either case, reliable AC frequency is needed if you want it to work efficiently.

But these electromagnetic devices have their problems – they're big/heavy (more so in 50/60 Hz than in 400 Hz) and inflexible. If you need to change the speed of an AC motor, you need to either use an asynchronous model which does not have the precision of a synchronous one, employ inefficient step-down techniques or even mechanical gearing. Similarly, changing voltage in an LF transformer (or keeping it constant when the input fluctuates) is only possible with tricky-to-operate coil taps, or with wasteful resistive power-burning.

Over the last decades we have gained powerful, efficient, compact HF switching solid-state circuitry which can largely solve all of these issues, and doesn't depend on any fixed AC input (neither frequency- nor voltage-wise). It basically uses always DC (first rectifying the AC, if necessary) and then internally generates AC of whichever frequency is optimal for the application. This allows quickly stepping motors at any speed and precision to degrees, as well as feeding sensitive electronics with just the right voltage, without significant losses or input-fluctuation sensitivity.

So when none of the consumers really cares for 400 Hz anymore, you might as well allow that frequency to change too, if it means the necessary power can then be generated more efficiently.

A VFG on a A350 (Variable Freq Generator) ranges from 360Hz to 800Hz (idle to takeoff) but it weighs less than a traditional IDG or CDS due to the fact that it has less components inside since it does not need to convert the freq to a fixed 400Hz. Most components that use AC convert the variable frequency to a fixed 400Hz anyway.

The output of the generator is actually 230VAC , so you can go with a higher gauge wiring for even more weight reduction.

At the end of the day its all about weight reduction. The A350 also has a 5000 psi Hydraulic system because by upping the pressure you can use a smaller diameter of titanium tubing.

Not the answer you're looking for? Browse other questions tagged airbus-a380 electrical-system airbus-a350 or ask your own question.

0
What is the working principle of VFG
14
Where are the circuit breakers on the 787?
9
What is the difference between frequency wild AC system and other AC systems?
6
Why are the 737's variable-speed generator drives so unreliable?

5
How do airplanes regulate the output frequency of AC generators?
10
Why are the cockpit windshields on the A350 black?
9
How is the crew rest area on the A350 accessed?
5
How many tanks does an A350 have?
7
Why does the A350-900 call out to retard at 20 feet above the runway?
11
How does the A350 variable camber system decrease drag?
2
How a customer could choose "A330-Neo" or "A350 Regional" on shorter routes?
2
What are these things on the A350's instrument panel?
6
Why are the 737's variable-speed generator drives so unreliable?