Could an airplane dock with a set of wing extensions while airborne?

I figure there are limitations to wingspan while on the ground but could we engineer wings that stay aloft or get towed to allow a plane to 'dock' with them in order to fly higher/longer/more efficiently?

Actually, a similar concept was tested by the USAF in the 50s (like most things in aviation, it seems). Under the name of Project Tom Tom, the military was looking into the possibility of coupling a parasite fighter (an F-84 in this instance) to a B-36 as a long-distance escort as it flew into the Soviet Union by joining the two aircraft together at the wingtips. Flying as such, the F-84 would actually power down its engines during coupled flight and could receive fuel from the B-36. However, the aspect with greater relevance to the question is that the B-36 would actually derive an aerodynamic benefit from this arrangment as well. In theory, the combined aircraft would also benefit from having an artificially elongated wing as well, and, while I remember reading last year that this actually did result in superior fuel efficiency for the combined aircraft during cruise, I am at a loss to find that source right now. At any rate, with respect to this question, the B-36 effectively docked with a pair of "wing extensions" (in this case, a pair of F-84s) while in flight and derived a benefit in cruise. A video of the concept can be found here:

. Also, more reading can be found in this text Flying Aircraft Carriers of the USAF: Wing Tip Coupling by Brian Lockett.

Naturally, there were significant downsides to this idea. While the F-84 actually did manage to engage the coupling mechanism on the B-36 on test flights, logging at least a couple hours of continuous, coupled flight, significant stability and safety issues were uncovered during testing that led to the scrapping of the project. As noted in a quote from the project summary report:

The wing-tip coupling mechanism as developed and flight tested in the Tom-Tom program is not considered satisfactory for tactical use and was barely acceptable for test flying. It appeared that a new difficulty and a now shortcoming were uncovered on virtually every test flight. The extent of rework necessary before the coupling mechanisms as designed were acceptable as flight test articles is covered under the DESIGN section of this report.

Similarly, issues with aeroelasticity turned out to be a much larger issue than originally expected (in part because of the change pitching/heaving forces as well as wing mass distribution and stiffness at the joint). I think that Aurora Flight Sciences ran into similar issues when they were designing an entry for DARPA's Vulture project...the idea was to join multiple vehicles (that were essentially flying wings) to create a super-efficient, high-altitude, solar-powered, surveillance aircraft. Due to conflicting requirements on wing structure and aircraft weight, I think that ultimately didn't fly...but I don't have any of the details for that. Just what I remember from a presentation I saw many years ago.

At any rate, I guess that my answer is: yes, it could. But it is VERY difficult and dangerous to do (at present).

Why dock in flight? It would be simpler to use telescopic wings, like the fs-29 did. It had a fixed center wing and moveable outer wing gloves which could slide in and out. Wingspan could be varied between 13.3 and 19m this way. The idea was to reduce wing area and drag for fast flight between thermals and extend the wing for slow flight when gaining height in thermals. 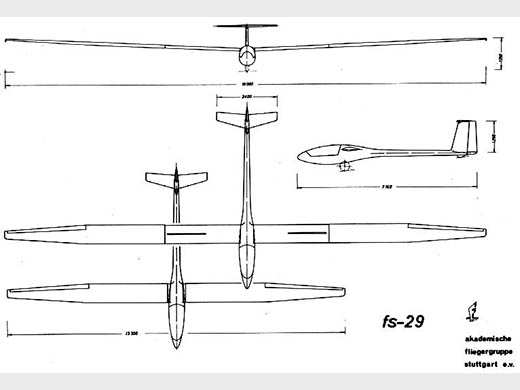 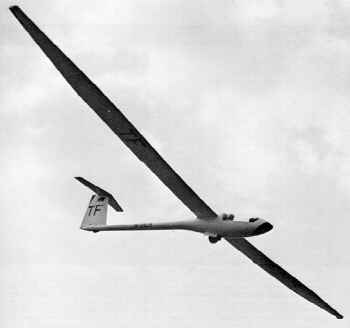 The pilot had to move a lever in the cockpit repeatedly back and forth to move the wing. The concept worked well in theory, but hit a snag in practical life: When moving in, air had to be pressed from the outer wing which would impede fast movement. Much worse, however, was that on the way outward the wing would need to be filled with air and would suck itself stuck on the inner wing. The resulting increase in friction made pilots leave the wing at 17 m span for the rest of the flight after having "pumped" it in and out two or three times.

This experience made Schempp-Hirth abandon their half-built prototype of a glider with a telescopic wing. Somehow, nobody thought of adding winglets with rudders which would had made it trivial to create the side force necessary to move the wing gloves.

I suppose you could attempt to design a system that could be towed to altitude by another plane and then the special aircraft could dock with it using procedures similar to in-flight refueling.

Now the question I don't think you asked but should be addressed is whether this would be feasible. I would expect that it isn't for several reasons:

Not the answer you're looking for? Browse other questions tagged aircraft-design wing glider or ask your own question.

6
Can planes flap their wings like birds?
20
Could a blown wing ever be powerful enough to lift an aircraft at zero forward velocity?
23
Would an aircraft with contra-rotating propellers longer than the plane's wingspan be able to fly?
27
Why do the wing tips on the Boeing 777X fold up instead of down?
3
How can I find the optimum chord wing length for this wing?
8
Have bi-wings been used without creating more drag?
12
Can anyone explain the reflex wings used in powered paragliding?