Have bi-wings been used without creating more drag?

However this is usually at the expense of added drag as both wings are accelerating the same air downwards causing interference and creating inefficiencies. Also the wings commonly have supporting wires/structures between them causing more drag.

With that said biplanes do have some desirable characteristics like shorter roll response. I also realize when looking at how nasa calculates for the drag coefficient, wing aspect ratio is a major factor in their equation:

With this information it would seem to me if you could separate the wings of a biplane far enough apart that they don't cause much interference, you could possibly get a better performing aircraft with the same wingspan.

I almost imagine it being as simple as making the tail a full sized wing and giving each wing a thinner aspect ratio. However I've never seen this done before or even attempted. Is there a reason for this? Would the wings still interfere too much with each-other.

Moving the wings vertically apart would mean more and heavier supporting structure, but also a higher pitch moment of inertia. Since this grows with the square of the vertical expansion, a biplane with a lot of distance between both wings will be hard to control and very sluggish.

If all you have to power your airplane is a heavy, inefficient piston engine like those at the beginning of the last century, and you can tolerate that your aircraft won't fly fast or far, a biplane is indeed the lowest-drag solution.

As for "making the tail a full sized wing", this is a reasonable idea and it has been tried on quite a few designs. Such configuration is called tandem wing. Perhaps the best known example is Quickie: 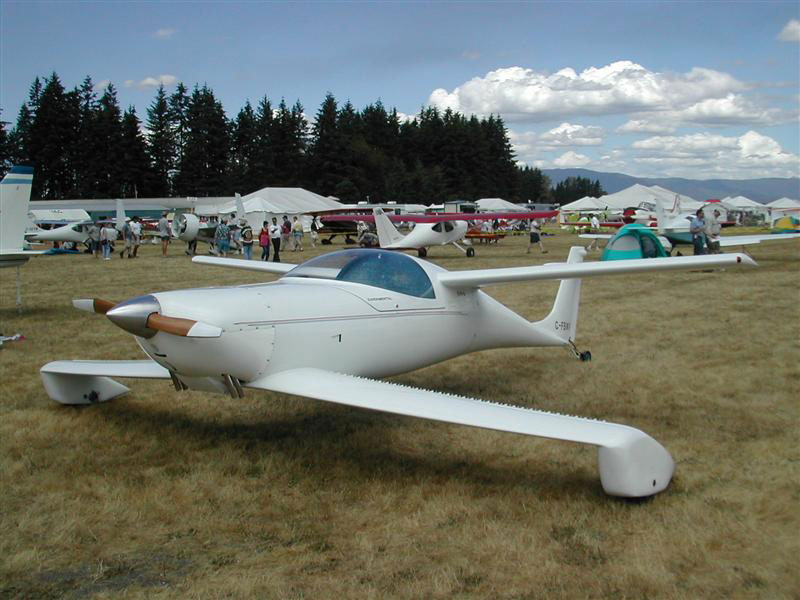 Purely aerodynamically, tandem is better than biplane, due to both the wing-wing interference and the lack of horizontal tail. However, tandem doesn't have the structural benefits of the biplane (see Peter's answer) and so must be heavier. In which conditions it may be preferential to the classical design deserves a separate analysis, but given the scarcity of such airplanes, they must be quite narrow.

Your question of "better performance" can be yes or a no, depending on what you're after. Engineering is a management of compromises. Understanding the pros and cons of a biplane design will prove that the disadvantages usually outweigh the advantages, but perhaps not- again it depends on what you're after.

Engineers have learned things over the last 100+ years- Stacked wings will not generate twice the lift of a single wing, their aerodynamics interfere with each other BUT you will absolutely get more lift than a single wing of the same span.

Remember wingtip vortices kill lift, and you'll have four wingtips. Stacked wings always add drag. If you have two cantilever wings you could reduce the drag from whatever struts and wires you eliminate over the older designs, but it will still have more drag of all sorts than a monoplane. You might like simpler wing design as biplanes have greater STOL performance without flaps, The compromise here- you'll have a tougher time handling that much wing in a crosswind.

Flaps give you flexibility of higher lift and a lower stall without so much wing area. Plus you'll really need to slam the stick forward if you have an engine failure, these planes really slow down fast.

Back in the day biplanes were hard to beat. The first monoplanes had just as many wires, the first cantilever wings were poorly made and killed a few people, which made pilots deathly afraid of them. Change is hard to push onto people when the tried and true works so well like good lift and high strength, but the solutions are so well understood today the biplane's only advantages are maybe some margin of higher strength, Easy inexpensive strength, greater lift in a given span, short wings roll faster and an awesome look and experience.

Novelty can be fun, and you do gain some things with trade offs. I'd say don't quit if you like the idea, do it. They certainly do fly and can fly well, and you could improve on it. If you just want to fly Cable trussed biplanes give you inexpensive, easier to design strength. You might have a lot of fun- but you won't improve fuel economy, safer ground handling, speed or a longer glide.

21
What dictates the aspect ratio of an aircraft's wing?
20
Do box-wings suffer from induced drag the same way as normal wings?
5
Is the compressibility of air the reason high aspect ratio wings are more effecient
7
Why don't solar powered aircraft use wings with more surface area
4
I analyzed 2 nearly identical flying wing in XFLR5, how come the one with the thinner tip chord has a higher cD?
1
What justifies a biplane over a braced monoplane?
9
How have engineers managed to increase commercial airliner wing aspect ratios over time?