Why was the Sukhoi Su-47 Berkut never adopted for service?

This is a rather long question, since I try to cover the historical background which might not be widely known. If familiar with it, you can skip to the "highlighted sections".

As part of the programme equivalent to the U.S. Advanced Tactical Fighter (ATF), aimed at producing a 5th generation multi-role fighter aircraft, Russia (then USSR) produced (like the U.S. programme) 2 competing designs: one from Mikoyan and the other from Sukhoi. These were the canard/delta Wing 1.42/1.44 from Mikoyan and the FSW (Forward Swept Wing) Su-47 from Sukhoi.

Initially running parallel to the U.S. programme, due to mounting financial difficulties and the eventual collapse of the USSR, the 2 prototypes were ready more than 5 years later than their respective US counterparts (The 1.42/1.44 prototype was completed at 1994-5 but performed its first flight in 2000 while the Su-47 was completed in 1992-3(?) and flew in 1997).

Even before the collapse of the USSR, though, the Soviet Air Force had chosen the Mikoyan design as its next 5th-gen fighter.

Yet, after USSR's collapse, Sukhoi was able to finance its own project and have it ready earlier, while also running an R&D programme and further evaluating/improving the design. By the time the Mikoyan MFI performed its first flight, the Su-47 was already taking part in air shows while serving as a testbed for various technologies (many of them finding their way to PAK FA). 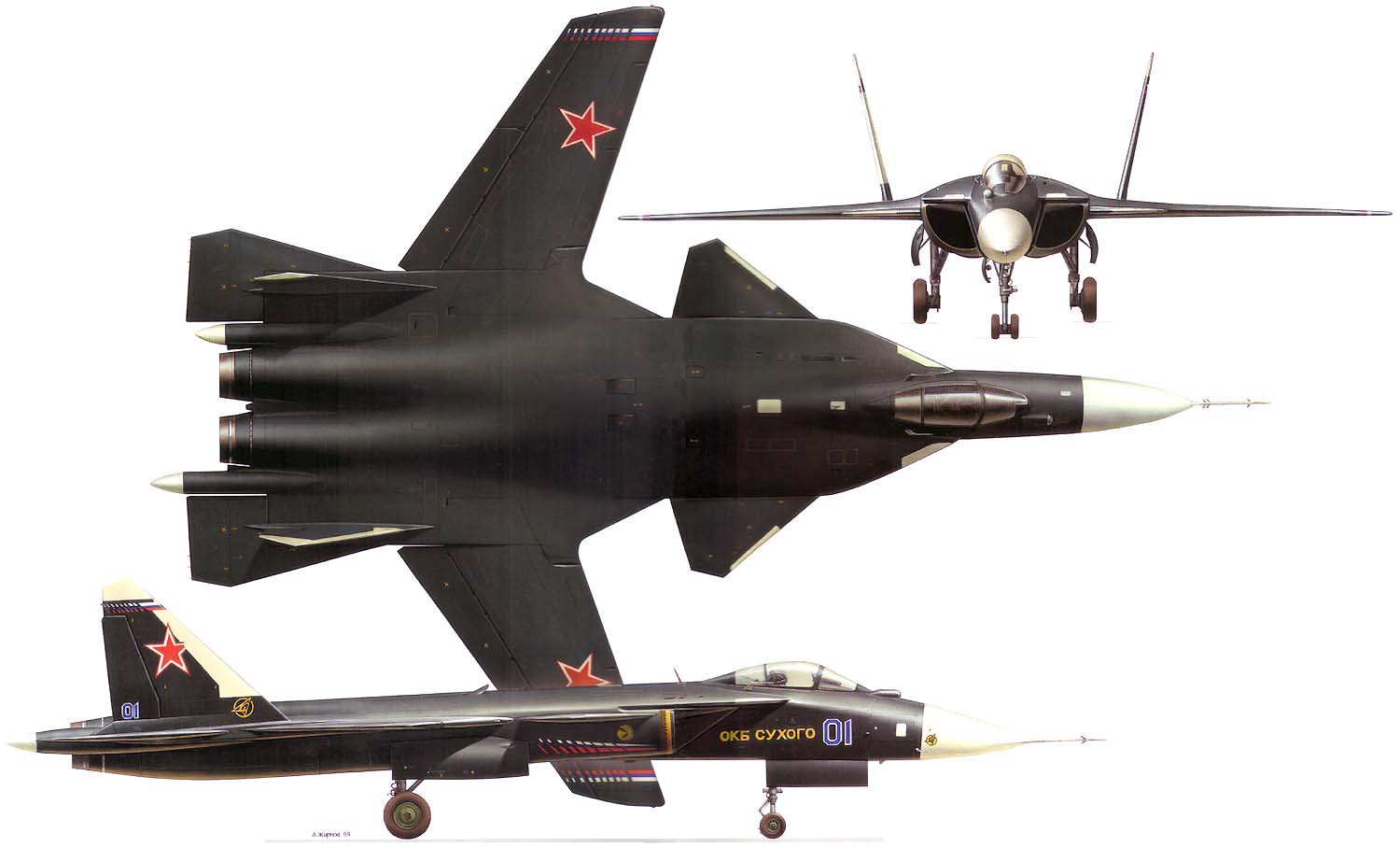 This raises a number of questions, all relating to why the Su-47 was not chosen, neither before the USSR collapsed, and secondly why it was not chosen in the 90s by Russia as it was clearly a design in a more mature stage.

Was the basic design premise-that of a FSW fighter aircraft-flawed?

Were the problems facing this configuration, relating mainly to wing durability, still insurmountable?

To be precise, a FSW design offers superior manoeuvrability, especially in low speeds, retaining an AoA (Angle of Attack) undreamed of by a "conventional" fighter, is essentially spin-proof, it has a better lift/drag ratio, lower stalling speed while it can help with low observability characteristics (Stealth) as radar beams impacting the wings are reflected to the fuselage , ideally one with a comprehensive RAM (radiation absorbent material) covering.

But a FSW design has a major drawback-the loads that accumulate on the wings during manoeuvring, are much greater than in a conventional wing, leading easier to deformation and structural failure. The Su-47 tackled this problem by making extensive use of composite materials for the wings which offer greater durability at less weight.

If the FSW design was viable, was it a matter of economics?

After the USSR collapsed and Russia embarked on economic "reforms" its defence budget shrank dramatically for a decade and new procurement was very difficult. But after 1999-2000, gradually funding increased and when the need for a 5th gen aircraft became again apparent, the PAK FA (Sukhoi T-50) project began, around 2005.

But given that a design was already ready, namely that of Su-47, why not save all the expenses (PAK FA development is in the range of 10 billion US$) while gaining in terms of time?

I usually do not like to speculate on "What if?" historical scenarios but had the Su-47 been chosen, say in 2003-4, by now RuAF could have fielded a fleet of 100+ airframes (assuming initial production starting at about 2008-9). 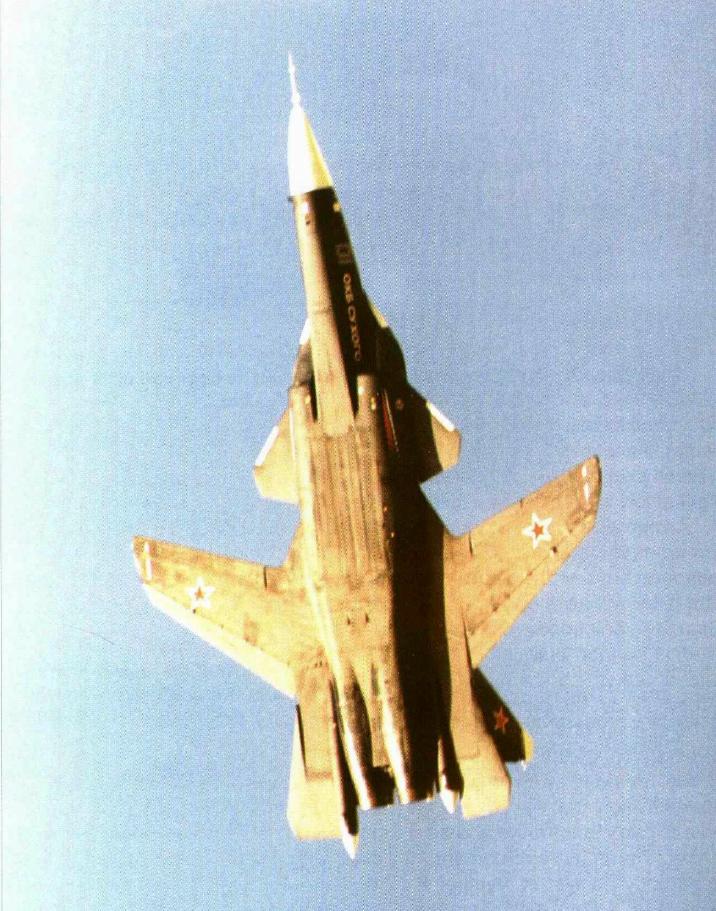 I do not have inside knowledge, but think it is easy to explain why the Su-47 did not progress beyond the prototype stage:

I have to admit that when I first saw the Su-47, I was scratching my head and wondered what the Sukhoi engineers were thinking when they proposed this design. But I had similar reactions when the Boeing X-32 was unveiled …

Now it seems the engineers at Sukhoi put what they learnt on the Berkut to good practice when designing the SR-10 two-seat trainer (ainonline.com). The reason for the forward sweep is excellent handling at high angle of attack – however, this bleeds energy quickly and can only be used in few corner cases in air combat. But it certainly helps for pilot training if the possible angle of attack regime is large.

Third generation fighters had invested their entire design into a certain set of attributes, most notably high speed and a powerful radar. The idea was that they would rush in, fire their missiles, and run away. Against a slower aircraft with a less powerful radar and shorter range missiles, they would be largely invulnerable.

Unfortunately, plans last until they meet the enemy. In this case they met them over Vietnam, where they quickly learned that getting rid of all other performance niches was a very bad idea. Although the MiG-21 was by no means a very responsive aircraft, it still managed to outperform many US designs. Worse, given the weapons of the era, notably the AIM-7's relatively short range, meant that most engagements would end up in or near visual combat anyway.

The result were the fourth generation designs, which still mounted a powerful radar, but were now designed to be much more maneuverable as well. They had mission statements like "not a pound for air to ground", meaning the aircraft should be as light as possible in order to improve its maneuverability, and damn any other mission. The result were designs like the F-15, F-16 and Su-27, with considerable amount of wing area and powerful engines intended to push out the performance envelope.

Technology changes. Through the 1980s we saw the introduction of the AIM-120, which reliably pushed engagement range out well beyond visual range, and stealth concepts to reduce detection range. Later, we saw the introduction of GaAs TR modules that could be used to build a AESA radar that fit in a fighter, constantly shifting and spreading across frequencies so other aircraft didn't even know it was there.

And thus opened a new performance niche, the fifth generation. Such designs retain all the maneuverability of the fourth, but combine that with a radar and stealth that means they will always see the enemy before the enemy sees them. Ideally, combat between an F-22 and any other aircraft should result in the enemy only realizing they're being attacked when the AIM-120's seeker goes active seconds before impact (likely not even long enough for the RWR to notice).

In this respect, the fifth generation works something like the third. However, because of the range of the missiles of the 1960s, the "advantage range" was on the order of a few miles. With the reduction in detection range via stealth and the increase due to new missiles, now it is so large that the F-22 has huge volumes of space where it can fly around completely invisible to the enemy, and because it knows where they are, it can maintain this invisibility by choosing its location carefully.

Now let's compare that with the Su-47. Here are the design goals for that aircraft:

As you can see, almost all of these are improvements on the fourth generation concepts. There's nothing in there about reducing detection range or improving its radar's stealthiness. This is also a big honking design, which a fifth generation design will see at some significant portion of 100 km, place themselves in an advantageous position, and shoot them down. Large numbers of such aircraft could deny this by spreading themselves out and netting their radars, but the cost of these machines is so high that was simply not a possibility.

So basically the world passed the Su-47 by. It is simply not a competitive design.

The Su-47 was started as an advanced multi-role fighter, and first was designated S-37 (do not confuse for Su-37). Later it was selected as an advanced carrier-based fighter, renamed to Su-27KM, which is Корабельный Модифицированный (Korabelny Modifitsirovanny, Modified Carrier-based), and then Su-47 (when it turned to be just an experimental platform, I suppose).

Due to financing shortages only 4 instances were built, all at the expense of design bureau.

Its forward-swept wing design along with wide use of composite materials was selected in order to achieve better handling at low speeds and heights.

The reason for it never adopted for service I see further modifications of Su-27(K), as well as lack of aircraft carriers in Russia. Also, development of Su-37 with thrust vector control engine made possible to achieve supermaneuverability at low speeds for Su-27. Still, many technological achievements made during the development were later used in PAK-FA.

(Also, PAK-FA is not going to replace Mig-29s, since later are short-to-medium range interceptors, while Su-27 is a multirole fighter with almost twice dry weight, range and payload).

Among other factors: timing

When we take a look at certain dates:

we see that the first flight of the Su-47 coincides with the end-of-90s recession if Russia, see GDP of Russia since 1989.

So we may suspect, that there simply wasn't the financial backing available from official Russia to introduce a new generation of fighter jet. In the light of economic difficulties it was the prudent way for the Russians to stick to the tried and tested Su-27 family.

The fact, that Sukhoi funded development out of its own pocket may also serve as an indicator that the Russian military never intended to introduce the type.

Not the answer you're looking for? Browse other questions tagged fighter experimental-aircraft russia su-47 sukhoi-pak-fa or ask your own question.

6
Why is the F-16 still in service?
5
Why did the YF-23 never enter service?
8
Why was the experimental MiG 1.44 so similar to the experimental TKF-90?
5
Why do the engines of the PAK FA (Sukhoi T-50) seem not to be not aligned parallel to each other?
7
Why do forward-swept winged fighters have the main wings in the back?
11
What is this item on the nosewheel of the Sukhoi PAK-FA?
5
Was the F-4 Phantom the only fighter to be in service for the US Navy, Air Force and Marines?
20
What is the asymmetric feature on the rear of a Sukhoi Su-47?
8
What is the purpose of classifying fighters?