What aircraft would have these tail numbers?

Last night I was looking at a flight radar on my phone, and I saw two blips flying close to each other over Camden, NJ. They were heading northeast at around 250 knots, and the only information displayed was their registrations, listed as 1678c37 and 1678c38. A google search of these displayed no results. Are these military or other special aircraft?

The two aircraft in question were actually only one. Apparently it was a glitch in the FR24 system. It was an Embraer ERJ-190AR, registration number N949UW on flight AA1678 from ATL to LGA. 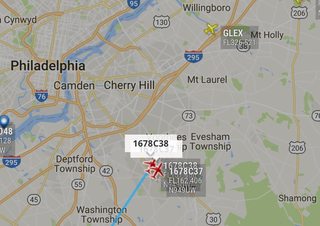 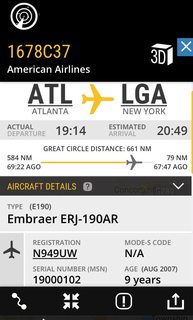 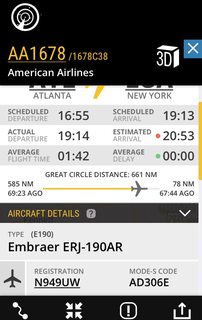 This also pretty much validates sweber's assertion that the numbers are internal FR24 codes, because the mode-S ID is AD306E.

I'm convinced this numbers were fligtradar-internal identifiers, nothing concerning the flights themselves. The following is not an answer, just what I know about flightradar data records and where to find data like yours.

The flightradar website on a computer updates its data by requesting this url, which contains coordinate bounds, filter settings and so on:

I guess the mobile app is not different in this point. The answer from the server is a JSON object like this:

There is one line per aircraft, starting with a 7-digit, lowercase hex number, followed by any information about the flight in square brackets. (You can easily identify position, course, speed, registration, aircraft type and so on.) From the structure of the file and from the fact that you can observe many subsequent hex numbers when you collect lots of data, it seems the first number is a flightradar-internal identifier, acting as counter. Whenever a new flight is detected, it gets the next number.

Within the square brackets, the first number seems to be the unique 6-digit hexadecimal (=24-bit) aircraft ID @JScarry mentioned (and the third entry, a glider, doesn't have one). But more interesting is that all data here is uppercase. (And according to this site, text messages from the aircraft like flight ID doesn't have upper/lower case)

Now, you have two subsequent, lowercase 7-digit hex numbers. This really looks like the flightradar-internal ID. So, maybe flighradar had a glitch, or it had absolutely no further information about that flights, and displayed the internal ID instead. What doesn't fit is the range, right now the numbers are about 164.000 (decimal) ahead. (EDIT: It can fit, they record 140.000-175.000 flights per day)

One can also retrieve data about flights with a certain internal ID from flightradar, but with your numbers, I get an empty record.

Yet, I think it was an internal ID, and you won't get the answer outside of flightradar.

Aircraft equipped with Mode S transponders transmit a unique 24 bit aircraft ID, in addition to a 4 digit transponder code (squawk). There are two ways of displaying this unique ID, as an 8 digit xxdecimalxx octal number or as a hexadecimal value. Your examples are are hexadecimal values and translate as xxx23563319xxx and xxx23563320xxx 131706067 and 131706070 in xxxdecimalxxx octal.

There is a tool at http://www.avionictools.com/icao.php to convert an aircraft registration to Mode S 24 bit ID for US and Canadian aircraft. (I checked it with mine and it works.) Different countries use different algorithms to create the ID's - some (such as Sweden) publish lists, others don't.

You can download the aircraft registration database for the USA at http://www.faa.gov/licenses_certificates/aircraft_certification/aircraft_registry/releasable_aircraft_download/

Given that the numbers are sequential and they are flying close together at a high rate of speed, I suspect that you are right that they are military.

Not the answer you're looking for? Browse other questions tagged military transponder surveillance mode-s or ask your own question.

4
Can repeated call-signs be present in one day?

15
Are civilian/GA pilots expected to “see and avoid” fast military jets in VMC?
15
Do US military aircraft have tail numbers beginning with “N”?
17
What are these aircraft at AMARG? Why are they dismantled this way?
7
Partial Serial numbers on Military Aircraft - what combination is unique?
18
Why do the transponders introduce codes instead of using aircraft registration numbers?
10
What are these aircraft at the Naval Air Weapons Station China Lake?
10
Why does the MiG-15 have a cruciform tail?
7
How do military fighter aircraft identify themselves and each other?
11
What are these accelerating flare countermeasures called?
6
What are these protruding elements from SU-27's tail?