Do pilots have procedures and safeguards against unintended altitude captures?

Most advanced autopilots with a guidance panel allow you to select an altitude and fly to it. It will often switch over to an altitude hold mode if the airplane is close enough to the selected altitude and the flight conditions like current vertical speed are right. My question is about how vigilant the pilot has to be to prevent this altitude capture from happening at the wrong moment.

The Garmin G1000 manual describes the behavior like this:

However, this preselected altitude stays on as the flight proceeds, including during most mode changes. There are some mode changes where this old altitude could cause problems if it initiates an altitude capture, like a transition to a go-around mode or an approach mode. (For an example, see "A Sea Level State Of Mind" in this newsletter). The autopilot would try to reach the old altitude once conditions are right (which may require turbulence or other conditions to make the AP think it's trying to fly to the preslected altitude). The plane would be doing what the pilot previously had told it to do, not what he was directing the plane to do at the moment.

From a human factors perspective, having the autopilot follow the old altitude target in a problematic scenario would make the system easier to understand, but would require more mental work from the pilot to maintain mode awareness. Under certain conditions this altitude capture could potentially create a safety issue if the autopilot doesn't otherwise mitigate the sudden motion in an unintended direction. 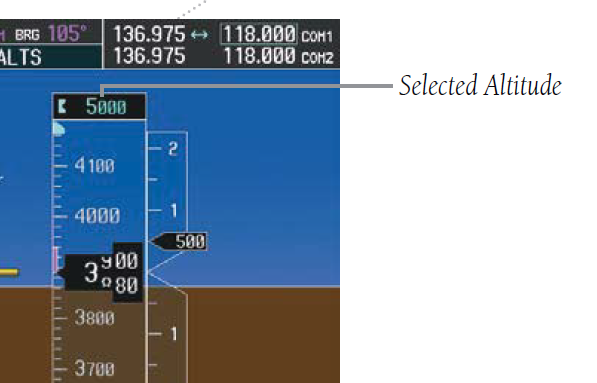 ALT ACQ is always armed when flight directors and/or autopilot is engaged in a climb/descent mode (V/S, VNAV, LVL CHG, TO/GA, CWS P), it is however, as you suggest, inhibited in G/S and G/P (glide slope, glide path) modes.

HOWEVER, performing a Non-ILS approach in V/S or VNAV, the set altitude WOULD be captured on descent. To avoid this, the approach MDA is usually set on the altitude selector, and kept there until sufficiently (typically 300 ft) below the missed approach altitude. When passing through this altitude, the missed approach altitude would be set (logic is implemented to make sure the altitude is not captured during the "winding up" of the selected altitude).

Lastly, performing a Non-ILS using IAN (Basically Boeing's solution for performing Non-ILS with ILS display and control laws, using FMC data), the final descent would be performed in G/P mode, which behaves roughly like G/S mode, eliminating the use for initially selecting the MDA.

5
Is it possible to disengage only one axis of a two-axis autopilot?
2
Why does a dual-axis autopilot not allow operation in single-axis?
6
Why are callouts of changes in the Flight Mode Annunciator not automated?
9
How does an Airbus pilot decide whether to use HDG-V/S or TRK/FPA guidance?
7
What is the relationship between "automatic flight control system AFCS", "autopilot", "flight director" and "flight management system FMS"?
1
What is the vertical speed limit when altitude mode is engaged?
13
Is there any obvious warning when auto-pilot is disengaged or when the mode changes?
6
Why does an A300/310 in LAND or GO-AROUND mode have to be at least 400 feet AGL for manual control column movement to disengage the autopilot?