Why does an A300/310 in LAND or GO-AROUND mode have to be at least 400 feet AGL for manual control column movement to disengage the autopilot?

Each of the A300/310’s two autopilots has two modes of operation:

The FMS has several modes that it can function in when commanding an autopilot in CMD mode (BASIC, ALT, LVL/CH, PROFILE, HED/SEL, NAV, VOR, LOC, TAKE OFF, LAND, and GO AROUND modes).3 In most of these modes, applying a force greater than 150 newtons to the control column will automatically disengage any autopilot(s) that were engaged in CMD mode.

Originally, applying manual pitch inputs to the control column with one or both autopilots in CMD mode would not disconnect the autopilot(s), no matter what the aircraft’s height AGL was or in what mode the FMS was feeding commands to the autopilot(s).

Although the situation is now much better than it originally was, why does the A300/310’s autopilot system still remain active, and trim against the pilots, if manual pitch inputs are applied below 400 feet AGL in LAND or GO-AROUND mode with one or both autopilots engaged in CMD mode?

3: The required-control-input data from the FMS can also be fed to the aircraft’s flight-director system, allowing the pilots to fly the aircraft manually under FMS guidance.

4: To make things even worse, the pilots cannot use their yoke-mounted electric pitch trim switches to alleviate the autopilot-induced mistrim, as these switches are deactivated when one or both autopilots are engaged; instead, they must take one hand off the control yoke (while still continuing to maintain the large amount of force needed to counter the autopilot’s trim inputs) to rotate the manual pitch trim wheel mounted on the aircraft’s center console (which is mechanically connected to the stabiliser jackscrew, turns it directly, and disconnects the autopilot when used).

5: Information on all four occurrences is from the AAR for the April 1994 accident.

After the crash of China airlines flight 140, Airbus released an Airworthiness directive, AD (SB A300-22-6021) which made it mandatory for carriers to bring in the corrective modifications to the aircraft auto flight system within 24 months after the release of the directive. The modification allowed the aircraft autopilot to disconnect if a certain amount of force is applied to the control column above 400 ft AGL.

You can read the AD by going to the link below:

This directive however, did not enforce any amendments to the aircraft auto flight system below 400 ft. Thus, even with SB A300-22-6021 modification, if the aircraft is below 400 ft in LAND mode and if the pilot overrides the autopilot, it will continue to trim the aircraft to keep it on the scheduled flight path. If not careful an out of trim situation in this scenario is very likely. Airbus hesitated to change this, because they had concerns of a pilot overpowering the control column and disconnecting the autopilot in an automatic landing in low visibility conditions. They feared that the tripping off autopilot at such a low altitude in bad weather could make the pilots lose control of the aircraft. But changes had to be made.

So, about a year after the previous directive, in 1997 Airbus released a new AD (SB A310-22-2044). This AD enforced operators to make the modification to the aircraft which disconnects the aircraft autopilot if enough force is applied by the pilot even when below 400 AGL.

Here is the link to that AD:

The A300s and the A310s we have today have these modifications in place. So, an out of trim event in flight is highly unlikely. Below is an excerpt from an A310 manual which confirms that. The force required on the controls to disconnect the autopilot below 400 ft with LAND or GO AROUND mode is still designed to be higher than that at above 400 ft to prevent an inadvertent autopilot disconnection during an automatic landing. 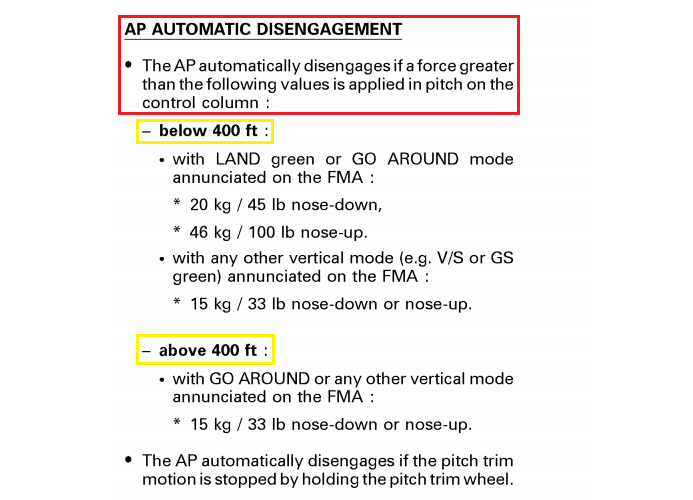 Not the answer you're looking for? Browse other questions tagged safety approach autopilot airbus-a310 airbus-a300 or ask your own question.

3
Why are the A300/310’s electric pitch trim switches inhibited with the autopilot engaged?

6
What is the role of a flight control computer during a steep approach?
9
Do pilots have procedures and safeguards against unintended altitude captures?
9
How does an Airbus pilot decide whether to use HDG-V/S or TRK/FPA guidance?
7
Are there any autopilots that are capable of landing a damaged aircraft better than any human?
13
Is there any obvious warning when auto-pilot is disengaged or when the mode changes?
9
What does it mean when autoland is fail passive / fail operational?
3
Why are the A300/310’s electric pitch trim switches inhibited with the autopilot engaged?