What is the requirement of a higher glidepath/approach angle and is this a flight safety issue?

To reduce noise in the London urban area, Heathrow airport has announced plans to trial a steeper approach for aircraft landing - changing from 3 to 3.2 degrees. If this is successful, they will further steepen the landing approach to 3.5 degrees. Moreover, London City airport uses a 5.5 degree landing approach.

What are the requirements of higher angle landing approaches and how do they affect flight safety?

The most important sources of noise in an aircraft (especially during landing) are the engines, the slats/flaps and the gear. An aircraft’s angle of descent has an effect on the noise experienced by people below. Steeper the angle, the less time an aircraft spends at low altitudes, which means that fewer people should be affected by higher levels of noise.

The reduction in noise (as experienced in Frankfurt airport) due to steeper (3.2$^{\circ}$) landing approaches are due to the following:

The differences due to changing the glideslope to 3.2$^{\circ}$from the present 3$^{\circ}$ is shown in the following image: 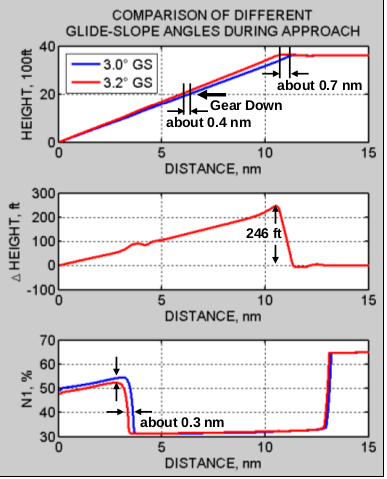 Image from Experience with the steeper approach angle of 3.2 degrees - Presentation by DLR

As for safety, this system is expected to pose no problems as most aircraft and pilots are easily capable of doing this. As an added measure, the trial is only being carried out when visibility is good (Cat I) and the trial is optional (for aircraft using ILS anyway).

Some airports (like London City) have very steep landing approaches for clearing obstructions and may require special certifications and aircraft modifications.

Since normally the criteria for stabilized approach is that vertical speed does not exceed 1000 ft/min, the 5.5° requires different procedure with different criteria.

Vertical speed equals power ($P = mgv_v$ where $m$ is mass, $g$ is gravitational acceleration and $v_v$ is vertical speed) and to maintain speed, the engines have to develop less power by this amount, or drag has to be increased.

This is usually not a problem for propeller aircraft, especially those with variable pitch propellers (which turboprop requires and larger piston-engined aircraft have as well). With maximum RPM selected the propeller produces quite a lot of drag at idle, but since everything is already spinning fast, adding power has immediate effect if needed to go around.

It may, however, be problem for jet aircraft. Jet engines need to spool up to increase thrust and from very low power settings that can take several seconds.

The normal glide-slope is well below the gliding angle with no power (with flaps and gear), so the engines are still running at considerable power. In the slightly steeper approaches the power is less, but the difference is not as big, so it usually isn't a problem.

But the 5.5° steep approach is getting close to the unpowered glide angle even with full flaps and gear and is steeper than unpowered glide angle with lower flaps settings. This means the engines will react more slowly and pilots have to consider it. Also in some aircraft an engine-out approach can't be flown at full flaps, because the remaining engine(s) would not have enough power for go-around at that drag, which means such aircraft can't fly steep approaches with failed engine. And some aircraft may not be permitted to do these steep approaches at all, because even at full flaps the engines would run too slow and take too long to spool up.

What is the requirement of higher angle landing approach?

Is basically requiring the aircrafts to stay at higher altitudes for longer and approaching the ground faster. The normally used term is "glideslope".

how does it affect flight safety?

The airport authorities will have performed a safety assestment and decided that this change would not sensibly affect flight safety. What will change is how the pilots will have to perform the flare manoeuver (a bit more sharply than before) and for unexperienced students might lead to a higher rate of hard landings, but I doubt that there are many student pilots landing with airliners at those airports.

Not the answer you're looking for? Browse other questions tagged safety landing airport or ask your own question.

4
What are the driving factors for performing a steep approach

14
Airline safety: what happened between 1959 and 1962?
6
Where to do the Run-up and Safety on the Return Flight?
9
What are the safety concerns and efficiency benefits of two in-line runways?
2
What are the safety demonstration time-constraints?
9
What safety mechanisms prevent thrust reverser deployment in mid-flight?
2
What is the requirement for fire fighting equipment on board a passenger flight?
11
What were the safety recommendations following the Aeroperú Flight 603 crash?
4
Does anyone know what this approach chart symbol is?