How are pushbacks coordinated between the pilot and the tug?

When the pilot (PIC) of a large jet is cleared for pushback and start, how does he signal the tug to start towing the aircraft, and where to go to?

The pilot has to monitor the ground frequency the whole time, so is there a second radio for talking to the tug crew? Or perhaps a wired link between the aircraft and the tug?

Does he just tell them to "take us to start point alpha" or whatever, or does he have to give more detailed instructions?

Are the tug crew listening in to the instructions from the tower?

If the aircraft has to stop unexpectedly (because of an instruction from the tower, or because the pilot has a safety concern), how is this coordinated safely?

Generally speaking1, when an aircraft is allowed/ready to leave (deliberately not using the word depart) the gate, things proceed in the following fashion:

I have read that different airports have different procedures for the above mentioned activities. Although, I have always seen that a person from groundcrew attaches a headset near the nose gear of the aircraft (picture below) to communicate with the pilot. 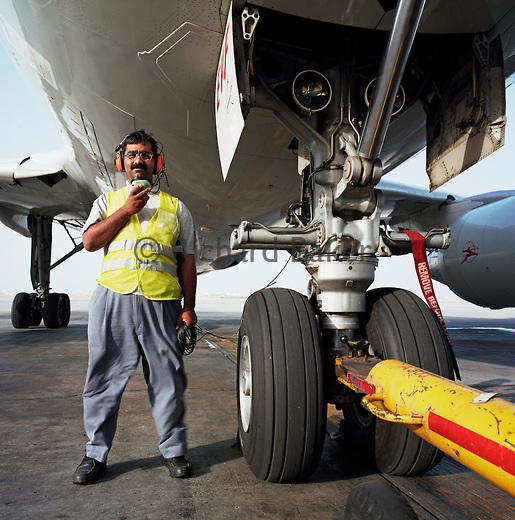 Image Source
Please see the cable connecting the headset with the aircraft, near the nose gear. You cannot follow the entire cable though.

1: This is what a typical scenario looks like. Although, there can be great variations.
2: Engines are not started near the gate as there is groundcrew servicing the airplane and to avoid damages to close-by structures.

Not the answer you're looking for? Browse other questions tagged airliner radio-communications pushback or ask your own question.

14
Do airliners have horns for use on the ground?
4
Is the Auxiliary Power Unit used after landing when ground power is available?
1
After an aircraft releases the parking brakes, can the pushback vehicle's brakes hold it in place?

13
Do bluetooth aviation headsets and/or music negatively affect safety?
16
Why are turbine-powered aircraft "considered ready for takeoff"?
6
How do pilot and copilot operate and coordinate the radio?
8
How is the pushback tug connected to the airliner?
4
What is the difference between COM and Auxilary COM signals?
20
What is the meaning and difference between CTAF, UNICOM and MULTICOM in the US?
18
What are the differences between ACARS and CPDLC?
8
How are multiple frequencies monitored at once?
2
What are the radio characteristics of communications between tower and aircraft?
7
How unusual were MH370's final ATC exchanges?