Is there any difference between Airbus and Boeing on yaw damper technology?

I have to do some research on this topic and haven't found any answers yet.

The difference is more between conventional flight controls vs. fly-by-wire rather than Airbus vs. Boeing.

Both Airbus and Boeing used separate yaw dampers in their non fly-by-wire aircraft, which applied their commands with separate actuators to the rudder control servos, without feedback to the mechanically linked rudder pedals in the flight deck. The exact details will differ for every aircraft of course, but the general design is quite similar. Consider e.g. the Airbus A310 and the Boeing 747:

The rudder is controlled by 3 actuators, which are commanded by a single cable run from the rudder pedals. Rudder artificial feel is provided by a spring-loaded rod.

Additional inputs to the rudder come from: 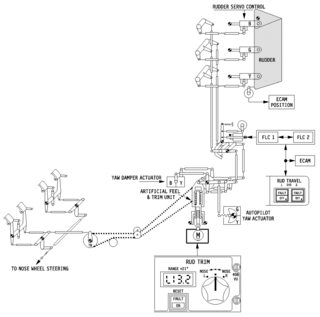 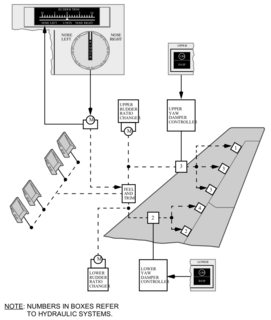 On the other hand, fly-by-wire aircraft usually integrate the yaw damper logic into the fly-by-wire commands sent to the actuators. Consider e.g. the Airbus A320 and the Boeing 777:

The yaw damping and turn coordination functions are automatic. The ELACs compute yaw orders for coordinating turns and damping yaw oscillations, and transmit them to the FACs.

Three independent hydraulic servojacks, operating in parallel, actuate the rudder. In automatic operation (yaw damping, turn coordination) a green servo actuator drives all three servojacks. A yellow servo actuator remains synchronized and takes over if there is a failure.

There is no feedback to the rudder pedals from the yaw damping and turn coordination functions. 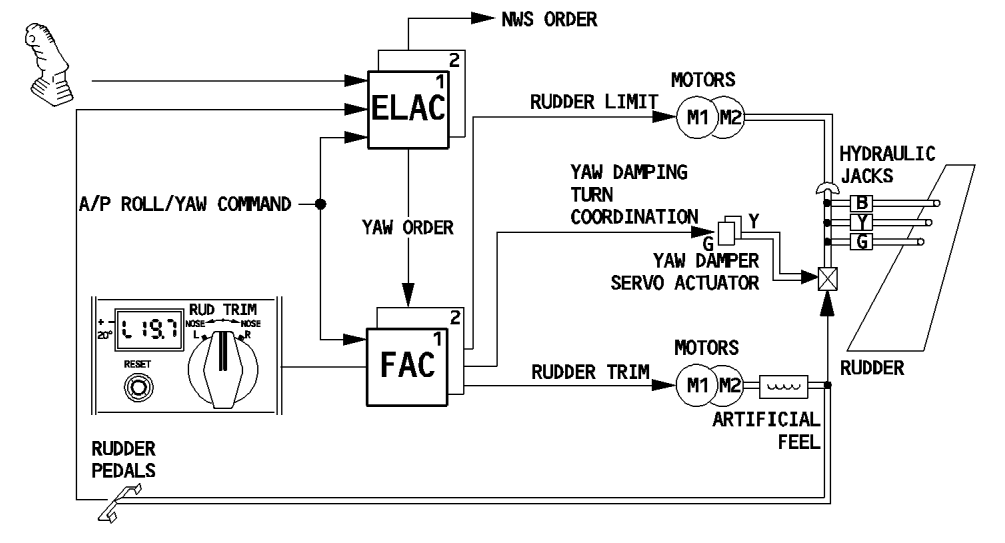 The yaw control law contains the usual functionality employed on other Boeing jetliners, such as the yaw damper and rudder ratio changer (which compensates a rudder command as a function of airspeed). However, the 777 FBW rudder control system has no separate actuators, linkages, and wiring for these functions, as have been used in previous airplane models. Rather, the command for these functions are calculated in the PFCs and included as part of the normal rudder command to the main rudder actuators. This reduces weight, complexity, maintenance, and spares required to be stocked.

Not the answer you're looking for? Browse other questions tagged airbus boeing yaw-damper or ask your own question.

14
What is the difference between autopilot and fly-by-wire system?

22
Why do Boeing and Airbus have distinctively different nose designs?
20
Are there any airliners not made by Airbus or Boeing?
21
Could the Boeing 787-9 near vertical takeoff demonstration be performed by Airbus A350 aircraft?
4
How can you identify an Airbus and or Boeing from the inside based on features of the interior?
15
Do Boeing and Airbus learn from each other?
4
Is there a significant difference between the jet blast from Airbus and Boeing?
7
How can I switch off the yaw damper in an Airbus A350?
5
Why is the 707’s yaw-damper-out lateral controllability marginal to nonexistent with flaps and spoilers extended?
1
How do Airbus and Boeing aircraft handle Dutch roll?