How is US Class B airspace enforced in Canada?

Detroit, MI is the center of Class B airspace, however a good portion of that airspace within the inverted wedding cake is in Canada. What are the mechanisms that allow US to define Class B airspace force and effect in Canada?

The portion over Canada is not designated US Class B but Canadian Class C.

Note that Canadian Class C airspace definition is similar to US Class B. In particular, VFR aircraft must obtain clearance prior to entry. A mode C transponder is required.

To add: airspace over Canada is generally managed by NAV CANADA. Definition for the Canadian side of the Detroit Terminal Control Area (TCA) can be found in NAV CANADA's Designated Airspace Handbook, portions excerpted below (from page 78): 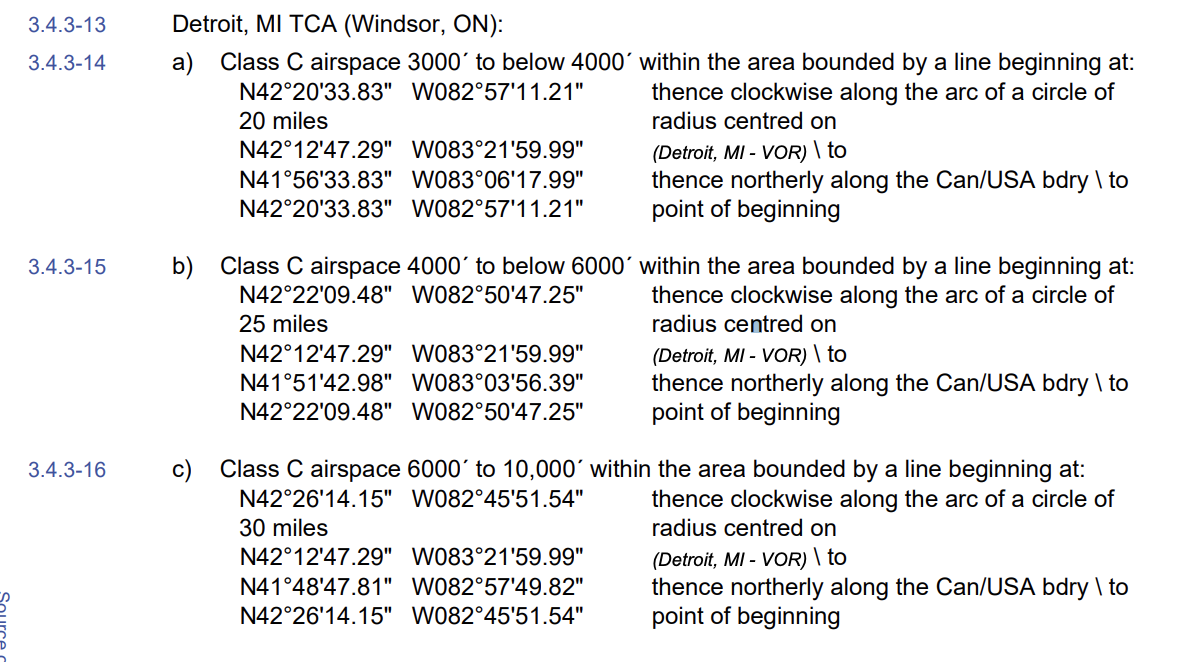 We can see that these definitions matches the eastern portions of the Detroit TCA exactly, e.g, the outer area altitudes from 6,000' to 10,000' bounded 30nm from the Detroit VOR (DXO).

The Detroit TCA airspace was modified a few years ago, which required coordination between the FAA and Nav Canada. The following discussion from the US Federal Register (page 3307) may be of further interest:

All airspace in each FIR (or UIR) is by default controlled by the corresponding ACC (US: ARTCC). In the case of metro Detroit, it's Cleveland FIR/ARTCC on the US side and Toronto FIR/ACC on the Canadian side.

9
What requirements are needed to fly an approach that requires you to fly over the US/Mexico border?

11
How would ATC try to establish contact with a VFR craft?
4
When is a transponder required below class B airspace?
12
Which parts of class E airspace can an ultralight (part 103) fly in without prior ATC authorization?
3
How is collision avoidance regulated in controlled airspace in Canada?
4
What exactly is the airspace above CYYZ (Toronto)?
10
What is the primary reason that the non-towered airports ACV, TVL, SGU, BIH, and SIT/PASI have E4 extensions to E2 airspace?
3
In the US, can airspace simultaneously be E2 and E4? What happens at KSTC to the airspace in the dashed magenta boundary when the tower closes?
0
At what altitude, if any, may an ultralight overfly the Gallup airport (KGUP) with no prior authorization without violating FAR 103.17?
3
What indication has the FAA given that phrases like "surface area of Class E airspace designated for an airport" do or don't include E4 "extensions"?
0
Do the NPRMs & Final Rules preceding 1993 "alphabet" airspace re-designation indicate that these phrases were meant to exclude Class E "extensions"?