What requirements are needed to fly an approach that requires you to fly over the US/Mexico border?

I was flying North of El Paso Texas listening to El Paso Approach when I heard Approach ask a Falcon Jet if they could fly into Mexico to fly a Runway 4 GPS approach. At El Paso, the runway 4 approaches require you to fly across the US/Mexico border into Mexico. What requirements are needed to fly an instrument approach that requires you to fly over Mexico? Would you require a radio telephone permit to use the radio even though you are talking to an FAA controller? 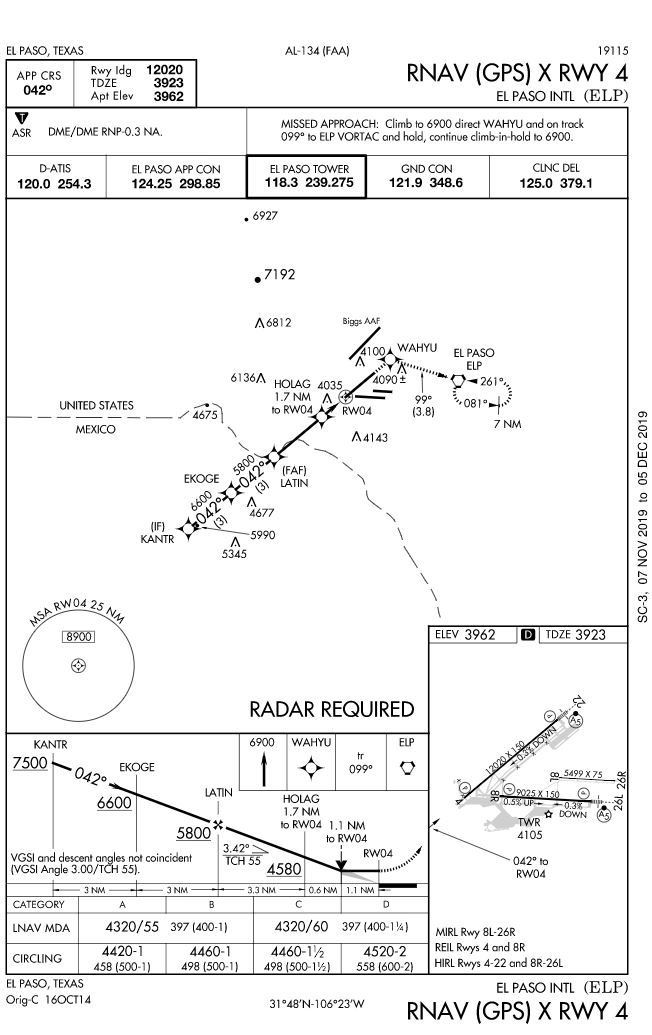 I had flown my plane (small 4-seater) from Houston to California a few years ago and on the way back, I stopped in El Paso to refuel and sleep for the night. While in contact with the tower, following whatever vectors they were giving me, I noticed that I was about to cross into Mexico. It's pretty obvious from the style of buildings and how close they are together that one area is Mexico and the other area is the US, especially at 1000 ft (or less) AGL. I asked the controller if this was correct since it would put me across the border into Mexico. I seem to remember him saying something about they had an agreement with Mexico that allowed them to use / control that airspace.

Aircraft registered in some countries may not be able to overfly other countries without first obtaining a permit or meeting other requirements.

FDC NOTAMS are informative in this regard. Some time ago I was operating an aircraft registered in Europe, flying from Canada to the UK. The planned route crossed northern Maine. I had flown this route lots of times with Canadian-registered aircraft, no problem there. Look at the requirements of FDC 6/4255 (A0006/16) - which is current right now -

With the Europe-registered aircraft, we didn't fall into one of those categories, so were not authorized to transit US airspace, and had to detour slightly to the north to remain in canadian airspace at all times. Had we been US or Canadian-registered, we could have crossed over Maine without issue. (We could have requested an overflight permit, but that would have delayed us more than we wanted). ATC did try to clear us over Maine, but we had to refuse.

Interestingly, there are quite a few examples of airspace near a lot of countries' borders where flight over one country is controlled by ATC of the other country. ATC will happily keep you separated from other aircraft, but a clearance by them is just for that purpose. Their clearance does not imply overflight permission - that is normally the State Department's / CBP purview.

It is possible that Mexico also imposes certain requirements for overflying aircraft - always worth checking.

Also, the aircraft insurance policy may impose restrictions on what countries' airspace can be overflown.

Not the answer you're looking for? Browse other questions tagged faa-regulations instrument-flight-rules or ask your own question.

2
How is US Class B airspace enforced in Canada?
3
Can you fly to a U.S. border airport without any paperwork?