I am experiencing difficulties in finding out exactly how air traffic surveillance works in practice, and more specifically what is done to verify the integrity of surveillance data.

ADS-B and other "modern" surveillance protocols (i.e., protocols relying on data package exchanges, squitters or interrogations) are mostly transmitted in clear-text. The cybersecurity community has been claiming for a decade that there is a high risk of bad data injection which could be catastrophic. Security experts imply that ATC experts are too focused on safety, that they lack a cybsersecurity mindset, etc. The ATC community, on the other hand, has claimed that security experts don't understand the domain well enough to be able to gauge risks, saying that multilateration is always there to evaluate the integrity of ADS-B messages in case of doubt, saying that surveillance is not only these protocols but also voice communication, acars, etc. What I want is not offend either party and get a view as holistic as possible. 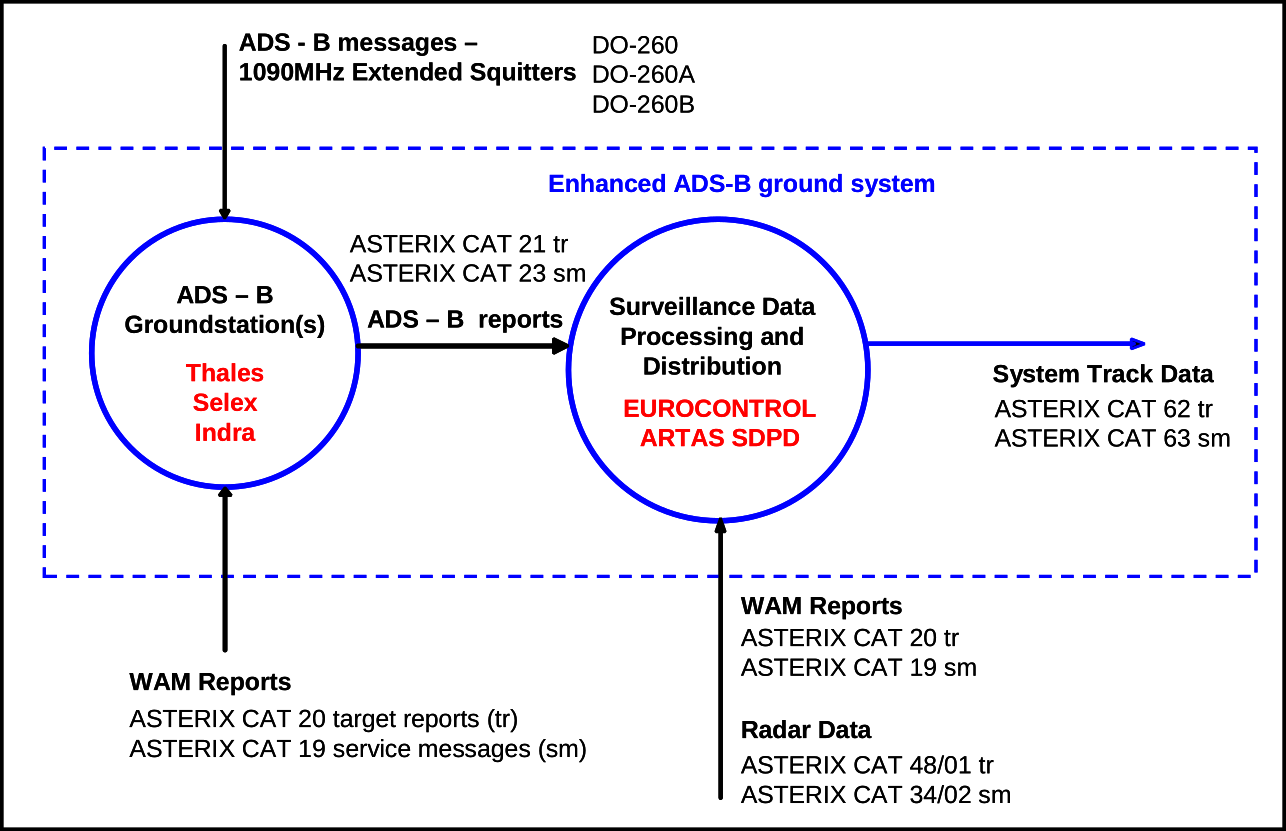 Ground stations capture ADS-B traffic, potentially verify the data using WAM reports, potentially verify the data using other GS reports (not shown on the figure but I think I read it somewhere), then send the data to an SDPD, which can also use WAM reports as well as radar data to check the data. There can be multiple SDPDs exchanging data for even more verification and data fusion. Meanwhile, there are multiple data integrity check, such as angle of arrival measurement, power measurement vs range correlation, etc..

Then, I read that there is also multilateration possible using ADS-B squitters and TDOA with the so called Mode-S BEAST protocol format that provide nanoseconds precision for the timestamps instead of the initial millisecond.

So, what is the real, current state of the practice? Is the EUROCONTROL schema I mentioned above is the norm now and fully deployed, or not at all? What did I miss? Thank you very much.

Browse other questions tagged ads-b security surveillance or ask your own question.

1
Are the replacement satellites for Iridium going to provide surveillance coverage?
5
Can ADS-B DF-17 messages with a non-zero remainder after CRC check be used?
4
What benefits does Automatic Dependent Surveillance bring to continental ATC over Mode S?
1
How to know which data came from Mode S and which came from ADS-B (FIS-B)?
3
In RTCA DO-260B, what were the reasons GVA was added ? Is it a replacement for something?
7
What is the broadcast rate of an ADS-B message?
2
Was NextGen simulated/tested against alternatives?
7
Question about congestion of the 1090MHz frequency