Why would a flight from North America to Asia sometimes fly over the Atlantic?

I am going to take AC031 from Toronto to Beijing in a couple of weeks, I searched its flight path, most of the time it will fly westbound after taking off from Toronto and continue west across the north pole area and land in Beijing, but yesterday it flew eastbound, across the Atlantic, this is very strange since the distance is a little bit more than flying westbound. 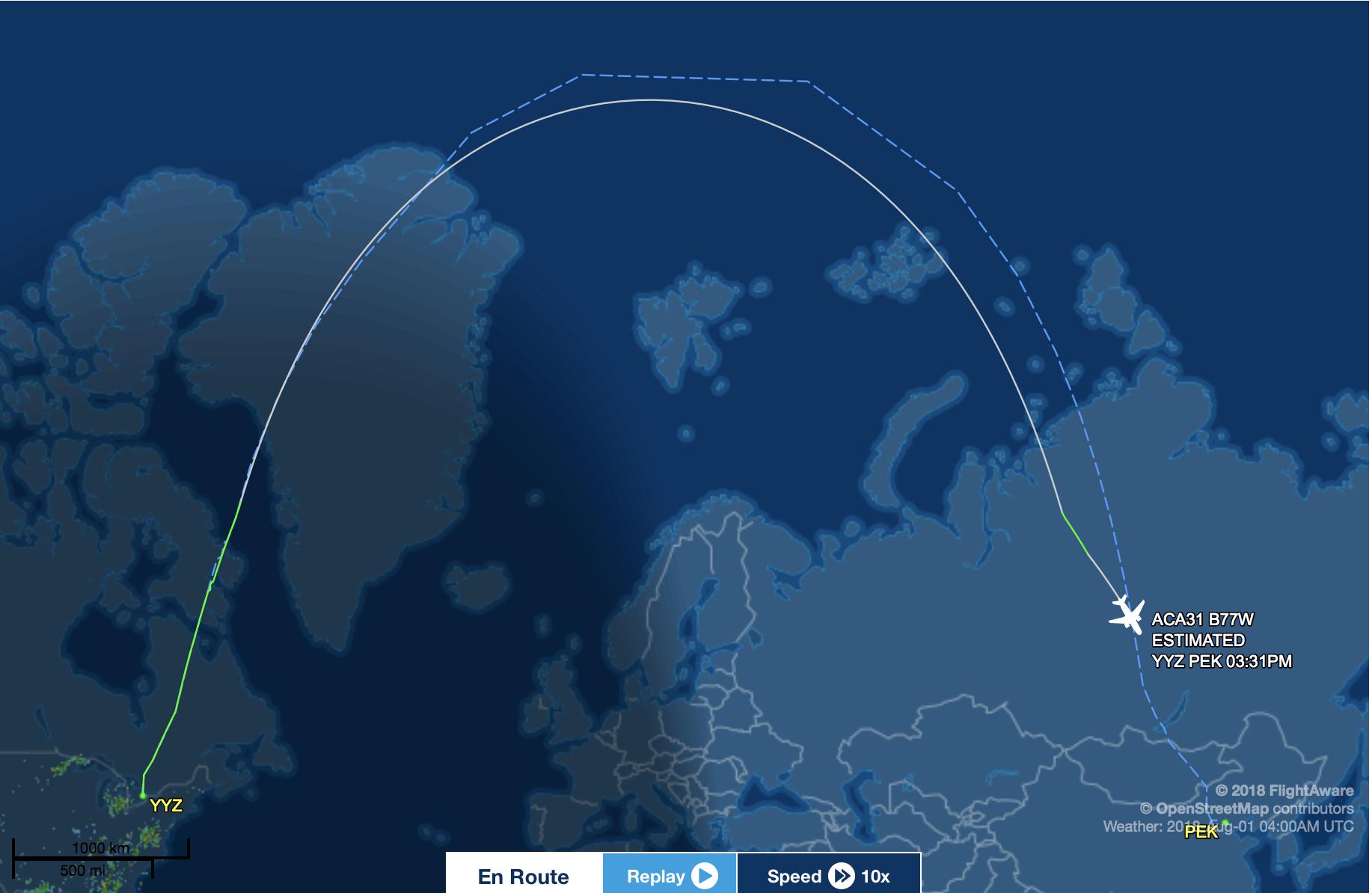 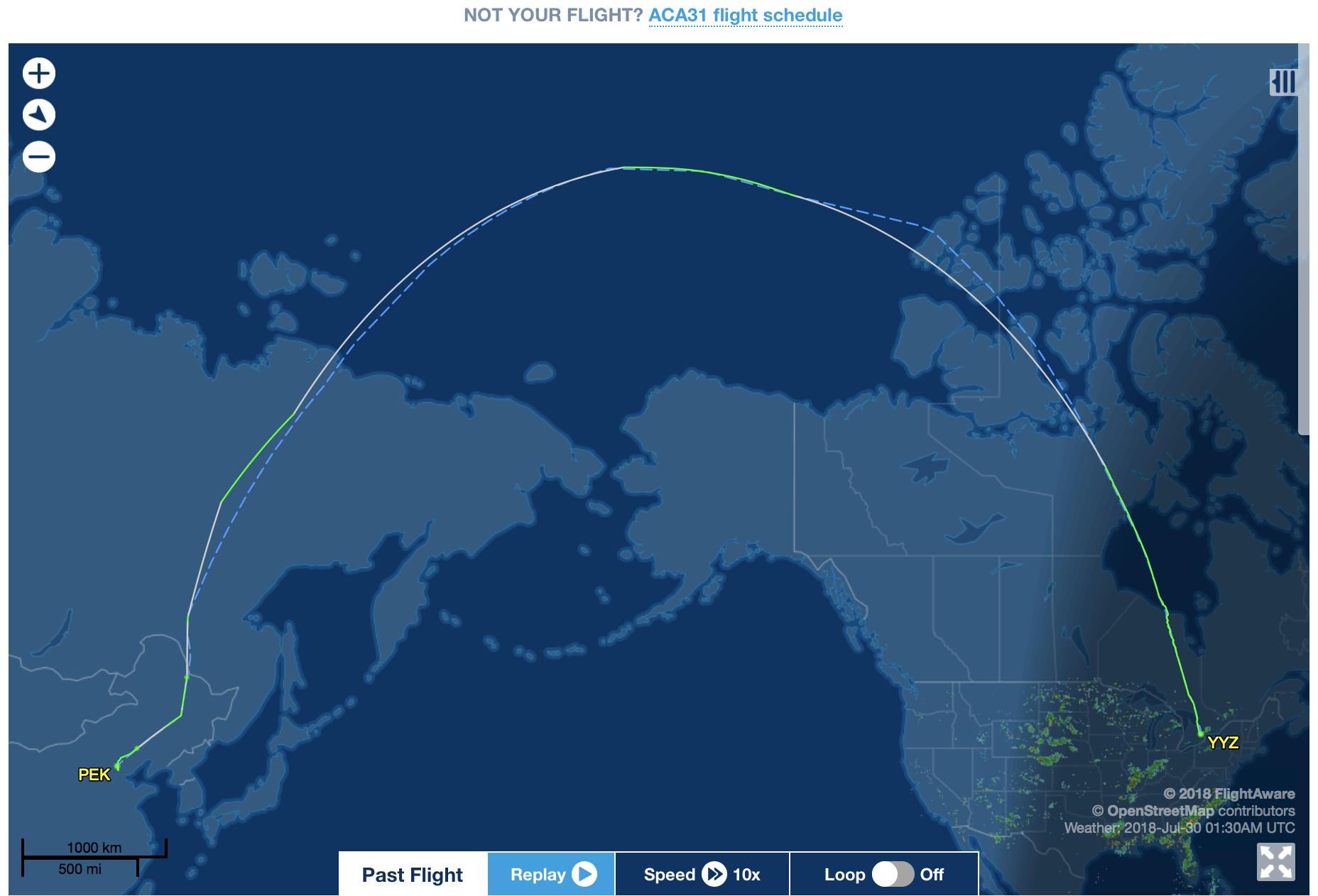 Those routes are extremely similar.

They're basically two almost-a-straight-line routes over the arctic ocean, except that the second one has deviated a bit to the right, so that it's gone just on the right of the North Pole instead of passing by the left. At the pole itself, there's no such thing as "East" or "West", and if you pass very close to it, there is a discontinuous jump between passing it "going East" and "going West".

You can see this explicitly by going to FlightAware, asking to View track log, and downloading the flight tracking data to be viewed on Google Earth: 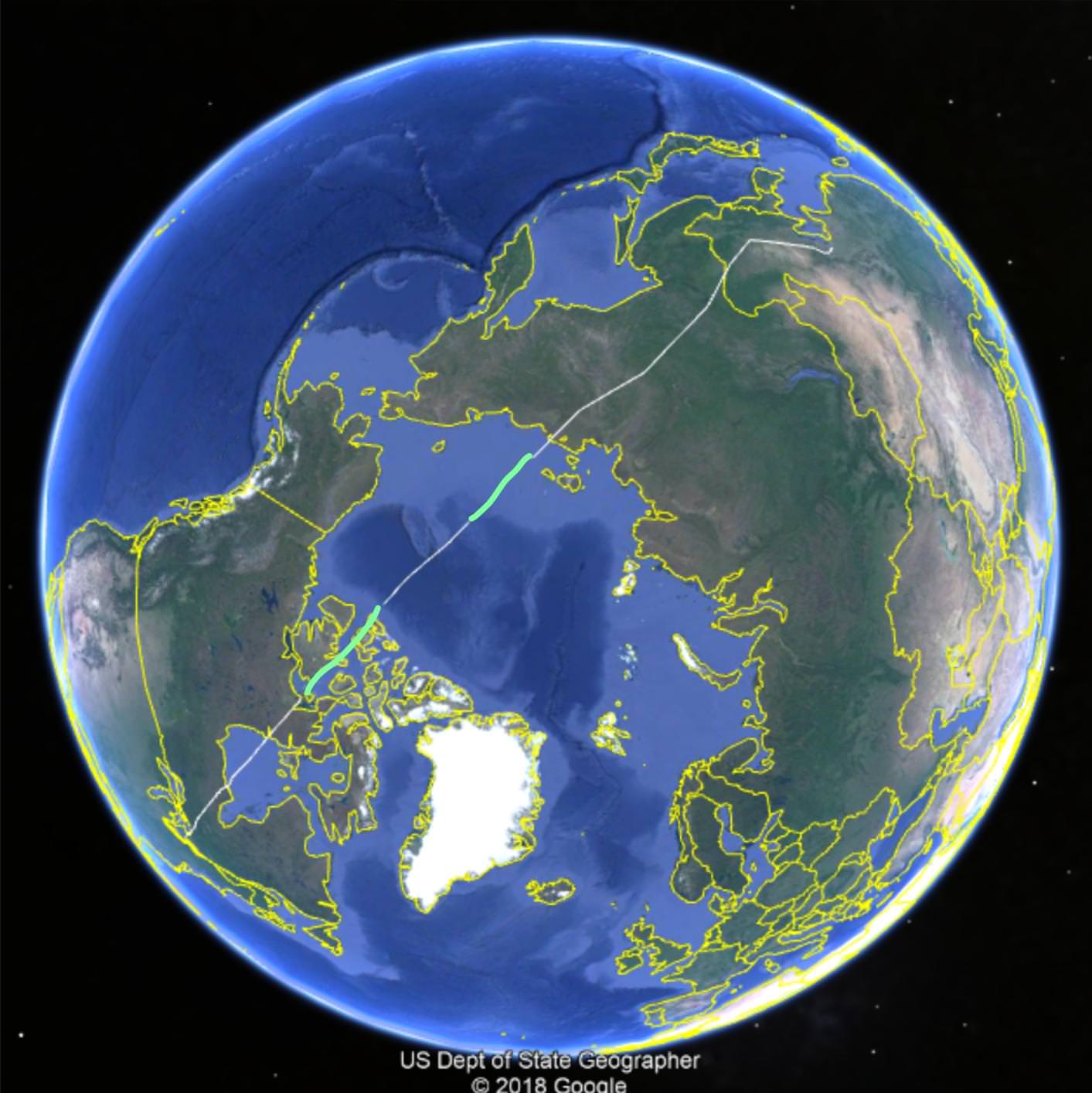 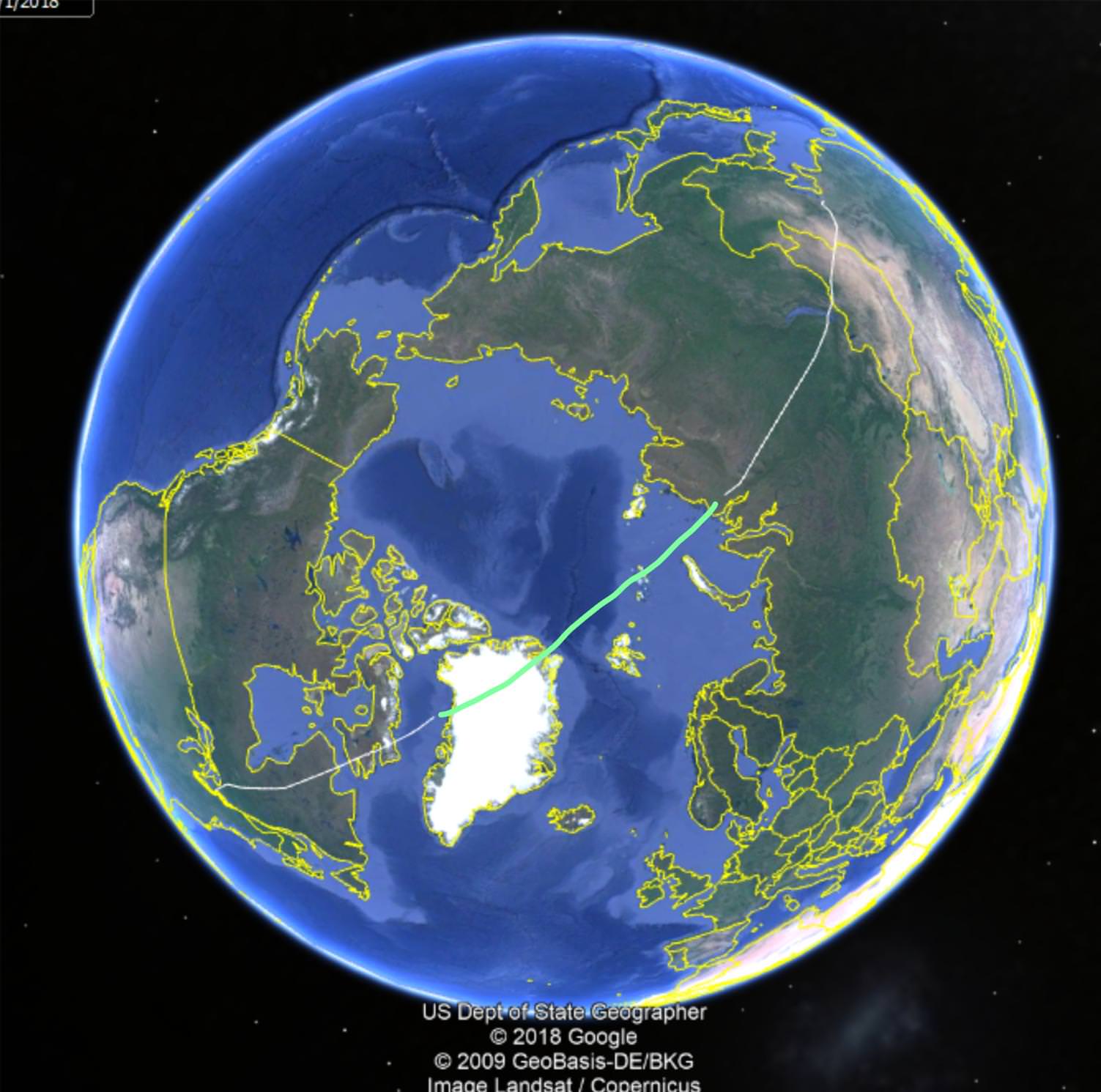 Actual tracking data in white. Interpolations for the missing-data parts in green.

As you can see, there is indeed a nontrivial deviation of what's probably several hundred kilometers in clipping Nunavut vs the northeast corner of Greenland, but that deviation is within the normal ranges of what you'd get in your standard transatlantic flight, say. The only change here is that the variation now includes the North Pole itself.

I took Hewgill's picture and added the routes in the OP (I just eyeballed this, so I won't guarantee accuracy). 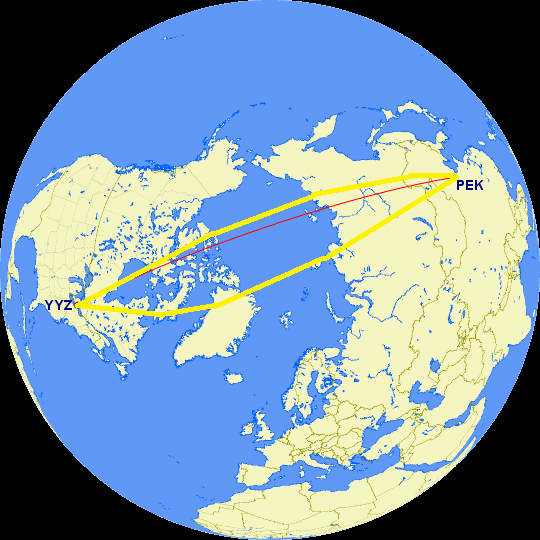 With the FlightAware maps it looks like drastically different routes, but from this angle you can see that both routes are not that far off the ideal route.

The direct route from YYZ to PEK flies almost over the north pole:

Sometimes, routes need to deviate a bit from the "direct" route, due to prevailing winds or other traffic. If your route from YYZ needs to deviate a bit to the right, then it will cross over to the other side of the north pole (which is the very centre of the map above), and your projected map from Flightaware would show it flying "over" the Atlantic. But really, it's just gone slightly to the right of the pole.

The flight did not fly across the Atlantic. Rather, you're seeing the results of stereographic projection.

More specifically, the Earth is Spherical. Navigation needs to be thought of on the basis of a sphere. It is 3-dimensional, and if you have studied sphere geometry, you will know that it defies the rules of geometry we know in 2D - for example it is possible to construct a triangle with three 90-degree angles.

The problem is that 3-dimensional objects cannot be displayed on a map, which is 2-dimensional. Therefore a mathematical formula is used to make a sphere look like a rectangle. The conversion is really skewed for regions near the poles. As a result, you cannot compare distances by measuring them on the projected map.

The route merely deviated slightly to the left in the second picture. However it is still flying over the North Pole, not the Atlantic. The deviation may be due to changes in winds aloft and/or traffic.

0
Why do planes generally curve north and not south?
12
Why are different routes flown between the the same pair of airports?
4
Would a refueling stop be cheaper than finding lodging for all the passengers?

38
Where do I land if I fly from KLAX with a constant east heading, crossing the US and the Atlantic ocean?
23
Why are westbound transatlantic routes located hundreds of km away from eastbound routes?
3
How to find past flight routes between 1977/82 Latin America and the former Soviet Union?
13
Why would Emirates fly over Iraq, avoiding Iran?
20
Why didn't Air India always fly DEL-SFO over the Pacific?
2
Why do aircraft fly over land rather than over the Adriatic Sea?
4
Do stratospheric business and military jets use the North Atlantic Tracks?