Is there a rule of thumb for spacing between jet engines?

While viewing this week's press release for the taxi test of the Stratolaunch I noticed how closely the engines seemed to be spaced. It would seem the ideal position would be near the fuselage to minimize asymmetric thrust.

The B-52 places engines directly next to each other, while the 747 spaces them far apart. Is there a rule of thumb for ideal engine spacing?

[This question deliberately excludes propeller aircraft due to the many mechanical and aerodynamic differences.] 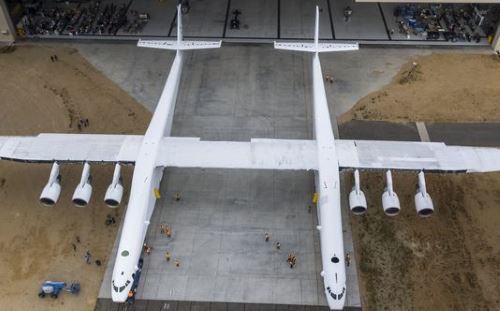 The Stratolaunch engines are approximately one engine diameter apart and very close to the fuselage.

The 747 has much larger spacing between engines (~3 engine diameters) and further from the fuselage.

Engine spacing on the Antonov 225 compared to the 747 is much closer to fuselage but about the same spacing.

Placing the engines farther out is mainly done for bending relief in the wing. Given that the Stratolaunch needs to keep its center wing clear of fuselages and engine nacelles, the engines are out enough already. Moving them farther out would create more thrust asymmetry once one engine fails.

Airliners with a central fuselage are different. We have an answer here discussing optimum engine placement. Why they should not be combined in one nacelle is explained here.

Not the answer you're looking for? Browse other questions tagged aircraft-design aerodynamics jet-engine or ask your own question.

33
Why do we never see high-bypass turbofan engines sharing the same nacelle on large airliners and similar aircraft?
9
How do you choose engine placement for under wings engines?

15
What are the differences between pre-transistor and transistor era jet engines?
4
What type of flow is preferable for jet engines?
2
Is there an alternative (more robust) operating law/setting for jet-engines? After one engine failed?
16
Have we seen the last significant experiments in the configuration of jet airliners?
4
What wing spacing is best for a tandem wing configuration?
32
Why do jet engines smoke?
1
Are high bypass turbo jet engines suitable for tail and body mounted engines