Why do jet engines smoke? 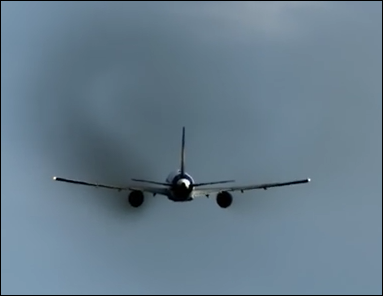 From the video linked above, I was wondering why the engines emit so much smoke? Has something gone wrong? Poor maintenance? Isn't it dangerous?

Smoke in jet engines is usually from unburnt or partially burnt fuel (or by water injection). Early jet engines used to create a lot of smoke due to these reasons (and due to lack of environmental regulations). 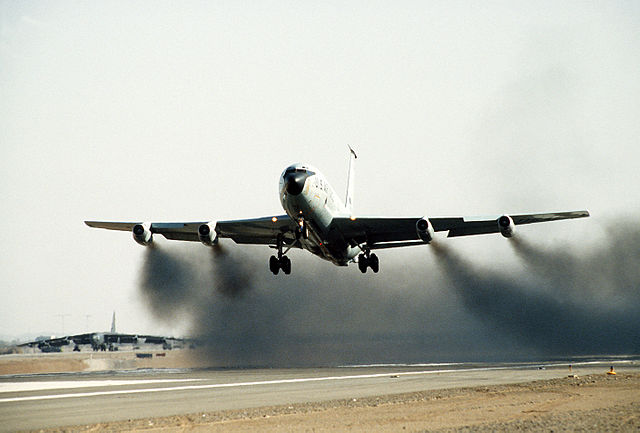 Water injection, while cooling the engine, quenches the flames to an extent, resulting in unburnt fuel, which comes out as smoke. However, aircraft have moved away from water injection, reducing emissions.

Another reason for the smoke is inefficient combustion- older jet engines (turbojets in first aircraft and low bypass turbofans) were not as efficient as engines today, which premix the fuel with air and pre-vaporise it before combustion, rather than using droplet combustion- basically mixing fuel more evenly with air. Requirements of fuel efficiency along with stricter regulations mean that engines today have less emissions compared to their predecessors. 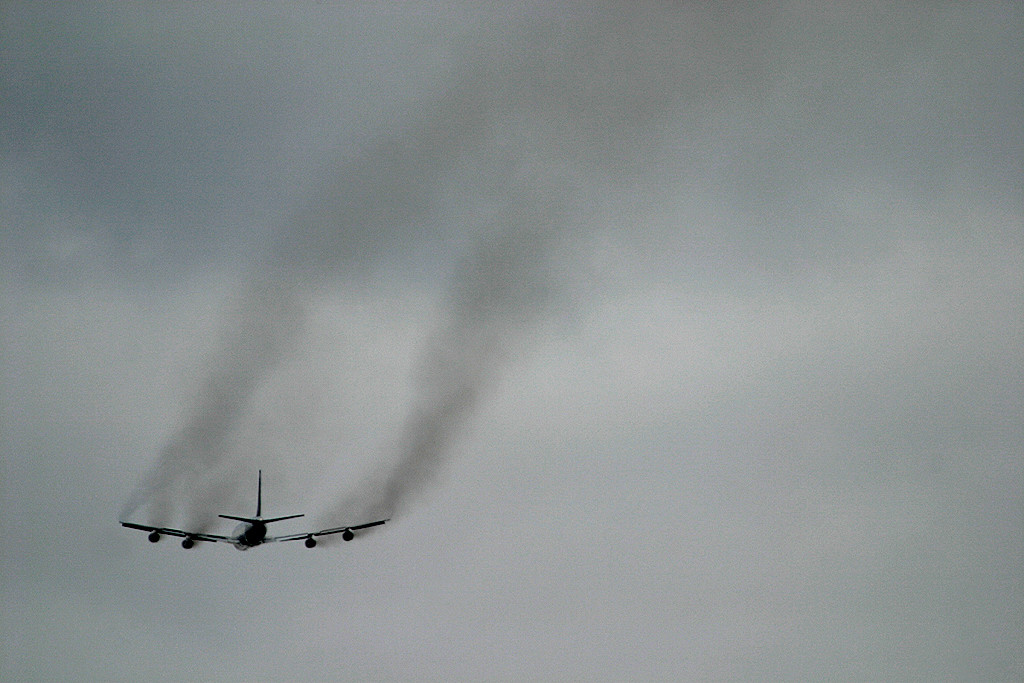 In this case re-engining the aircraft with more efficient ones usually results in a reduction of smoke. For example, the USAF re-engined the KC-135s (from Pratt & Whitney J-57-P-59W turbojet to the CFM International CFM56 turbofan), which along with the elimination of water injection, reduced smoke. 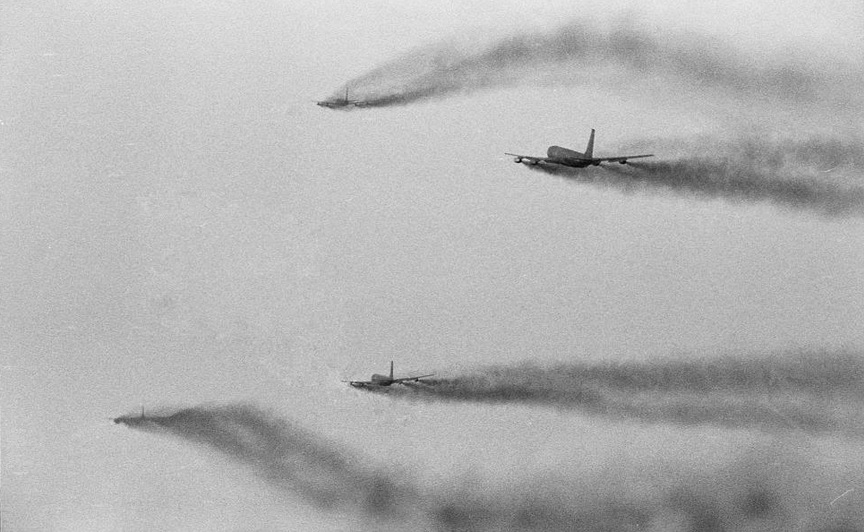 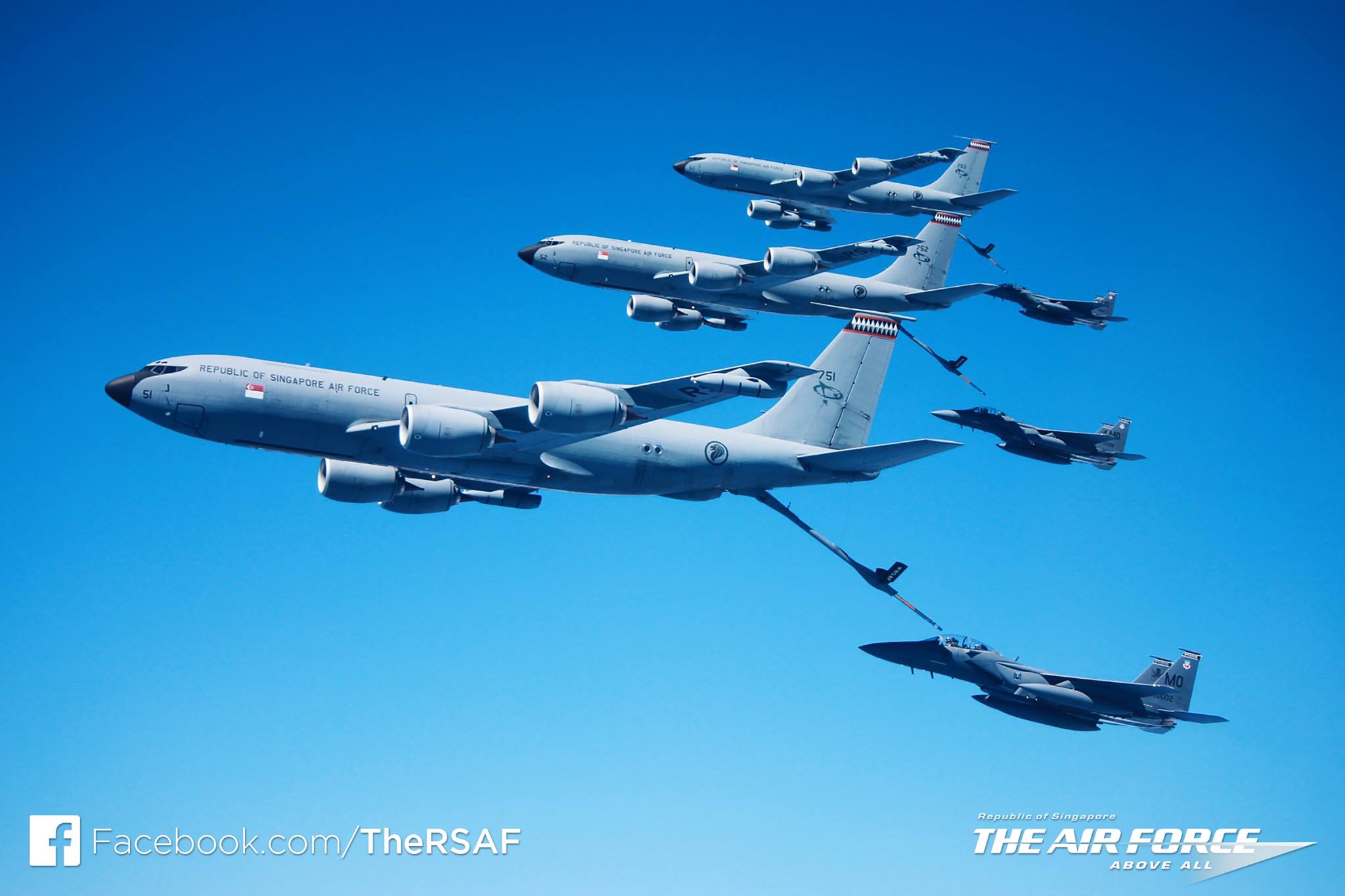 On the top is KC-135s from an exercise in 1979; image from network54.com. Below that is KC-135Rs from Singapore Airforce; image from reddit.com

Fundamentally, because jet engines do not burn a pre-mixed fuel/air mixture.

Fuel can burn in three ratios: lean, stoichiometrically and rich; respectively: an excess of air, exactly enough air, and an excess of fuel. Ideally, one would always burn in a stoichiometric ratio; intuitively, one can feel that this means you don't waste fuel on heating an excess on air, and you're not left with any unburnt fuel. This is how a typical spark ignition engine works: fuel is mixed in the carburetor, compressed and burnt. The throttle varies how much fuel/air mixture enters the engine, but the mixture will always be (close to) stoichiometric.

A jet engine does not have the luxury of pre-mixing the air/fuel mixture before ignition. Spraying Jet-A in the compressed, (hot!) burning air will lead to ignition as soon as it comes into contact with oxygen, whether you like it or not. The problem is that it will already ignite when the local mixture is still rich. This will inevitably lead to soot formation, which is the smoke you see. This is especially prevalant at high power settings (like during takeoff) - at a given RPM, the amount of air that is pumped through the engine is constant, and the amount of power is varied by injecting more or less fuel into the engine, thereby creating a less lean mixture at high power. Note: the engine RPM will react to the power setting in a jet engine; however, the amount of air will generally lag the amount of fuel at higher power settings

There are some methods to mitigate soot formation, which are all based on increasing the fuel-air 'mixedness' before ignition. A lot of research is being done on this by improving the combustor. The linked Wikipedia article has a very nice and thorough explanation on what exactly is being done for this, but in general (and extremely simplified), it comes down to spreading the fuel as much as possible and introducing as much air as possible (but remember that running too lean reduces efficiency), all without dousing the flames. See the image below for the complex arrangments already made in the combuster on an older cannular design. 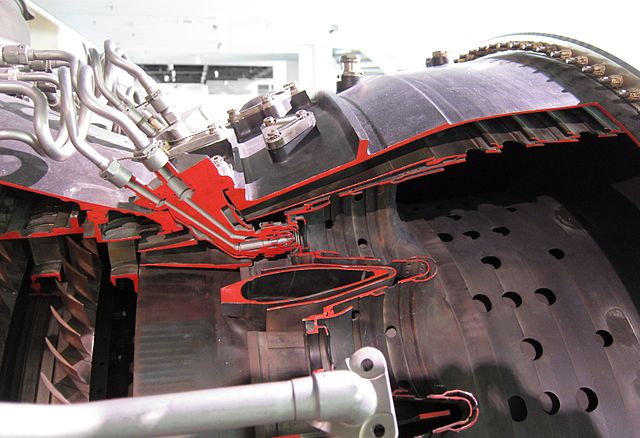 Collin Krum has written a fairly in-depth article on the matter for Jalopnik. It's also worth noting that not all of the engines in that video are jet engines. From the article:

Low bypass engines aren’t as efficient as high bypass engines, but water injection is the technology that is most responsible for the seemingly-eerie pictures of older airplanes riding black columns of smoke into the sky.

Some of the AGE/GSE I work with uses jet engines. During startup and shutdown, surely expect the temperature not to be at its maximum. That can be one cause of unburnt fuel. Another cause could be a gradual buildup of fuel depending on the interval of the pneumatic thermometer's ability to help quench the bleed air.

2
Why B-52 engines produce lots of smoke only during take-off?
5
Which type of jet leaves black trail at cruising altitude?

9
Why does the chevron-shaped engine suffer losses in thrust performance?
37
Why should jet engine throttles be moved smoothly?
12
Why do jet engines take a long time to throttle down?
30
What makes a smokeless jet engine?
8
Why are contra-rotating jet engines so rare?
42
Why is water-contaminated fuel bad, but water-injection is not?
20
Why is a (jet) engine in flight shutdown so critical?
54
Why are engines angled toward the fuselage?
4
Are turbine blisks common in jet engines?