How come a plane flying at constant velocity experiences gravity? If you were in a space capsule flying (not accelerating) you would feel weightless until you hit the ground. Why not a plane?

This is the difference between flying and in orbit. In orbit, you are indeed falling toward the earth, but the spacecraft is too, and you're going fast enough that you keep missing the earth.

In an aircraft, because it's staying aloft due to lift, it is not falling. This is why you experience the pull of gravity on a plane.

Some aircraft are designed to feel weightlessness, see Vomit comet.

Exactly for the reasons we feel gravity when traveling on a train:

Everything is weighty everywhere in the cosmos as soon as it is subject to some acceleration (e.g. gravity acceleration, but not limited to it) and it tries to oppose this acceleration.

So there are only two means to escape gravity acceleration effects:

In both cases, the aircraft and the satellite experiences "micro-gravity" (which means a residual gravity in the order of some $\small \mu g$). Any mass subject to micro-gravity is (nearly) weightless.

For the physicists here, there is actually a single case, as a satellite in orbit is also in free fall and there is no centrifugal force, provided we select the appropriate frame of reference for the observer (an inertial frame). If we wanted to be even more rigorous, Einstein also intuited gravity is actually fictitious (if I may say) itself, an idea which led him to the discovery of the general relativity and the space-time curvature

How come a plane flying at constant velocity experiences gravity?

Micro-gravity never happens in a trajectory at constant velocity.

The reason is because constant velocity is constant speed and also constant direction:

Following their orbit, the direction of their displacement is constantly adjusted, hence velocity constantly varies, which allows them to create a centrifugal acceleration exactly opposite to gravity.

Can we create micro-gravity on a plane (or on a train) moving horizontally?

Horizontal doesn't mean "in straight line". It means at right angle from the direction of gravity (the local vertical), so when moving horizontally on large distances, we are actually following Earth curvature.

If the plane/train follows Earth curvature (hence changes direction constantly), we could in theory achieve micro-gravity, but at the condition we travel very fast, a bit faster than the ISS (27,560 km/h at the current time), about 28,460 km/h. In such case we are in orbit at altitude zero (orbital trajectory doesn't depends on altitude).

This is not possible in practical, an enormous amount of power would be required and everything would melt due to friction.

Micro-gravity in a plane flying a specific curve

But as explained in Can one fly up side down while a glass of water keeps full due to g-forces?, we can create micro-gravity by flying a specific trajectory. In that case, the speed we are missing is replaced by constant changes in direction along the curve. This gives nice videos, like the funny weightless dog with the two unperturbed guys: 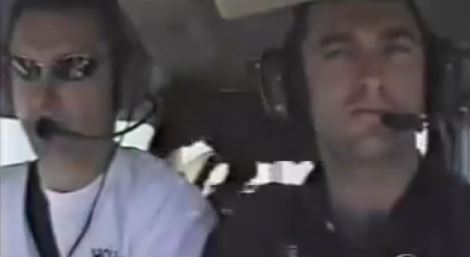 Weightlessness is the consequence of being subject to micro-gravity which can be obtained:

For feasible and durable micro-gravity at low altitude, the two techniques must be combined.

You never actually “feel gravity” at all†, not in orbit, not on a plane and not on solid ground either.

What you do feel on ground is the earth pushing against your feet, with a force that exactly cancels out the gravitational acceleration. As soon as you stop that force, e.g. by cutting the ropes in an elevator, the gravitational acceleration would very quickly change your velocity, downwards, which of course inevitably brings you back to the ground (where it will hurtfully reaffirm its upward force...) in situations like an elevator. We're completely used to that upwards force as the normal state, so much that we don't even notice it as a force and instead talk about the “gravitational down force”, but physically that's not really the force that's there.

In a plane, the situation is much the same: the force you're feeling is the force of air flowing around the wings, pushing the entire plane upwards. Without that force, the plane quickly stops travelling at constant velocity and instead travels ever faster towards the ground.

Now, for a space capsule in orbit, this actually happens as well: here, there isn't any force counteracting the gravitational acceleration, so it is in free fall. But because it has a blisteringly fast horizontal velocity, there's not enough time for it to fall down onto the ground – it “misses the Earth” instead, and thus continues its orbit.

†The only place where you could actually feel gravity itself is close to a black hole, where your body would be getting stretched out by the tidal forces... but that never happens in homogeneous gravity field, and any sufficiently large/distant field is approximately homogeneous.

We are, the speed is not sufficient for this to be easily observable. We are actually a little bit lighter while in a plane, because it is also circling the Earth, just like a spaceship does, but even for SR-71 at top speed (assuming 3540 km/h = 983 m/s) the effect is too small to be sensible:

It is not a gravity, you feel, but the floor (seat etc.) pushing against you. You never feel gravity per se, you feel forces on your body which counteract gravity pull. In the flying airplane these forces come from wings' lift, but in the orbit, there is no such counterforce, so you feel weightless despite gravity is till there.

All the feeling of weight comes to your brain from various strain or deformation sensors in your tissues. So in order to feel weight, there has to be force deforming your body. Homogeneous gravity field (gravity around Earth is homogeneous enough for these purposes) exert exactly the same force on each single point in your body, therefore causing no deformation.

On the other hand, floor, seat etc. supports your body locally only and the force needs to be "distributed" through your body, which causes strain in the tissues and "feeling of weight".

An aeroplane flying does not fly fast enough to become weightless. A person inside an aircraft flying at constant altitude becomes weightless if the centrifugal$^1$ force F$_C$ = $( m \frac{V^2}{R})$ from following the curvature of the earth equals the force from gravity ($m \cdot g$). 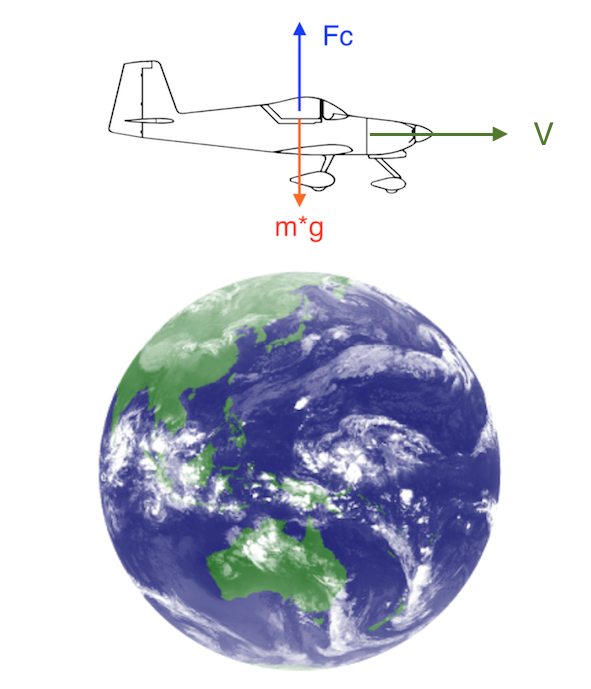 $^1$ makes for an easier to understand graphic.

Consider the "vomit comet" flights, where they intentionally fly the same plunging path that a bowling ball would "fly" if gravity took it. If you simply continued that flight path, you would go SPLAT.

Wings are a funny shape, specifically to create lift. That is so they can create a flight path other than that one.

The answer to this question could not be simpler.

At a given altitude, you need to be going a certain speed, to achieve "weightlessness".

In an airplane, you are not going fast enough.

You are not going fast enough.

(Note that exactly the same could be said of a train or car. If you were going 28,500 mph in a TGV, you would get the "weightless" effect. You would float around, etc, inside the TGV exactly as astronauts float around inside a space station.)

Use this calculator, to know the speed you need for different altitudes:

XKCD covered this in detail. While the other answers cover all the physics angles, XKCD does a great job of bringing the science down to an easy-to-understand level (emphasis mine)

Gravity in low Earth orbit is almost as strong as gravity on the surface. The Space Station hasn't escaped Earth's gravity at all; it's experiencing about 90% the pull that we feel on the surface.

To avoid falling back into the atmosphere, you have to go sideways really, really fast.

The speed you need to stay in orbit is about 8 kilometers per second. Only a fraction of a rocket's energy is used to lift up out of the atmosphere; the vast majority of it is used to gain orbital (sideways) speed.

The fastest aircraft ever, the X15, couldn't stay in orbit because it only traveled at about 2km/s, or 25% of the necessary speed.

In a plane, you're the cannonball marked "A", and the only thing stopping you from plummeting straight into the ground is the lift generated by the wings. 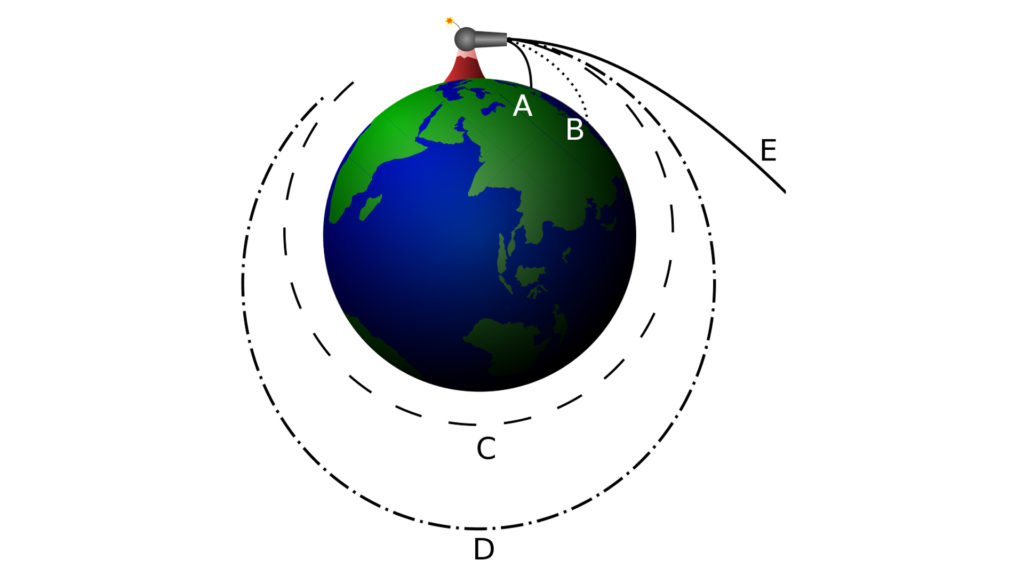 2
Can one fly up side down while a glass of water keeps full due to g-forces?

13
Why can't an airplane stall at zero G?
7
What level of G-force does our body experience when we are traveling in a passenger plane?
6
Why doesn't G-force knock this pilot out twice?
18
People in a rollercoaster or falling elevator feel the rapid descent, so why don't pilots in the cockpit?