People in a rollercoaster or falling elevator feel the rapid descent, so why don't pilots in the cockpit?

Judging from the CVR transcript, the AF447 pilots didn't realize for most of the plunge that they were stalled and rapidly losing altitude.

Why don't pilots in the cockpit get the same sensation of falling down as people in a rollercoaster or a falling elevator ? Both are situations in which you would unmistakeably know you are falling. (If you have never experienced a rollercoaster descent, believe me, it's noticeable ;-). So why and how does it differ for the pilot in the cockpit ? 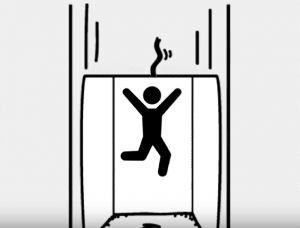 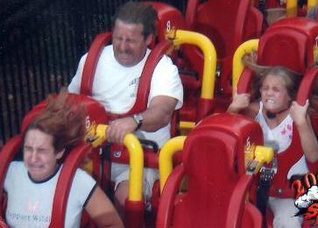 You only feel the acceleration downward. In roller-coaster this sensation is maximized for maximum thrill. A stall isn't instant: some parts of the wing can be stalled while the rest still provides proper lift. Once the airplane is near or at terminal velocity in a stall it will feel no different from regular straight and level flight.

The onset of the stall was paired with some turbulence which would mask the downward acceleration.

Pilots are also trained to ignore their own sensations because they can be misleading leading to spatial disorientation. You can be in a spiraling dive and still feel as if you are flying straight and level.

You only feel the plunging sensation during the initial downward acceleration. Once stabilized at a constant rate of descent, things feel normal again. The other thing is, the amount of vertical acceleration from a stall type maneuver does not result in 0 or negative G, just less than 1. You'll feel getting light in the seat, you won't lift right out and if you are being assaulted by several stimuli at once, as this crew was, you won't even notice it.

You can easily make an airplane go 0 G or negative by getting some speed and pushing hard. It's called a "bunt". I can make a pencil float in front of my face for about 3-5 seconds in my airplane (push a little bit too hard, and all the crap on the floor ends up on my canopy) If you are able to nail the 0G point precisely, it's exactly the same sensation as being in a space craft, although short lived. A jet going 300 kt can keep it up for 30 sec, which is how they train astronauts for weightlessness.

You are forgetting one large difference between an aircraft moving through the air (still generating some lift), and an object in free-fall. Constant velocity in a gravity well (such as on the Earth) will cause you to still experience the acceleration due to gravity. It's when you're accelerating that you feel different.

Think of it this way - imagine driving over a hill in a car with cruise control. It's only as you're cresting the hill do you feel "weightless", because you are accelerating downward. On the way down the hill (assuming cruise control maintains speed downhill in this car), you will experience gravity normally.

Sensation of motion can come through three of the physical senses. Each of the three senses is successively unavailable as we move through the examples of an amusement park ride, the plummeting elevator, and AF447.

This sense is fairly well understood, so I'll limit this bullet point to pointing out that the visual sense is correlated in the human brain to the vestibular sense. In the amusement park ride, the inputs recieved from the vestibular sense and vision match, and there is no resulting confusion about the perceived motion. In cases where those two senses are decoupled, it is common for nausea to result. In the elevator and airplane in instrument conditions, a visual sense grounding you to a world reference frame is denied. This is one of the senses which can detect unaccelerated motion, more on "unaccelerated" below.

Here we have information which comes in through our sense of touch, primarily through nerve endings in the skin. The roller coaster comes through here again by exposing you to the elements giving you a "rush of wind" in your face as you move through what may be a stationary mass of air. In the closed environments of the elevator and cockpit, this is again denied.

Here is where things get interesting. For the purposes of this discussion, I'll add to the vestibular senses the "seat of the pants", "pit of the stomach" and other bodily means of detecting acceleration. Several other answers have pointed out that all of these senses are sensitive not to velocity but to acceleration, which high school physics reminds us is the the time rate of change, or derivative, of velocity. This means that if velocity is not changing we are not going to have a sensation of motion, although in a gravity field, we may have some sense of orientation (you can have a sense of hanging upside down or laying sideways). There is no difference to these senses between sitting on the ground with the engines running, cruising at 500 knots in level flight, or being in a 500,1000, or 3000 foot per minute descent. As long as velocity is not changing, these senses cannot tell the difference. This is the problem with AF447, No visual, no touch, and in unaccelerated descent, no vestibular sense.

There is another problem, even with detecting acceleration. The problem is connected to the human brain's remarkable ability to filter out stimuli. A normal human brain is capable of adjusting to the tint of your sunglasses, ignoring conversations in a crowded room, and is very good at not notifying the conscious thought center of the pressure your elastic socks are putting on your ankles. Indeed, it can even lose track of constant accelerations. If you live near a playa, you can do a blind test by driving your car out and enter a gentle turn giving a tenth of a "g" of lateral acceleration. Have someone else do the driving. I am here to tell you that the resulting sensation can be filtered out. Even our sense of acceleration can be lost under constant acceleration. In physics, there is yet another level of derivative, the time rate of change of acceleration, called "jerk", which is harder to not detect.

For more information on the brain's filtering capability, look up the "Reticular Activating System". Understanding it can help you be more safe, and also help you reach your goals.

That accident took place at night and in IMC while the aircraft was passing through a storm which I suspect had quite a bit of turbulence in its core. This would most likely have caused enough vestibular disturbance for the crew to make the acceleration towards the deck go unnoticeable.

Secondly the crew was on an IFR flight which means flying by instruments in conditions and specifically trained to rely on cockpit instruments for aircraft orientation and not vestibular senses. Doing otherwise will get you killed in any other situation. Once the aircraft reached its peak descent rate in dark night over water and with the air data sensors iced over, preventing the flight control computers from receiving accurate air data, there was no perceptible means for the crew to sense they were in danger until it was all over.

Pilots do experience the vestibular sense of accelerating as occupants in a carnival ride do - try flying aerobatics some time and yes, it’s quite noticeable when pulling negative Gs, etc. it’s just not a good standard to use to judge movement in an airplane by and without visual references outside of the aircraft it is difficult and very dangerous to use vestibular senses to accurately assess aircraft attitude from.

Not the answer you're looking for? Browse other questions tagged medical aircraft-physics g-forces human-factors af447-accident or ask your own question.

22
Why are Airbus captain control sticks placed on the left when most people are right-handed?
9
Does hypoxia affect pilots differently from people on the ground?
8
What causes the phenomenon that pilots don't believe their instruments, while they're working well?
2
Can pilots wear glasses/corrective lenses inside the cockpit?
6
Why does elevator still raise and lower the nose when the aircraft is steeply banked?