Why can't an airplane stall at zero G?

You may be surprised to find out that an airplane can stall at any attitude if the critical angle of attack is exceeded, but it cannot stall at 0 G.

This quote found in the April 2014 issue of Flying magazine, but it seems counterintuitive to me.

Why can't an airplane stall at 0G?

At 0 G the plane does not need to generate any lift, therefore there is no critical angle past which the airfoil cannot generate the lift required.

In addition, a sustained 0 G maneuver is a parabolic arc, which means that in theory your flight path should keep your angle of attack at zero the entire time (in a theoretical, symmetrical airfoiled aicraft). You can't stall because your AoA is constantly 0 degrees and cannot exceed the critical angle.

It's probably more accurate to say "you cannot maintain 0 G in a stall". Even a stalled airfoil generates some lift -- the stall just means that the lift coefficient drops below the best the airfoil can do, not that it becomes zero. Since the stalled wing produces lift, and this lift is generally not in a direction where it can be canceled out by thrust, it will pull the aircraft away from the freefall trajectory.

And even that isn't completely true in the theoretical extreme. If we imagine an aircraft with fully variable angle of incidence (never mind the engineering problems in building such a thing), we can imagine rotating the wings up to around 90° angle of attack. Then, by symmetry, they will not produce any lift, yet it will be fully stalled. There will be lots and lots of drag, but sufficiently powerful thrust can offset that and make the net motion of the aircraft follow a zero G / freefall trajectory.

Look at it backwards.

And that's why you can't stall at zero G. You're always also at zero degrees angle of attack (you can get pedantic, depending how you measure it) when you're at zero G. And stalling is always caused by high angles of attack. And if that doesn't make 100% sense, you should look more into stalls before you dig too deep into how G loading affects stall speed.

EDIT: Many people here seem to be replacing the world "airplane" in the question with the word "wing". 0g flight involves the entire airplane, not just the wing. Sure, you could take a Cessna, strap highly controllable rocket engines to the top of it and drop it from another airplane. Then, use the rocket engines to counteract drag and give downward acceleration equal to the force of gravity. That would give you a stalled wing and 0g.

But that's not really an airplane anymore, and it doesn't really answer the question.

The point isn't that once an airplane is at 0g it becomes unstallable. The point is you have to leave 0g to stall it.

It's also an example of how airspeed is irrelevant to stalling. (Sounds crazy, since we talk about stalling speed!) Stalling isn't about the speed or amount of air flowing over the wings, it's about the angle, path and flow. A wing on the same airplane can be not stalled at 5mph, or stalled at 100mph. It just depends on the angle. 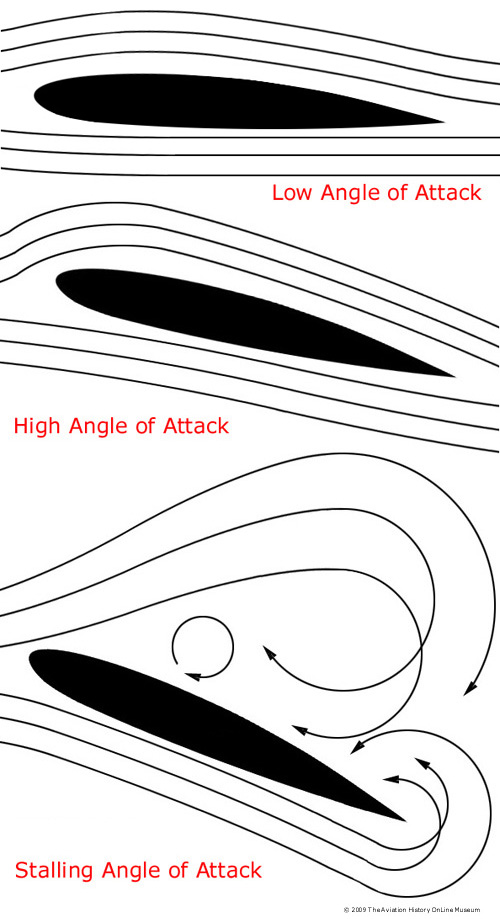 Now, I think the article is somehow misleading. I think what they mean by stall is the airplane lift not being able to compensate weight. Since the weight in 0G is 0, then obviously it won't "stall" in this definition.

A harder question is whether the airfoil can stall in 0G according to the actual definition. Well, if the airplane is free falling in a straight line with its wings parallel to the ground, the airfoil is stalling, but in reality it will likely enter spiral dive, the airfoil will produce lift (which produces the centripetal force of the spiral) and won't be 0G anymore. An airplane is so that it will naturally adapt to the relative air stream, so it's hard to maintain 0G. You do this following a ballistic trajectory, on which at the top portion of the trajectory you get a short free fall feeling, where the airfoil is not producing lift (zero angle of attack).

Aircraft is flying in the air by 1 G force that resist the gravity of earth and keep the aircraft stay airborne. So if we lose this lifting force that is generated by the differential pressure between the upper and lower side of the wings, in this case the weight force, it will overcomes the lift and will pull that weight of aircraft to the downward.

So the zero G means the weight will be a little bit more than of lift, And eventually the zero G will account as weightlessness but it will be moving toward the centre of gravity (the earth). Why? because we are still flying at the atmosphere environments.

Not the answer you're looking for? Browse other questions tagged aerodynamics stall g-forces or ask your own question.

1
Why do zero gravity flights not stall?
11
Is the stall speed different at -1G?

8
Why is stall speed listed in a POH?
12
How can we recover from a tailplane stall?
6
How will a prolonged series of steep turns produce a stall in subsequent level flight?
7
Why do aircraft stall warning systems use angle-of-attack vanes rather than detecting airflow separation directly?
1
What are the margins used to avoid a stall while slipping near the ground?
3
Would the front rudder of the Wright brothers really have helped in recovering the glider from a stall?
1
How to find the static stall angle of attack for a given airfoil at given Re?
4
Effect of touchdown on angle of attack, tailwheel vs tricycle
2
What's the relationship between AOA and airspeed?