Why does MH370 Satellite data disagree with track after take off? [duplicate]

Can someone please explain the inconsistency in MH370's alleged track after take off? 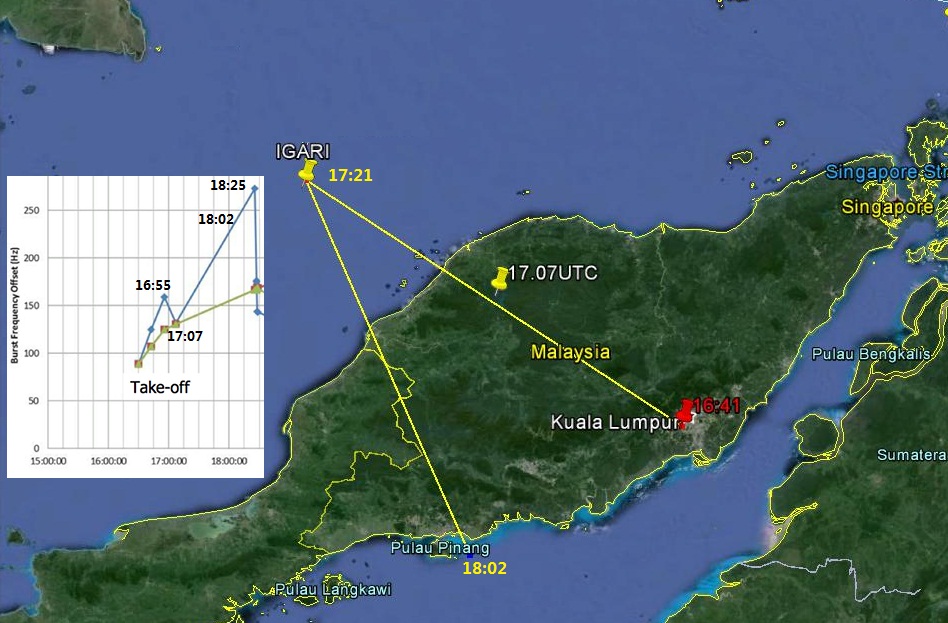 The satellite handshake offset frequency shows an increase after take off until 16:55 UTC, then a reduction in frequency until 17:07 UTC.

A frequency increase means signal compression, in other words flying west towards INMARSAT.

The problem is after take off at 16:41 UTC MH370 was tracked by radar flying steadily east until reaching BITOD (east of IGARI) when tracking ceased at about the radar horizon. MH370 was never spotted on radar east of the Malay peninsula flying back.

In the preliminary accident report released on May 1st by the Malaysian Government it is shown flying back to Penang. Radar tracking imagery from Butterworth shown to relatives at Beijing on 21 March shows a target flying from Penang at 18:02 UTC across VAMPI and reaching MEKAR at 18:22 UTC.

My question is why the satellite handshake data does not match the claimed track?

The frequency increase implies MH370 flew west after 17:07 UTC, but the radar/transponder data says it continued east until at least 17:24 UTC.

The satellite movement from take-off until 19:41 UTC was northward from the horizon and INMARSAT's displacement does not seem sufficient to cause the inconsistency.

Browse other questions tagged mh370-incident or ask your own question.

38
How can a computer model yield two possible flight paths of MH370 in South Indian Ocean?
1
How could MH370 fly west when satellite pings went east?