What is a good plane for aerial photography?

I'm a bit of a photographer and I keep thinking it would be fun to try and do some shots aloft. Only trick is, I'm not sure what kind of plane I would want to use to get those pictures done. I'd have to rent the plane and the pilot and I'd like to keep the price down as best as possible... So a purpose built plane isn't such a big deal.

Also, a high wing is probably preferred. Though, if it's exceptionally good at holding a bank, it may not matter.

If you think of anything else that I should consider to keep my camera from being jangled about, and to allow me to have a good view so I can get some shots... Please feel free to leave them in the comments.

So, what plane would work best for this mission?

I used to work at a sport parachuting center - we occasionally had photographers rent one of our Cessna 182 airplanes for the same purpose. An advantage of jump planes is the pilots are quite used to odd attitudes (and even odder requests) so a 60 degree bank angle with the door open and you leaning out of it will get a reply of "no problem".

Our conditions were the photographer wears a parachute, a seatbelt, and if the camera goes for a jump that's just too bad for your wallet. 30 minute lecture on what to do if you fall out. Short form: drop camera, grab this handle, pull. And the trip's over if you do anything silly.

You would sit on the floor where the co-pilot's seat would normally be, the pilot will open the door as needed, and you have a clear view out the right rear quarter of the plane. Obstacles are the wheel (front half of the door looking down) and wing strut (forward) - the tail is well out of the way. It's very noisy, but unless your camera is actually outside the fuselage the wind blast is not an issue. Don't change lenses though, and your clip-on lens hood will probably disappear rather quickly.

You can sit on the door ledge with your feet outside and have an excellent, stable field of view with both hands free to operate your camera. I've sat there hundreds of times without a seatbelt, it's no problem even in steep turns. Just a bit odd seeing the ground above the wingtip. Difference is, I don't care if I fall out.

Well, the first caveat is that the best plane for aerial photography is one that someone else is flying -- Trying to set up shots while also maneuvering an aircraft is difficult at best, and can be dangerous.

In the typical GA airplane fleet I would pick a Cessna 152 or Cessna 172. These planes are pretty much ubiquitous, and among their advantages are the large hinged windows which you can flip up and pop a camera out of.
You might also consider "jump planes" which are certificated for flight with a door open or removed, providing you a giant hole in the fuselage through which you can take photos (as well as anchor points to attach yourself and your equipment to the airframe).

If you will need to hold station over your target a R22 or similar helicopter would probably be your best choice (and the R22 can certainly be flown without doors).

At a bare minimum you should be wearing a substantial wrist strap. Anchoring yourself and your equipment to the airframe is also an excellent idea, as having expensive camera gear fall out of an aircraft can be quite unpleasant (both for you - as the gear will likely be destroyed - and for people on the ground who get clobbered by it).

Chris Dahle-Bredine (author of Shot From Above) uses an ultralight for this kind of photography.

It's cheap, only burns a little gas, is cheap to maintain, has lots of visibility, and he takes amazing shots! 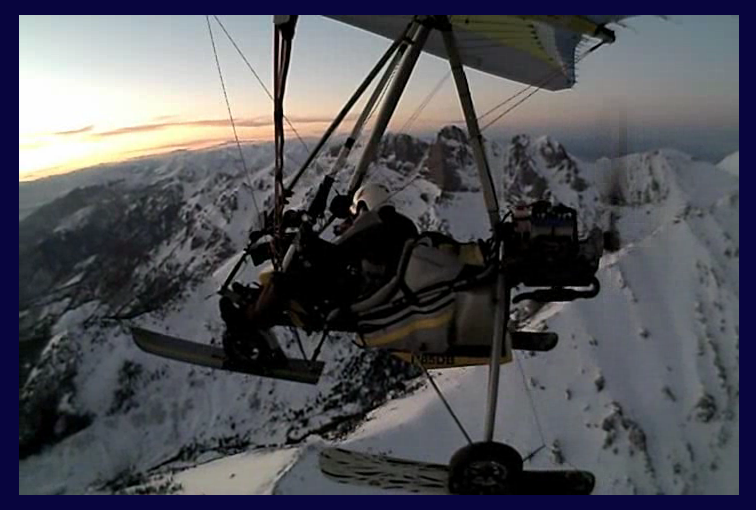 I'm going to try to offer an out-of-the-box solution and suggest a remote-controlled quadcopter / octocopter UAV with a camera mounted on it. Such a system seems to satisfy most of your stated and implied needs:

I'd have to rent the plane and the pilot and I'd like to keep the price down as best as possible.

A UAV seems like an excellent choice in this regard: unmanned vehicles tend to be cheaper than manned ones, and don't require a pilot's license to operate (although other regulations may still apply).

You probably do still need a skilled operator, since controlling a quadcopter does take some practice, and it's difficult (not to mention potentially dangerous) to control the vehicle and the camera at the same time. Having a separate pilot frees you from having to do that job yourself, and lets you concentrate fully on taking pictures. The commercial operators I know of that do this kind of work always have a separate pilot and camera operator.

Check. The setups I've seen usually have the camera mounted under the vehicle body, so you can point it in any direction, including straight down, and the only things that could possibly get in the way are the landing struts.

Check, sort of. No, the quadcopter itself can't maintain a steady tilt without accelerating, but the rigs I've seen let the camera be held steady at any angle, while the copter can freely move in any direction in three dimensions.

Check. At least, I've never heard of this being a problem.

This is the one aspect in which remote-controlled helicopters absolutely excel: they can hover in place, or move at any desired speed (for panning shots), at any altitude above ground level. Want to hover in front of someone's face to shoot a portrait of them? Perfectly possible (if maybe a little bit unnerving).

Mind you, I haven't actually flown or worked with such systems myself; most of my knowledge comes from watching a demonstration at a "maker faire"-style event by a local company operating such systems, and exchanging a few words with the folks there. But it was definitely impressive, and the way I would go if I ever needed to do some aerial photography.

That said, there certainly are also some photography applications for which remote-controlled vehicles are not so well suited, such as high altitudes, very long flight times, flight over significant distances of inaccessible terrain or operation in bad weather. However, if your requirements don't include any of those, they may well be much more practical and less costly than renting a manned aircraft.

Well, the absolute cheapest and easiest way for aerial video is with a homemade garbage bag kite. Don't laugh, sometimes you can get great results. And you can easily change the viewpoint angle by simply reeling the kite in, adjusting the camera to a different view angle, and reeling it back out. You can also fly all day as long as you got wind. Here's how. http://quadcopter101.blogspot.com/2014/04/do-you-wish-to-do-aerial-video-but-only.html

But another cheap and easy way is with a toy quadcopter. And again you can get surprisingly good results with even the cheapest (about $65) quadcopters. Again, here's how: http://quadcopter101.blogspot.com/2014/02/misc-4-aerial-video-part-2.html

How about the AirCam? It was pretty much designed for the type of aerial photography you describe - low and slow with great visibility.

Not the answer you're looking for? Browse other questions tagged general-aviation aircraft-operations or ask your own question.

1
How can I take 360° panoramic pictures in an aircraft or helicopter?

31
What is the proper procedure after a bird strike in a single engine plane during takeoff?
12
Is there a good source for estimating the per unit cost breakdown for a classic GA plane like the Cessna 172?
4
What kind of certifications are required for a plane manufactured for personal use?
27
What time zone is used for operating an airplane?
20
What plane is this?
1
Is there a good reason to have a handheld Aviation Microphone in GA?
3
As a commercial pilot, can I fly my spouse for her work?
4
What are the EASA external aircraft lighting requirements for day/night/VFR/IFR operations?
13
What options are there in Canada for treatment of severe depression and anxiety for pilots?