Why does my flightplan generator come up with a very non-direct route between these two airports?

I'm currently obtaining my private pilot license and I had a random thought pass through my head so I wanted to see how long it would take to get from my airport (KGBR) to an airport in VA (KCHO). The flight plan provided is not as I expected which I assume its due to the busy airspace surrounding my flight. I was wondering why the flight path generator didn't give me a more direct route heading west and then south instead of bringing me down the coastline. Any insight would be appreciated! 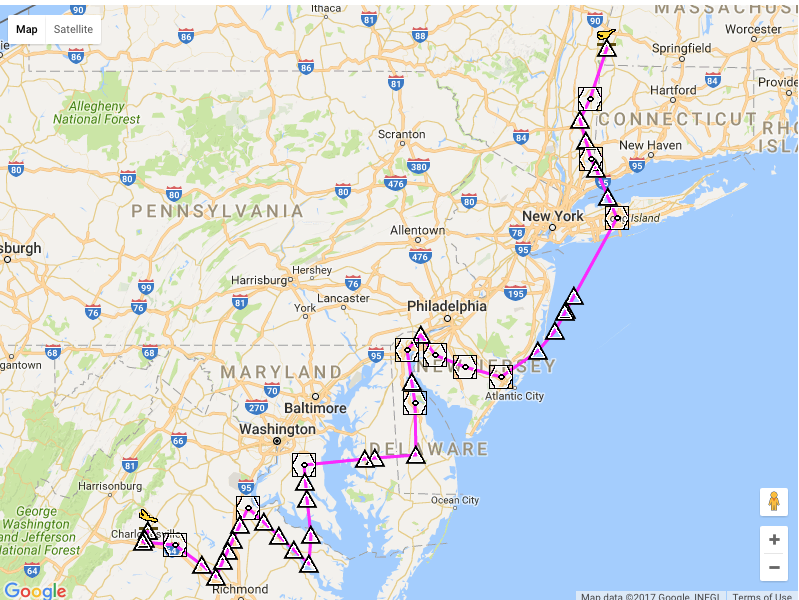 I assume you used some kind of "use airways" option to vector you on an airway flight and generate this path. First and foremost a quick note, this path, for a small single engine trainer is outright dangerous and you should not fly over that much open water when you can easily avoid it.

Its more than likely that the algorithm that generated this is not the best one. For a quick comparison if we throw this into foreflight and have it select an airway path we come up with the following path. 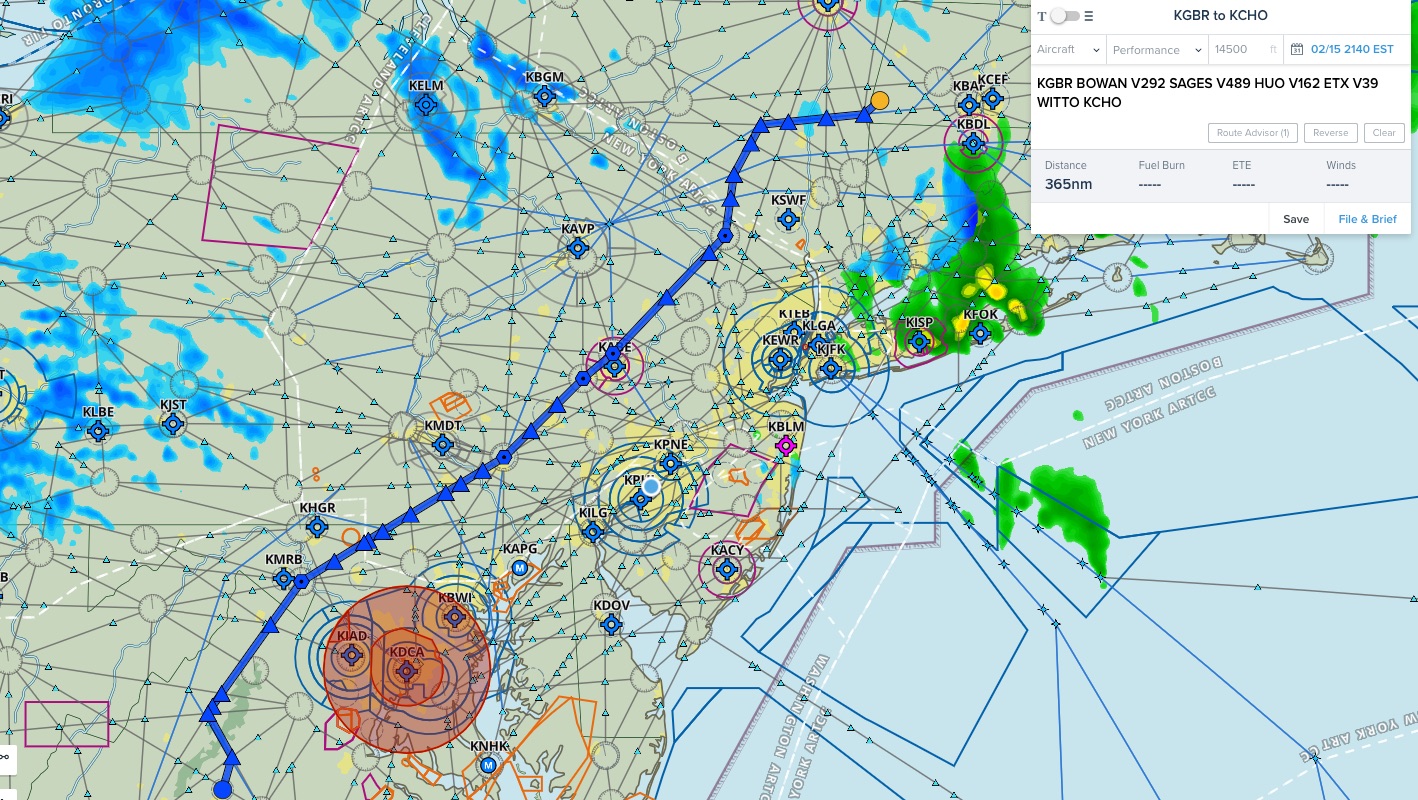 It looks like in some way your software went east first then hit some of the restricted airspace southeast of DC, got confused, did some crazy routing around it. This put you out in the Maryland/Delaware area then took you north again. A turn east to avoid the Philly Bravo, then north again along the coast but staying out far enough to avoid the NYC Bravo. A strange path indeed and it looks as if you may have set it to avoid Bravo airspaces if possible. If you simply set it to generate an airway course from point A to point B then this routing is just the result of poor computing, in my opinion.

I assume its due to the busy airspace surrounding my flight.

I don't know what flight planner you used (you may want to let us know) but with a PPL you are more than allowed to fly right through all airspaces (Class A even, if you have an instrument rating and your plane can make it up there). The planners I use have never routed me due to "busy" airspace. The only airspace on your route that would be of concern is the DC SFRA which requires a quick online course prior to your flight I order to be allowed to enter.

On any note, if you are going VFR, you can fly direct, weather and airspace clearance permitting. For example, you only need to avoid the TFR over DC right now. You could fly the following course and only ever need a clearance through the Allentown Class C and the DC Bravo. 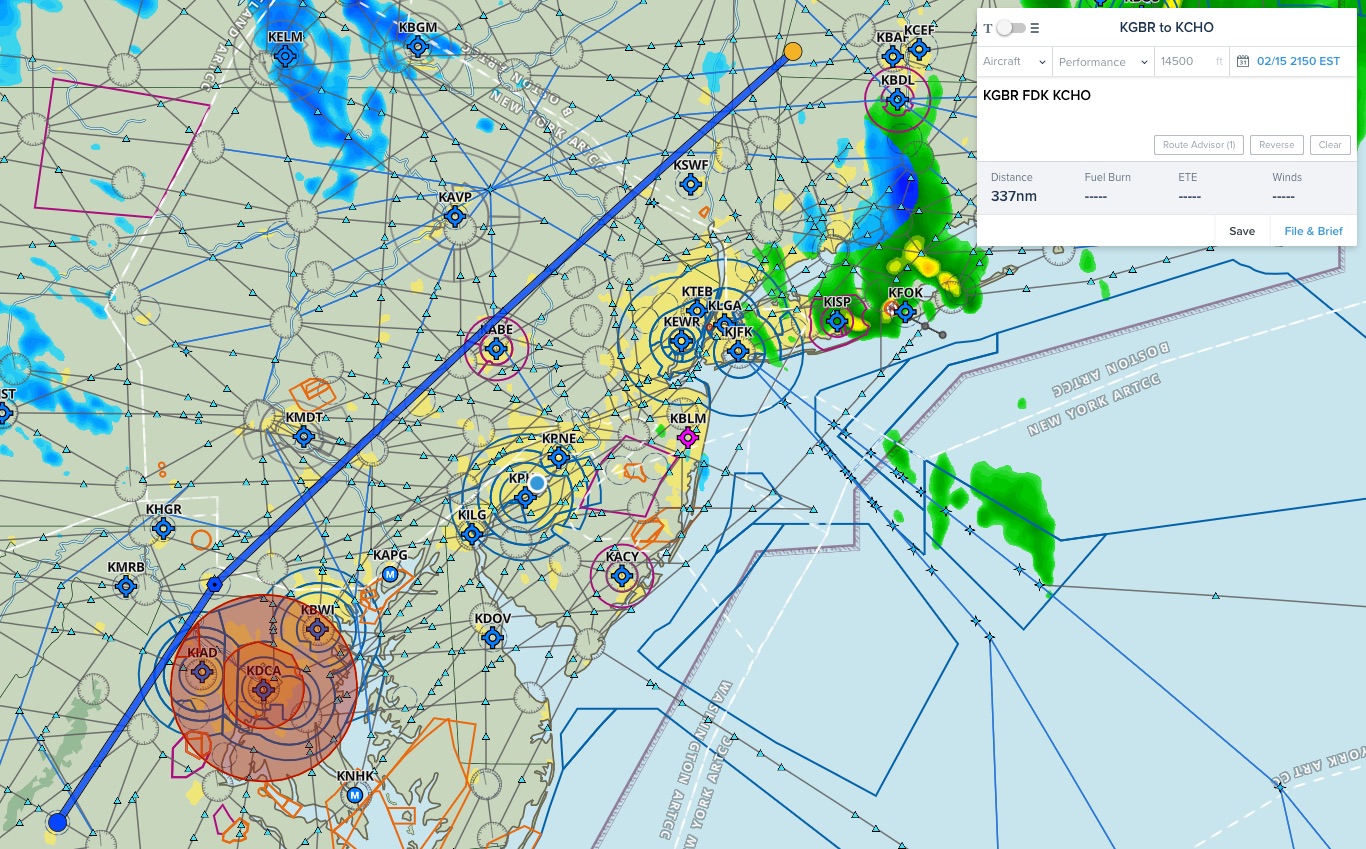 Side Note: I fly out of KPNE or DYL in the Philly area, I never have an issue getting a clearance right through the Philly Bravo VFR when I request it.

I also see in your comments that you are flying this in a Cherokee 140. Im a bit curious about the 5000 ft. ceiling you list. Is this a limit on your airframe? That plane has a quoted celling of just over 10K. I did my training in Archers and Warriors and have taken them VFR up to 7500 ft. with out issue and plenty of power left to climb. On any note, the highest minimum obstacle avoidance altitude I see on the route is down by the LDN VOR coming in at 4400 ft.