What is the process to disconnect ground electric power before pushback?

While commercial airliner are parked at the gate, they have electrical power connected to the aircraft (if available at the airport). This needs to be disconnected before pushback - what is the process to do so?

When is the GPU disconnected?

Airports rules are applicable, for example airports may prevent the use of APU when the aircraft is at its stand (to reduce noise and pollutants release). The airline operating procedures also provide directives regarding when to start APU and engines.

The general principle is that GPU energy is cheaper than APU energy, hence unless an engine is running, GPU is used until pushback starts.

When the crew is ready for the pushback they make sure they have the APU running and the GPU isolated from the electrical bus. 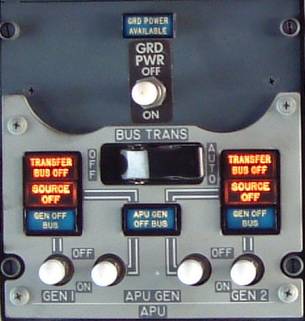 On the ground power receptacle panel there are usually lights to indicate whether the GPU is connected and in use. 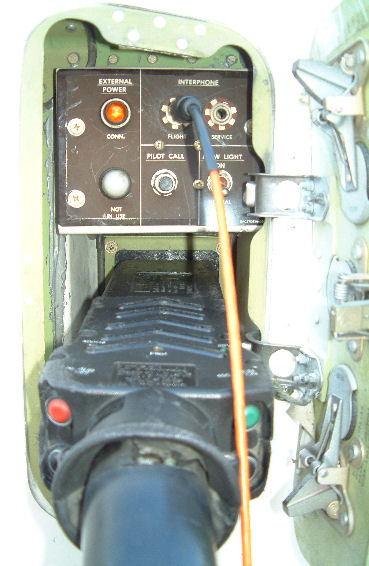 The operator checks the white light is on, which indicates the GPU is not in use and using a switch on the plug electrically disconnects the ground supply. The "CONNCT" light goes off and the cable is physically disconnected. At this time the GPU may be shut down, if applicable.

Chocks are removed, brakes are released and pushback can start.

Currents required for 90 kVA under 115 V are about 1 kA. If the connection is broken when such current flows, the components just disconnected can melt down, and liquid metal can be projected around (it's similar to arc welding).

GPU are fitted with some protections to prevent hot disconnection. Let's look at this aspect.

A GPU delivers three-phase 115 V / 400 Hz, the GPU cable/plug contains therefore 4 main conductors and pins: one neutral used as common ground (N or G) and three phases (A, B, C). When the system is balanced, there is no current in the neutral, electrons move in phases only due to the voltage 120° phase angle difference.

N, A, B, C wires are connected to corresponding pins of the plug (E/F pins are explained below): 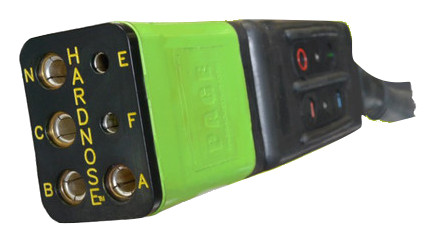 At 400 Hz the reactance of the GPU cable is 8 times the reactance at 50 Hz, and is able to alter the phase angles at the aircraft interface, leading to significant power losses and under-voltage. Inductive reactance is due to the existence of a strong magnetic field near the conductors. This field can be cancelled by distributing the phase conductors around the neutral.

As the phase conductors have a large diameter, doing so leaves some empty space between the conductors. This means conductors may move within the cable when the cable is used. One solution to minimize this space is to split each phase conductor into two separate smaller conductors connected to the same power connector pin: 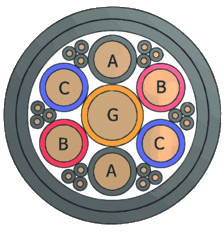 In addition an adequate mechanism can be used to tweak the reactance and/or the voltage when the cable is moved and its curvature is altered and/or when the electrical demand varies. This can be done by injecting some capacitive reactance into the circuit and/or adjusting the transformation ratio.

Two smaller pins (E and F) of the cable plug are used for status exchange between the aircraft electrical system and the GPU. F carries 28 VDC from the aircraft. E and F are usually shunted in the GPU plug.

This way, when the plug is disconnected, the aircraft electrical system can inhibit its ground power input and the GPU can shutdown its power generators.

E/F are connected to corresponding smaller control wires visible between the phase conductors (when E and F are shunted, a single wire is needed).

Control wires can be used to connect optional systems to the GPU:

Conversely, LEDs on the plug can be switched on or off by the GPU using the control wires.

Not the answer you're looking for? Browse other questions tagged ground-operations commercial-operations electrical-system pushback or ask your own question.

8
How does the 3 pin ground power connector (AN2551) work?
14
What's the plug used on airliners for ground power?

9
Who is responsible for avoiding collisions on the ground; the pilot or the air traffic controller?
26
What item is a pushback operator holding up after pushback?
4
Is the Auxiliary Power Unit used after landing when ground power is available?
6
Are parked airliners always connected to a ground power unit?
39
What are the advantages of towbarless pushback tugs?
12
Why must some aircraft get permission to start their engines?
16
What is an "all-electric APU"?
8
How does the 3 pin ground power connector (AN2551) work?
2
What is the minimum number of people required to manually pushback a 747?
19
Can a completely drained battery be recharged via ground power on an airliner like the B737?