How can I calculate the force on the nose gear at landing?

How can I calculate the force applied on nose gear during landing as nose gear touches the runway little after the landing gear? I understand force calculations in this question but I think it applies on main gear. How is the force on the nose gear calculated?

Calculating the loads on the nose and main landing gear isn't really different. The answer you linked is a highly simplified approach you should be able to use for the nose landing gear too, but I will provide a "less simplified" approach to calculate the vertical forces. The braking force is already greatly described there.

First you need to know the impact speed and the spring and damping characteristic of your landing gear.

At touch down there are three possible cases:

The stiffness ($k$) and damping characteristic ($c$) of the landing gear depend mainly on the suspension and the tires used. Tires inflated with a wrong pressure can be really dangerous as they can increase the load on the landing gear. 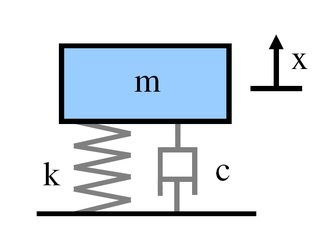 To calculate the force on the nose landing gear you just have tofind the maximum acceleration and add the static and dynamic loads: $$F_{max}=-m\cdot g -m\cdot \ddot{x}_{max}$$

While the calculations above works for really stiff wings, in reality the loads on the landing gear will be (probably) higher. This is due to the inertial forces of the oscillating aircraft structure.

If you don't understand where this forces come from try moving your arms up and down while standing: you will feel small forces on your feet. Now repeat the experiment with two 60t heavy wings as in the A380 and you'll see that the forces are not neglectable. And were do the oscillations come from? The same as with a guitar string: after a small excitation (plucking the strings/ landing impact) the structure (guitar string/ aircraft wings) begins to oscillate.

In order to calculate the force, you should start with an estimation of the angular momentum as the nose sinks and the wheel contacts the ground. That angular momentum am becomes zero as soon as the oleo leg is compressed to its maximum stroke, but that takes a measurable time, from first contact of the front wheel with the ground till the extreme compression of the oleo leg. If you assume that the force f on the oleo leg is constant along the compression stroke, and know the time t it takes, then:

Of course, it's only a rough estimate, but better than nothing...

In order to calculate am, you'll need to know the mass of the plane, its moment of inertia when turning on the main wheels, and the angular velocity of that movement.

26
How much force does a 747 land with?
12
Could a pick up truck save a plane with failed landing gear?