Why is the nose landing gear of a Rutan Vari Eze up during parking?

I recently saw a Rutan Vari Eze parked at the airport and I was wondering why the nose landing was up during parking. How does it work for a pilot to get in? Can the pilot put down the landing gear while sitting in the cockpit or has the pilot to put it down while standing outside? And what's the idea behind such a construction, why isn't there just a normal landing gear? 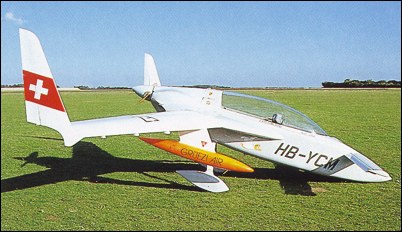 Rutan Vari Eze during parking, with the nose gear up 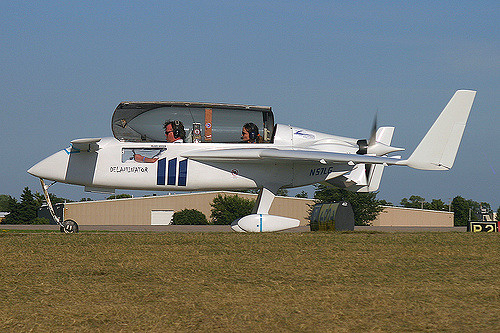 Rutan Vari Eze before takeoff, with the nose gear down

For getting in, the nose has to be physically raised before the pilot can board the aircraft:

When the aircraft is parked, the NLG is retracted and the aircraft rests on the bumper at the front of the aircraft, in what is described as the 'kneeled' position.

Extension of the NLG requires the front of the aircraft to be physically raised, after which the NLG extension system is operated from the cockpit.

To begin the NLG extension, a handle in the cockpit is turned in he extend direction. This handle is connected to a shaft that turns a worm gear and crown wheel, and the rotation of the crown wheel drives the actuating rms of the NLG in the down direction. When the NLG is extended, an extra 1.5 turns of the handle causes the crown wheel to drive the actuating arms over-centre, which locks the gear in the fully down position.

After this, the pilot boards the aircraft. On some aircraft, linear actuators seems to have been fitted for this purpose:

In recent years the application of general purpose, 12 volt, linear actuators came into use for electrical actuation of the nose gear with the airplane loaded.

With the linear actuator the airplane can be parked nose down for stability, boarded (in the nose down position) and raised by the push of a button.

As noted above, this design has been adopted for stability- As the engine is on the rear, if the pilot is not in the aircraft, it can tip backwards, damaging the propeller. This also acts as a parking brake.

From the Wikipedia article:

In place of a parking brake, the plane's nosewheel retracts until the nose rests on the ground. Resting the nose on the ground also moves the plane's center of gravity forward relative to the main landing gear, which prevents the plane from tipping onto its rear when there is nobody in the pilot's seat to weigh the nose down.

It's not at all unsurprising that this is a Rutan aircraft; certainly it could have been designed with a different layout and more conventional landing gear, but Rutan seems to design things differently simply because he can. It might be impractical, but it's a lot more fun!

Not the answer you're looking for? Browse other questions tagged landing-gear single-engine .

3
Are there pilot weight limits for the Rutan Vari Eze?

8
How many miles before the runway should an airliner put the gear down?
10
Why is the main landing gear of the Cessna Caravan placed so far forward?
38
Why don't modern aircraft have landing gear that can swivel to compensate for crosswinds?
50
Why does the landing gear control have 3 positions (up/down/off) on Boeing 737-800?
20
Is it better to shut down the engine(s) or leave it (them) running when a gear up landing is imminent?
9
Is there no warning if landing gear is not retracted during flight?
8
Should an emergency field landing be performed with landing gear down or up?
9
What is dual mode adaptive landing gear system?
3
Why is the landing gear lever not set to OFF on the ground?