In most POHs, the flap configuration for short-field is usually recommended as partial flaps, for instance 10˚ for C172.

I remember the arguments are that full flaps would reduce the acceleration rate, and in no flaps the airplane would have to accelerate to higher speed to off the ground. In either case, the ground roll distance is longer than the optimal partial-flap configurations.

However, this assumes a fixed flap setting during ground roll. How about let the airplane accelerate to a certain speed (in zero flaps) before adding to full flaps? We could achieve best acceleration as well as best lift-off speed?

I found this answer is a good analysis.

"Another possible procedure (which is usually not recommended) is to keep the flaps retracted until you are ready to leave the runway. Less flaps means less incidence. A big disadvantage is that “popping” the flaps like this increases your workload at a time when there are lots of other things you should be attending to. Another disadvantage is that you run the risk of extending the flaps past the takeoff position to the landing position, creating lots of drag, which is really not what you want in this situation. If your POH calls for this procedure, go ahead, but be careful. Make sure you have some sort of detent to block inadvertent over-extension."

Flaps have the dual function of increasing lift and drag. When they are fully extended, the drag greatly outweighs the extra lift. So whilst you might have a slightly shortened takeoff run (though I doubt that there is a significant reduction in a C172), you could very well struggle to clear any obstacles. And not forgetting that the takeoff distance required is defined as the distance to climb to 50ft, climbing out on full flaps could actually increase this distance.

You might be tempted to say you should extend the flaps just in time to rotate, then retract them immediately once airborne. Retracting flaps at such a low speed and altitude is incredibly risky. Plus this is a lot of extra work for the pilot at an already critical phase of flight.

In most aircraft, using the smaller flap setting provides extra lift with only a bit of the drag. Always follow the POH - it's written by the folks who know the aircraft and its performance better than anyone.

Yes. But only partial flaps will help; full flaps are almost always a poor choice for takeoff.

What you describe was the standard operating procedure for the Messerschmitt Me-262s in the JV 44. Due to the low thrust at low speed it had a very long takeoff run, and to operate from short airfields designed for propeller aircraft and hastily repaired after attacks it needed to employ this technique. Note on the picture below the small deflection angle, however: This only worked well when the takeoff run was made with zero flaps and then takeoff flaps (not full flaps!) were added shortly before rotation.

The downside was the risk of an overshoot in case the flaps failed to deploy. If your airfield is long enough, it is certainly safer to set the flaps at the beginning of the takeoff run. 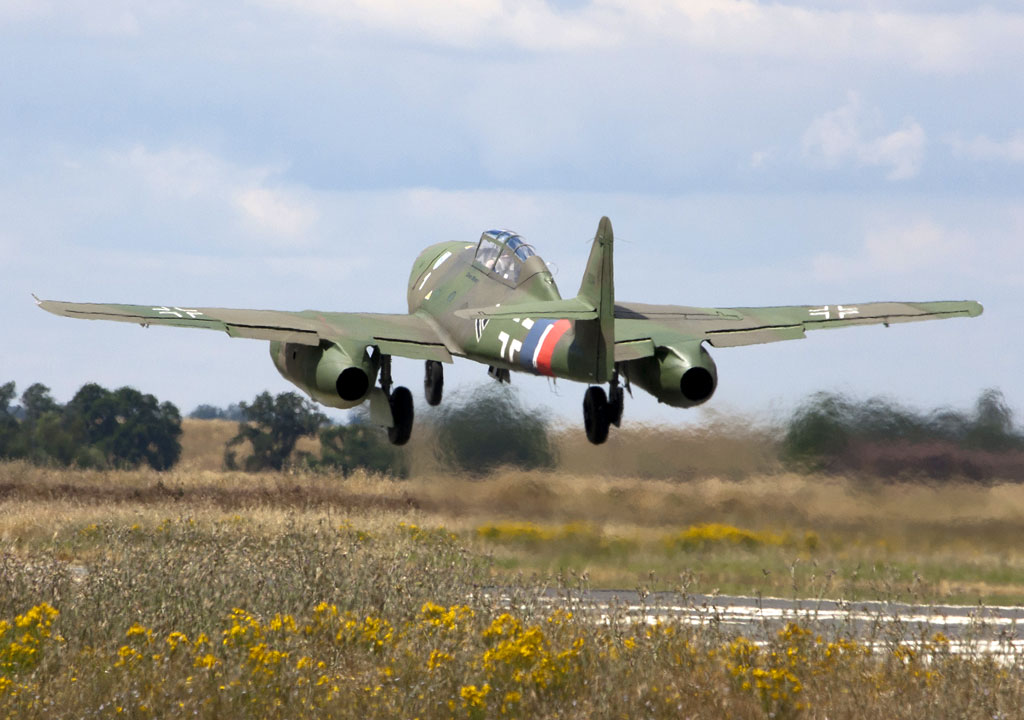 Not the answer you're looking for? Browse other questions tagged aircraft-performance takeoff pilot-technique maneuver or ask your own question.

8
Does acceleration increase linearly on a takeoff roll?
11
How can I avoid floating during short-field landings?
6
Under which conditions is full rated power instead of METO power required for takeoff (DC-3/C-47 with Pratt&Whitney 1830 twin wasp engines)?
2
How to calculate normal takeoff ground roll when the POH only has Short Field Takeoff tables?
12
When does a 'flaps/slats misconfiguration' warning sound during takeoff roll?
9
What flaps position should be used for taking off from a wet runway?
13
In light aircraft, non-instrument flight, apply (nearly) full aft elevator before beginning the takeoff roll or at some predetermined speed?
0
What is the correct go-around procedure in a PA-44?
15
Why is indicated airspeed rather than ground speed used during the takeoff roll?
9
Can flaps be used to perform rotation and flare?