Why it was thought that 25% of the passengers could have survived the Crash in the Desert?

I read on Wikipedia:

The Controlled Impact Demonstration (or colloquially the Crash In the Desert) was a joint project between NASA and the Federal Aviation Administration (FAA) that intentionally crashed a remotely controlled Boeing 720 aircraft to acquire data and test new technologies to aid passenger and crew survival. The crash required more than four years of preparation by NASA Ames Research Center, Langley Research Center, Dryden Flight Research Center, the FAA, and General Electric. After numerous test runs, the plane was crashed on December 1, 1984. The test went generally according to plan, and produced a spectacular fireball that required more than an hour to extinguish.

This test was conducted to see (amongst other things) if some stuff could temper the flames after the crash. Obviously it couldn't.

FAA investigators estimated that 23–25% of the aircraft's full complement of 113 people could have survived the crash. Time from slide-out to complete smoke obscuration for the forward cabin was five seconds; for the aft cabin, it was 20 seconds. Total time to evacuate was 15 and 33 seconds respectively, accounting for the time necessary to reach and open the doors and operate the slide. Investigators labeled their estimate of the ability to escape through dense smoke as "highly speculative".

How did they arrive at 25%? Are there real-life crash landings that are comparable? There was a huge load of fuel in the plane. Was the test meant to see what happens if a plane has to return right after the start?

The landing conditions were designed to damage tanks and ignite fuel. The impact was moderate only as "rhino" horns where installed immediately after at the impact point to make an incision in the fuel tanks and engine:

23–25% doesn't tell about how many persons could have survived the crash mechanical effects, but how many could have evacuated before losing consciousness due to smoke, disregarding any impact injury/fatality.

Does that happen in actual accidents? Yes, in the British Airtours Flight 28M, 55 people died in an aircraft stopped on a taxiway with a punctured fuel tank.

Smoke and time for evacuating

When in the middle of a fire, the two deadliest hazards are not flames themselves but smoke and hot air. Smoke by itself brings deadly CO and reduces O2, but also triggers a coughing fit preventing, within a couple of minutes, further O2 extraction, leading to incapacitation.

The conclusion you mention only evaluates the number of persons able to evacuate the aircraft before losing consciousness. Related assumptions are detailed in the report, page 55: 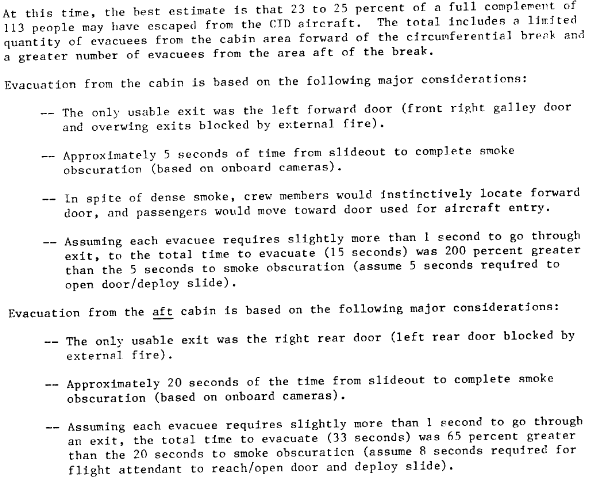 Unfortunately there has been many fatalities during actual evacuation of cabins in fire, due to smoke. In particular there was an accident a few months only after the CID, this accident did happen during the takeoff attempt, the aircraft did not even leave the runway and no damage occurred except a puncture to a tank. Still 55 persons died because of the smoke:

What do we know about the survivability aspects of aircraft accident evacuations and how did the industry learn lessons in this area?

One significant accident that contained lessons for the aviation industry and led to changes occurred in 1985 at Manchester Airport in the United Kingdom.

During take-off, at a speed of approximately 125 knots, the left engine of a B737 suffered an uncontained failure which caused a fuel leak. The leaking fuel ignited and burned directly behind the left engine. The take-off was abandoned and the aircraft exited the runway on the right hand side onto a taxiway, which resulted in the wind directing the fire towards the aft fuselage.

The airport fire service attended the accident site promptly, but within 5 and a half minutes after the aircraft came to a stop, of the 137 passenger and crew onboard, 55 persons had lost their lives.

“The major cause of the fatalities was rapid incapacitation due to the inhalation of the dense toxic/irritant smoke atmosphere within the cabin, aggravated by evacuation delays caused by a forward right door malfunction and restricted access to the exits.

Source.
More information on this accident on Wikipedia.

Incidentally this accident also tells us something important about cabin crew members role, training, and effectiveness to help people evacuate the cabin at their own risks. In the Manchester accident, cabin crews, which two members died in the accident, were awarded a Queen's Gallantry Medal along with firefighters. At the time they were officially known as "steward/ess".

A specific experiment was conducted on the seats, to compare standard seats of that time (-9g forward), and improved ones (-18g forward).

Both FAA and NASA concluded CID was a survivable accident (Summary report, page VII) and in the detailed report (on page 31) that the impact conditions were overall mild (thus preventing to fully compare seat performances).

The test objectives which involved the recording of data pertaining to the airframe structural floor loads and seat occupant responses during impact were met. However, because of the mild impact conditions, the objective to demonstrate the performance between the standard and modified seat designs was not completely satisfied.

Dummy bodies set at various locations in the flight deck and the cabin were severely shaken (as visible in this recording, starting at 1:48), but these accelerations were deemed survivable.

3
What pieces of evidence do investigators have access to in the MH17 crash investigation?
7
Have crash investigators ever used pilot cameras to help find the cause of a GA crash?
3
Could some kind of impact absorbing gels be introduced into the aircraft fuselage, to minimize impact damage on passengers & cargo?
21
How could the Helios 522 passengers have survived so long without oxygen?
8
Why did the propellers not fail to the feathered position in the Atlantic Southeast Airlines Flight 2311 Crash?
3
Which was the last Boeing crash that didn't send its black boxes back to the US?
20
Why does the autopilot disengage even when it does not receive pilot input?
3
Would shutting down the engine have prevented the Atlantic Southeast Airlines Flight 2311 crash?
10
What does Lion Air faking the repair of the AoA vane mean for the Florida repair shop that ceased operations?