Is this XKCD comic list about autogyro features accurate?

I recently came across this XKCD comic which gives you a number of facts about autogyros: 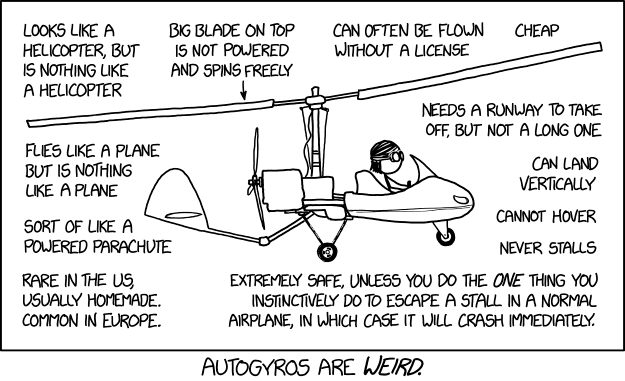 I'm not sure if this is satirical or really drawing attention to some very odd real-world facts, or a mix of the two.

Are these things all true? How do they actually work?

To a certain extent in that the controls are plane-like, you do not have helicopter controls (no cyclic, etc.), but you also do not have wing control surfaces, so in some respects like a plane, but not exactly.

Big blade on top is not powered.

True, the blades are unpowered; they rotate due to the wind. Some autogyros use power to rotate the blade to speed before take off, but the power is removed for flight.

You can put it into a stall attitude, but it self-corrects; it is basically a rotating parachute.The fatal mistake that pilots made with early autogyros was that when they entered stall conditions they instinctively pushed forward on the stick which resulted in the 'fuselage' tipping forward and the blades chopping off the tail. There have been a few fatalities this way.

Fairly good description. It is more like a powered paraglider than a helicopter or plane.

Can often be flown without a licence.

Not in anyplace I have flown in Europe. The US may be different.

The "needs a runway to take off" statement is historically true of most autogyros, but many modern ones can take off vertically. It's called a "jump takeoff."

It works by flattening the blade pitch so no lift is generated, coupling the engine to the rotor, and spinning the rotor up to a higher-than-normal RPM. Then the engine is decoupled, and at the same time the blades return to normal pitch. This uses the stored energy in the rapidly-spinning rotor to pull the autogyro upward. From there it transitions to forward flight before it has time to settle to the ground again.

Re the "Can often be flown without a license" this is true in the US for certain types of gyro - small, one-person craft which are classed as part 103 aircraft. All the more modern, useful ones that carry two people and have more powerful engines require a license.

Re the "safe unless..." piece, this is kinda true. What Randall means is that most pilots, in situations where they are concerned about possible stalls, will push the stick forwards. If you do this in a gyro, it can unweight the gyro to the point where air is no longer flowing up through the rotor, which will then slow down - quickly. If it loses sufficient momentum (and this can happen very fast), it will stop AND IT WILL NOT START AGAIN. This is because although you will be falling and air will start rushing up through it again, it doesn't happen in a way that allows the blade to start rotating correctly. So gyro pilots have to learn not to do this.

I have 600 hrs in gyros (1200 total) and when I take pilots up they always marvel at the gyro's ability to slow to zero airspeed and its incredible turning radius, but they're always nervous when I pitch up steeply - always have to explain what I'm doing first!

Not the answer you're looking for? Browse other questions tagged autogyro or ask your own question.

155
Why does XKCD say that autogyros will crash if the pilot reacts to a stall as in a normal airplane?

4
Can anyone identify this Autogyro?
0
Would this concept of Autogyro/Gyroplane be efficient or practical?