Is there a reason or code behind the Cessna model numbers?

Is there a story behind how Cessna model numbers were created?

The no theme is supported by the Apr 1981 issue of Flying Magazine, where it is confirmed by the Marketing SVP of Cessna (p.58). 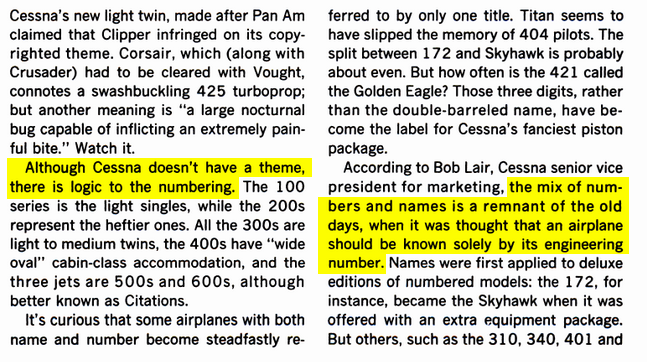 "Engineering numbers" mean internal numbers with no marketable meaning, just like the first two digits. My guess is that there were 181, 183, and 184 designs on paper at one time.

Not the answer you're looking for? Browse other questions tagged aircraft-naming or ask your own question.

2
How does the NATO code name system work, are they just random names, or is there some sort of rule(s)?
5
Does the Cessna 152 have a name?