Did the F-8 have a stall speed of 1.6x its landing speed?

Wikipedia says that the F-8 was to have

This web page says that the F-8 did have

The two don't explicitly discuss exactly the same thing, but I do note that e.g. the quoted cruise speed of 570 mph agrees on both. Unfortunately, neither page seems to specify the actual landing speed of the final aircraft.

The stall speed your source is referring to may be the speed for a clean stall which means with the flaps are in flight position (= 0°).

Flaps on powered planes usually increase lift as well as drag. This means basically that you can fly slower and stall happens at a lower speed.

Here are the speeds from the F-8D flight manual (big pdf): 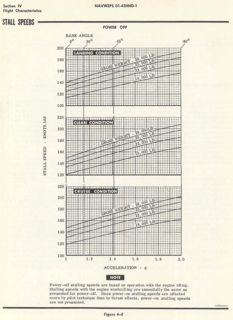 From the chart, in landing configuration with 19,000 lbs gross weight, the stall speed is ~113 knots.

does ground effect come in to play for landing scenarios? – Owen

Ground effect reduces the touch down speed by reducing the stall speed below the value mentioned in the manuals.

Regarding the points about the possibility of having landing speeds lower than the stall speed, this entirely possible. Aircraft with large flap systems combined with the use of leading edge extensions can result in very large maximum lift coefficients for an aircraft. In some cases the maximum lift coefficient (cl max) in landing configuration can be more than double that of the clean cl. This is because flaps and leading edge extensions increase the camber and in some cases the area of the wing significantly.

Here is an example of a graph showing the effect of different flap types on section lift coefficient: 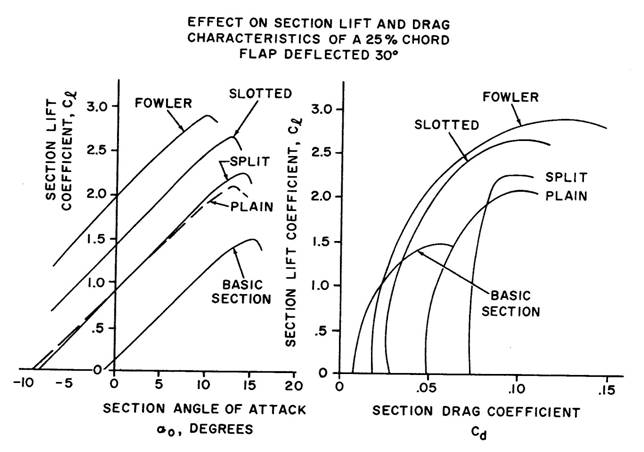 As to F-8 specifics, others have answered these questions better than I could.

Not the answer you're looking for? Browse other questions tagged aerodynamics aircraft-performance military vought-f8-crusader or ask your own question.

34
Why can't you ditch your aircraft in the sea?

10
What is the maximum theoretical lift of a plane as a function of engine power and surface of the wings?
6
Does the expression "stall speed" have a definition?
6
Does a high "wing loading" require a high approach speed or does it cause a high approach speed?
3
How does maximum speed vary with altitude?
4
Is lower wing loading safer?
3
What is physics explanation for minimum sink rate airspeed?
8
Why do propellers have less theoretical range (i.e. range ignoring impatient passengers wanting to go fast) than jets, despite greater efficiency?
16
Can the plane Celera 500L be eight times more fuel efficient than a jet of similar size and capacity?
2
What is the minimum speed at which the Antonov An-2 can maintain level flight?
6
Can a wing be stalled at a speed larger than its stall speed?