Do air-driven gyroscopic instruments suffer from icing or any blockage of filter?

Do gyro instruments suffer from icing in an air-driven gyro system? Do they have any particular way to protect them against blockages of filter or any type of other blockage? (Alternate source?)

From all that I have seen on that type of aircraft, there is merely a filter. If one was operating in a dusty environment (eg the bush) then I would add those to a 100 hour check. But honestly, I have never seen one clogged to the point it would not work.

They are not suspectable to icing as there is a low pressure drop across them, and they get their air from inside the cabin, where there is not a cold mist. It's usually rather dry and at low temperatures, it is probably heated.

The alternate air is for the static port, which is exterior, and will ice up, although it is a rather infrequent occurrence. The altimeter, airspeed and VSI are not gyro instruments, and are impacted by the static port. Keep in mind that if your altimeter is not reading correctly because of static port ice, then most likely your encoding altimeter is similarly off, and your mode C (or other) readout at ATC will be off. In my experience, the Cessna models you listed tend to ice less than the PA28 models, but again, it is rare, even for weather flyers. And if it is happening to you, you need to reexamine your weather choices.

While we are talking blockages, the pitot tube is the most frequent, and there have been times that I have had to remove a bug from the tube on the Cessnas. Let a mechanic do it the first time, so that you get some of the tricks. I usually use a straightened paper clip or a piece of safety wire, with a sharp hook, about 0.3mm bent in it. That will help you scoop out the bug. Again, this doesn't happen often, as usually we have covers on pitot tubes, but I have had it happen in remote areas (like Central American hilltop unimproved airports) so if you are flying to those places you need to make friends with your mechanic so that you can manage the lots of different things that come up.

In summary, the vacuum gyros have a filter, and they don't tend to clog often. Some of them are rather coarse, but modern ones have 10 micron filters or better. If you are in an extremely dusty area, they should be periodically inspected. For most people, they will never have a problem with them. (If you have that much dust in the cockpit, then you will have other problems, including avionics switches, dirt creeping into displays, etc.) 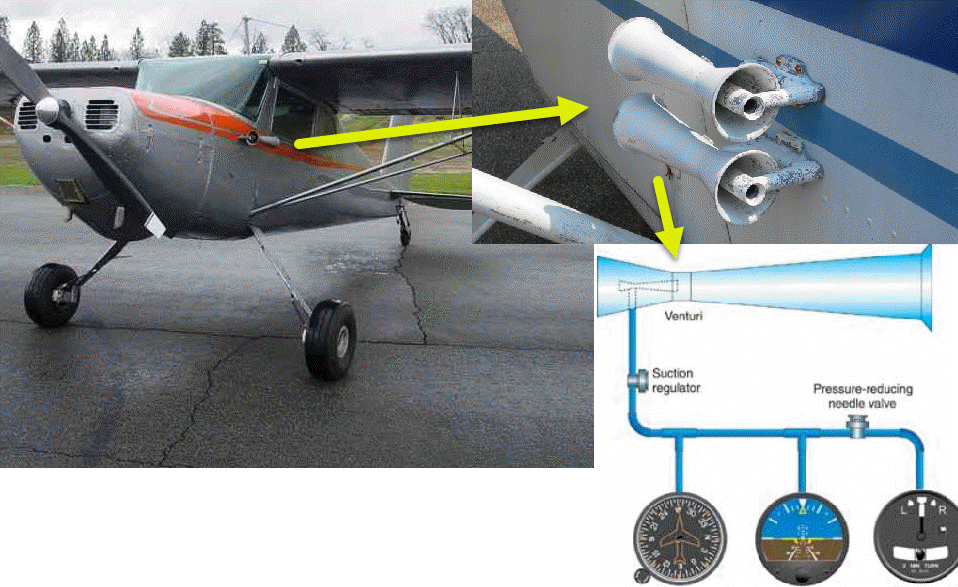 Only Venturi style pumps suffer icing. That's one of the reasons why they were quickly replaced with the dry/wet air pumps.

Flown in icing conditions, your Venturi will quickly acquire the appearance of an ice cream cone and cease functioning as a vacuum source.

Not the answer you're looking for? Browse other questions tagged aircraft-design gyroscopic-instruments or ask your own question.