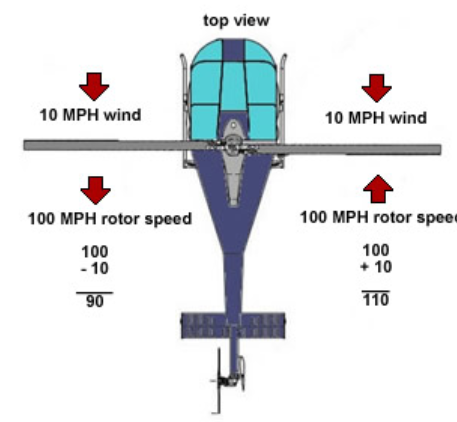 So on the left it shows wind flowing with the direction of the rotor, yet it represents that it would reduce the rotor speed. I'm wondering how it does this, wouldn't the wind minimally help increase rotor speed by pushing it? Even if the effect was minimal to the point that it was neutral, why would it slow the rotor down?

If anyone could explain that would be great! Thanks.

From your image, the advancing blades (right side) would indeed be faster (relative to the air).

The rotor RPM is fixed all around, but in forward flight—say at 10 knots forward flight like your example—the advancing rotor will have an additional free 10 knots of airspeed (check image below). The other side will be rotating away from that airstream, losing 10 knots. 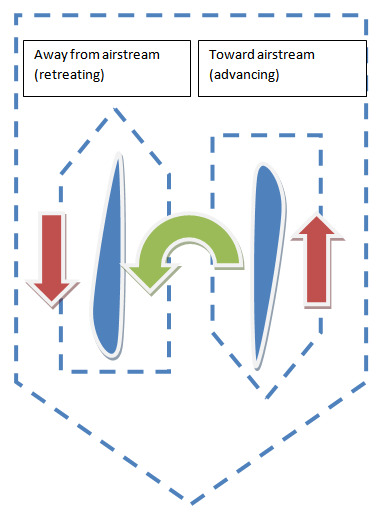 The faster side will produce more lift compared to the slower side. This is called dissymmetry of lift.

The blades are allowed to flap (change angle) independently from each other, to be able to counter this phenomenon.

If this condition were allowed to exist, a helicopter with a counterclockwise main rotor blade rotation would roll to the left because of the difference in lift. In reality, the main rotor blades flap and feather automatically to equalize lift across the rotor disk. Articulated rotor systems, usually with three or more blades, incorporate a horizontal hinge (flapping hinge) to allow the individual rotor blades to move, or flap up and down as they rotate. A semi-rigid rotor system (two blades) utilizes a teetering hinge, which allows the blades to flap as a unit. When one blade flaps up, the other blade flaps down.

3
What's the difference between feathering, and flapping in a helicopter?
5
How come there is no attempt at an “inter-meshing rotorprop” high-speed helicopter?