Most blades are squared off at the end. The Cobra fighting ship has pointed tips. Does this cancel out the "wop wop" noise? The reason I ask is that today I saw the Cobra in this news article. The tips are pointed. In 1968 I worked at Bell Aerospace making blades for use on Hueys and all had squared off tips as were tail rotors. Seeing this bird brought back memories.

Yes. Especially tip shape, which is optimized in most modern helicopters (and upgraded older ones) to reduce noise.

Basically, the blade tip shapes are optimized to reduce the noise caused due to blade-vortex interaction (BVI). From Parametric Study for the low BVI Noise BERP Blade:

The BVI (Blade Vortex Interaction) phenomenon,especially parallel interactions between the helicopter main rotor blade and the tip vortex, is the cause of significant noise and vibration problems in helicopter operation. In particular, the descent and banked turn flight conditions are known to produce significant BVI.

This phenomenon is explained in this article in rotorandwing:

... higher-pressure air will spill out from under a rotor blade at the tip, get sucked toward its upper surface, and create a strong corkscrewing swirl of air, or tip vortex. ... an approaching blade will often come into the vicinity of a tip vortex left by a preceding blade. When the high-energy swirling air strikes the rotor blade, it causes a sudden change in angle of attack and an associated change in pressure on the surface of the blade. This is what creates the loud impulsive noise that can be annoying to those on the ground.

If the blades are designed in such away that the pressure change due to the BVI is reduced, the noise can be reduced. This is the reason for the differing shapes of modern helicopter blade tips. A good example is the Eurocopter Blue Edge concept, which Airbus claims reduces noise by 3-4 dB:

Blue Edge™ main rotor blade has a double-swept shape to change the blade-vortex interaction (BVI) that occurs at the tip of any helicopter blade – significantly reducing noise levels created during a typical descent profile. 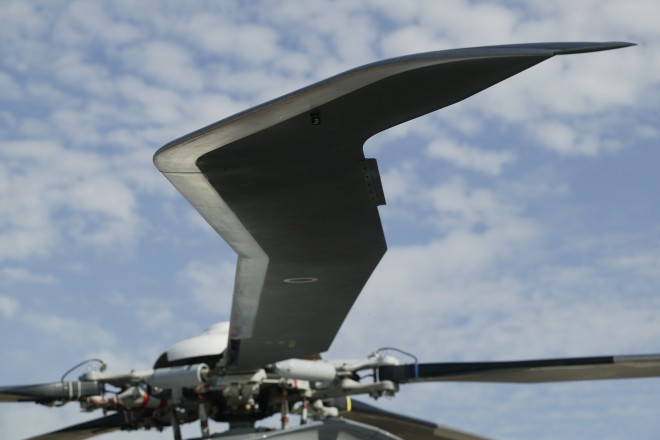 That varying the tip shape will affect the BVI and consequently noise, was well known (for example, see the NASA paper Evaluation of Helicopter Noise Due to Blade-vortex Interaction for Five Tip Configurations by Danny R. Hoad, which compares the sound produced by various tip shapes). However, with the advances in computer modeling and CFD, a number of modern helicopters incorporate blade tips that have been designed with the express purpose of reducing BVI and noise.

10
What is the bend in the tip of the blade of the new Black Hawk?
2
Why do new helicopters have rotor blades with swept tip?

21
Why does a helicopter need cyclic control rather than just tilting the whole main rotor?
28
How does a coaxial rotor helicopter achieve yaw?
1
How does wind speed affect helicopter rotor speed?
4
How does the rotor blade material affect aircraft performance?
8
What is the range of frequencies of vibration in a helicopter due to the main rotor alone?
2
Why does the Apache create much more rotor noise than the A-129?
1
Will Thrust on Rotor (Main) increase with altitude?
3
How does a bearingless rotor work on a helicopter?
0
What is rotor damping and how does it affect helicopter stability?