What protects the location beacon (pinger) of a flight data recorder?

The pictures of flight data recorders show that the location beacon (pinger) is outside the main protection encasement: 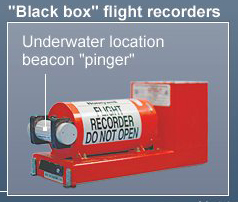 Is it really a good idea to keep such a vital instrument unprotected? Or is that round metallic thing strong enough to resist impact and fire?

Is it really a good idea to keep such a vital instrument unprotected? Or is that round metallic thing strong enough to resist impact and fire?

The casing of the ULB is itself designed to be strong enough to withstand the forces expected when an airliner crashes into an ocean, lake or large river (which are the only circumstances where a ULB is useful).

See teardown video starting at around 4:45

Copies of the relevant standards cost $70 each. However, a 1968 report from the early days of ULB development says

As voretaq7 notes in a comment: ULBs need to be external to the FDR/CVR canister because they need to have batteries changed regularly without affecting the integrity of the data recorder canister.

Not the answer you're looking for? Browse other questions tagged flight-data-recorder or ask your own question.