What are the pros and cons of single-engine vs. twin-engine?

Why would someone prefer to own a single-engine vs. a twin-engine airplane?

What are the pros and cons of each?

In the light aircraft world there are a few trade-offs to consider. The short version:

In addition to the operational considerations there are some other practical items to consider: twin-engine aircraft require a multi-engine rating (which means more training time). Twins will also generally be more expensive to purchase/rent (and may be more difficult to rent when away from home), and will likely cost more to insure (particularly for low-time pilots).

As I remember, most pilots coming out of WW2 (including my father), considered twins safer than singles, certainly for over-water operations, but with the caveat that the pilot of a twin losing an engine had best be proficient in handling that.

Engine technology changed. For example, the Cessna AT-17/T-50/UC-78 Bobcat, with two radial engines, was a 5-place twin in use through and after the war. Certainly an argument could have been made that it was safer than single-engine planes with radial engines in use just after the war. I certainly felt that way, an opinion gotten from my father. However, by the time the six-seat Cessna 210 came along with it's horizontally opposed engine and flying higher and faster than that old twin, my guess is that most pilots familiar with both aircraft would prefer the single. I certainly did, especially since I saw two engine fires that happened when starting the T-50 radial engines.

Now bring on the turbine-powered singles. My guess is that most pilots would prefer a single turbine-powered aircraft to a horizontally opposed twin. Having spent a lot of time in twin-engined, horizontally opposed, Cessna 310s (including one engine failure), personally I would opt for a single turbine, especially if it was a PT6 or Garret TPE331. 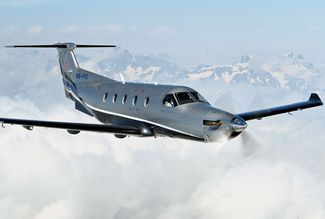 All of the size, range and payload capabilities of the PC-12 flow from the fundamental design choice of using only one engine. Carrying the fuel to feed a second engine, plus the weight and drag of the engine itself, all cut into range and payload. The second engine and its costs also mean the twin-engine turboprop that comes closest to the PC-12 in cabin size and full fuel range falls hundreds of miles short when the same payload is aboard, and costs at least a million dollars more to buy.

An aircraft with a very reliable single engine therefore seems to be the best choice under Part 23.

Not the answer you're looking for? Browse other questions tagged aircraft-design single-engine aircraft-purchase or ask your own question.

15
What fighters have both 1 & 2 engine versions?
7
Why aren't there any single turbofan airliner?
11
How does the range of a single- and twin-engine for small aircraft compare?