Questions about the Space Shuttle and Buran orbiters within the atmosphere when detached from their boosters and tanks. Questions about space are off-topic.

The Space Shuttle orbiter was designed to be an unpowered glider once completing re-entry into Earth's atmosphere (the rocket engines were used during lift-off only). 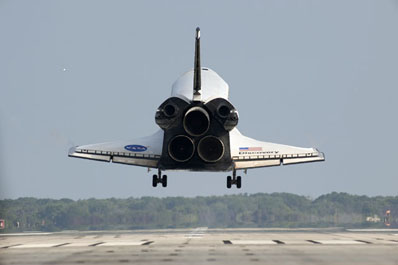 The Buran was the Soviet space program's shuttle. Originally conceived with jet engines. It flew only once without them (completing an unpowered landing like its American counterpart). The program was abandoned shortly thereafter.

Use this tag to discuss both craft in their capacity as aircraft only. Questions about launching and their functions as spacecraft can be asked on Space.SE.

How does the Space Shuttle slow down during re-entry, descent, and landing?

If Space Shuttle flies "like a brick", why does it need the wings?

Why did the space shuttle use bias-ply tyres instead of radials?

How does the Space Shuttle slow down during re-entry, descent, and landing?