Can a steady flow have stagnation points?

I am confused by this idea. If a flow is steady, its streamlines are unchanging. Taking the typical example of an airfoil, there is (at least) one streamline which will hit the leading edge of the airfoil and stagnate. Stagnation point is defined as:

a point in a flow field where the local velocity of the fluid is zero.

Further, an online Fluid Mechanics course I have been following has in one lecture shown streamlines going away from the stagnation point. If the velocity at this point is precisely zero (and is unchanging since the flow is steady), then how can the fluid particles go in other directions?

I must be missing something, do enlighten me.

In reality, air molecules have a finite size, so they flow either above or below the stagnation point streamline. Even if one particle manages to arrive at the stagnation point and stays in place (which is not possible in theory), a small angle of attack change will wash it away in the next moment.

The concept of a stagnation point is really helpful for understanding flow phenomena, however. There is really a line (in 3D it is a plane) which separates air that will flow over the wing from that which will flow below it. This line changes with angle of attack, and the simple stall warning vane is based on this principle. Once the line ends below the vane, air will press it upwards, closing an electrical contact which activates a buzzer in the cockpit. 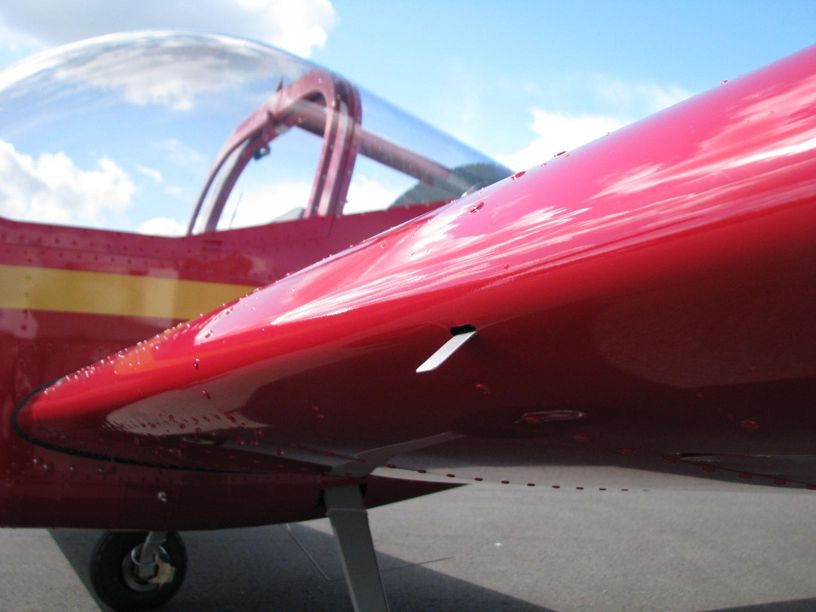 A stagnation point in a flow does not defy the conservation of mass law. Peter Kämpf already explained that it is an idealization which helps to understand flow phenomena.

The fact that the velocity is zero at a point along a stream line does not mean that mass is collected at that point. You can compare it to a stop sign on a road. Cars arrive at the sign, stop and pull up again. As long as there is sufficient space between successive cars this can be a continuous process representing a steady flow.

Taking this analogy further, the stagnation point at the leading edge of a 2D profile is like a T junction on a one way road. Cars arriving at the T junction stop and continue with either a left or right turn and follow thier paths. Air molecules arrive at the stagnation point and continue from there either along the top or the bottom of the profile.

Velocity is an instantenous phenomenon. It exists at a point.(lets ignore Average velocity here, it isn't necessary that we discuss it for this question.) At the stagnation point, the velocity is 0. However, at a distance dx from the stagnation point, the fluid particle again gains momentum. It sort of is like a pendulum. At the highest point its velocity is zero, but after a differential time dt, it again regains its velocity and starts to move. You see fluid particles like a pendulum need a stimulus to do so, in the case of pendulum its gravity, for a fluid particle, it can be anything from a pressure force to inertia

48
Why/when is the blunt nose better?
7
What is the physical explanation for the formation and position of stagnation points on an object moving in a fluid?
1
Would the Wright Flyer have flown better with thicker airfoils?
2
Blunt noses subsonic drag - why a complete ellipse?
0
Is pressure lower than ambient on the pressure (bottom) side of an airfoil?
0
What happens when the velocity of the lower surface of the airfoil is lower than the velocity of the free stream?

4
Is the Reynold's number a function of the fluid flow stream or the obstruction?
2
Are these pressure and velocity distributions calculated by CFD simulation correct?
7
What is the physical explanation for the formation and position of stagnation points on an object moving in a fluid?
1
Is there a real temperature change along a streamline when its velocity changes?
10
What is the physical meaning of circulation found in Kutta condition?
2
How can the zero-lift drag coefficient (parasitic drag) be calculated?
0
Pitching moment as a pure moment and its measurement with a homemade force balance
0
Can the wing stagnation point be bled off and used for laminar flow control?
1
What about an airfoil's shape makes air flow faster around it?