Why is a special certification needed to land at Paro Airport?

Why is Paro Airport (currently the only international airport of Bhutan) considered one of the most dangerous airports to land in the world?

Is it because of the mountains? In my opinion, Princess Juliana International Airport is also as challenging as Paro.

The approach to Paro is unbelievably complicated. It is flown visually through a valley with high mountains all around and no sight of the airport until the last moment. Here is a cut of a map with the approach paths: 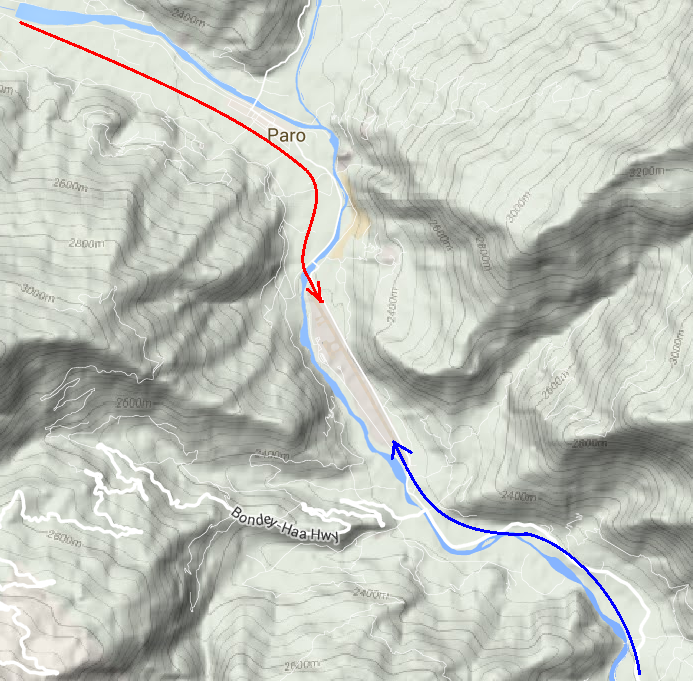 Approach to runway 15, marked in red, is worse in this regard. The ridge is rather close to the airport, so the final turn usually ends over the runway threshold. The wings get level with 30–50 ft (10–15 m) remaining only (here's a video). The approach to runway 33, marked in blue, allows a bit more of a straight final, but not by much. In either case the aircraft must emerge from the turn with correct altitude, speed and rate of descent. So the pilot has to know landmarks in the valley and how to judge correct approach profile by them. The approaches also often involve turning around higher in the valleys which again must be done by landmarks at places where it is known to be possible. It is this knowledge pilots have to demonstrate before they can attempt the approach (as pilots in command).

There are other airports where pilots have to receive special training to be permitted to fly there, for example the Samedan Airport near St. Moritz in Switzerland, which is similar mix of high altitude, high mountains around and visual approach, though it's still a lot easier as the airport is visible from much greater distance.

There is however nothing similarly difficult on Princess Juliana Airport. It appears approaches to Princess Juliana are only flown to runway 10 and these are over flat sea and flat beach. The runway is visible from great distance and the approach is straight. The featureless water makes it slightly harder to judge height than solid ground, but that's what the approach lights (VASI/PAPI) and distance-altitude table are for (there is no ILS at TNCM, only VOR-DME). And there are many airports with approach over water, so it's nothing unusual for the pilots. If there was approach to runway 28, it would have to be off-axis to avoid the hills on the island, but it does not appear to be used at all.

According to that the training involved:

He also wrote that while on early flights when temperatures are still low the performance is good, later in the day it becomes marginal and they often needed to follow the valley quite far before they managed to climb above the mountains. Careful planning and weight and balance calculation was always necessary.

I'll answer both, which I think answers your overall question about "Why does Paro need special certification but Princess Juliana doesn't?"

Why does Paro need special certification?

You've mostly answered this, it's because it's high up and in challenging terrain.

There's real no question that Paro is a difficult airport to land at: it requires an unusual approach, special awareness, a higher than normal level of skill and is very unforgiving.

Because although the videos look very dramatic, simply put, it's not very hard to land at. The runway is short compared to most international airports, but it is long enough. Once the runway is beyond the minimum required for an aircraft, it's long enough and that's all there is to it. A longer runway may in theory require fewer go-arounds, but a "long enough" runway doesn't make landing there hard

Other than the runway length which, as just described, isn't actually a problem, there's nothing too difficult about it:

It's not the easiest airport ever to land at, but it's not unusually difficult... although it certainly looks very dramatic, with the videos of Airliners sweeping over the top of a beach and road. The important thing to note is that the beach and road are both well below the glideslope - aircraft only really care about obstructions near or above the regular glideslope.

Although that beach approach looks crazy it actually poses no problems whatsoever for an aircraft - the jets are still comfortably on the glideslope: they don't care if the last section before the runway is grass, sand, a road etc, they were always going to be at that altitude.

You since edited the question to ask how they get this certification - you'd have to go and work for Druk Air (Royal Bhutan Airlines). Until recently they were the only carrier who flew into or out of the airport, and they work with the Bhutan government to certify pilots.

Not the answer you're looking for? Browse other questions tagged landing flight-training airport or ask your own question.

2
Flying to Paro, Bhutan requires a special crew, what are the regulations?

20
What are the most efficient layouts of multiple runways?
9
Was this Gulfstream way below the glideslope?
9
What is needed to certify an aerodrome as an airport in Canada?
9
Why would aircraft take-off in the opposite direction as landing despite wind direction?
16
Why did flight attendants need to be seated early landing at Palm Springs?
0
Why are landing-distance and rejected-takeoff certification tests performed without thrust reversers?
4
Are there generic routes all pilots can fly?
0
What is required by and for flights that cross borders in terms of border control?
1
Why do most U.S. cities with multiple airports try to concentrate airline operations at just one airport instead of spreading out the load?