Why does the 757 fuselage bend more on turbulence than those of other airplanes?

According to this discussion(2nd)(3rd) and this video there is more fuselage bending in turbulence on the Boeing 757 than on other Jets. 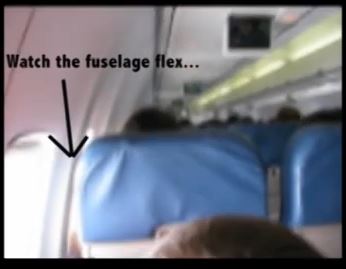 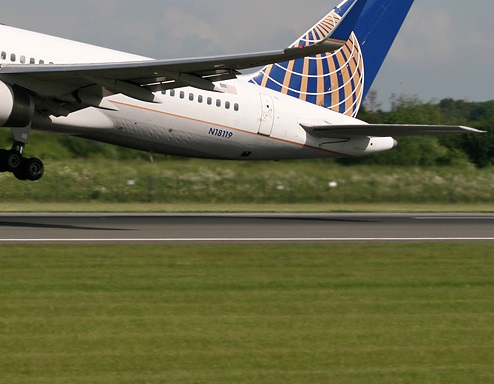 I'll give the simple answers here. You can go into a LOT of detail, but the detailed answers are mainly just bringing more information on design/engineering differences into the simple answers (eg composites bend/break in a different way to aluminium)

Why does a fuselage bend?

The lift is generated, primarily, in two places: the wings and the horizontal stabiliser (some is generated in the body too, but relatively little). Most of that lift is generated at the wings, which are attached in the middle(-ish) of the fuselage. Imagine balancing a ruler (fuselage) on your finger (wings), then stacking coins along the top of the ruler. The heavier the rule, and the more "lift" your finger has to provide, the more the ruler flexes.

Of course, lift isn't constant - turbulence means that over a few second the lift provided by the wings can change quite a lot. Imagine you start bouncing your finger up and down, creating "turbulence": the ruler will flex and unflex as it absorbs that changing force. This is the fuselage flex seen in aircraft.

Why does the 757 flex more than other airliners?

Well, for one thing I don't see any sources for this other than "I've heard that" (the links you provided are mostly hear-say too), but I have seen it stated as fact. Let's, for the moment, assume it's fact... the theory applies regardless.

The 757 will flex more than some other airliners (although likely less than some others) because of its design, construction and the build materials. The simplest explanation is that it's one of the longest narrow-body airliners.

What does that mean? Well, it means it's one of the longest, thinnest fuselages around. This gives us two causes:

TL;DR: Flex is caused by lift acting mostly in the middle(ish) of the fuselage, while the weight of the fuselage and other forces on it are spread out along the length.

Overall, then, the 757 is on the boundary between lighter, narrow bodied aircraft and larger, wide bodied ones. Anything smaller than it weighs less so stresses the narrow body less. Anything larger has a bigger, stronger fuselage.

First, there is no fuselage bending to be seen in the linked movie. What might look like flexing is actually the seats and the interior panels moving due to inertial forces. In turbulent weather the aircraft will be shaken by gusts, and this causes the movement between seats and panels.

Second, in the picture the flaps are in take-off, shifting the center of lift aft, and the tail pushes the nose up, so it needs to create a considerable downforce. This is transferred via the rear fuselage to trim the moments of wing lift and weight, which attacks at the center of gravity. See the sketch below; blue are aerodynamic forces and red the stresses in the fuselage.

Your enlarged picture shows buckling of the lower rear fuselage panels. This is normal behavior under stress and enables them to take higher loads. When a plate is stressed, it first deforms in-plane, but when compression loads exceed a critical value, the plate responds by buckling out-of-plane. The sketch below shows the general relation between stress and strain. 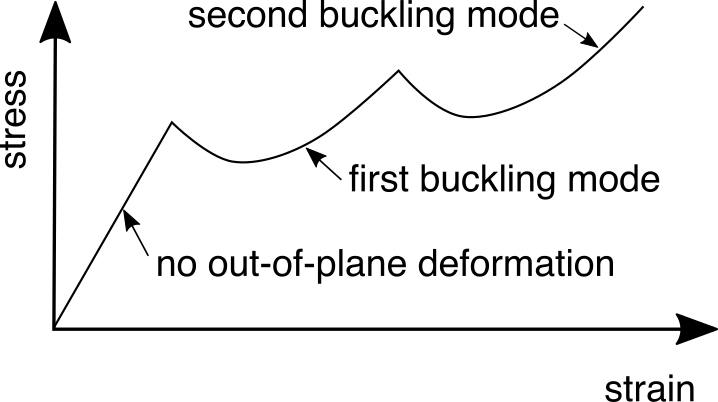 For the 757 flexing more than other airplanes: Maybe this has to do with the slender forward fuselage. This leads to more flexing at the same strain in the aluminum panels. The rear fuselage is higher to accommodate more baggage. During development Boeing engineers were afraid that directional stability might be insufficient with a higher forward fuselage, so the cross section was restricted to that of a Boeing 737. But there are aircraft with even more slender fuselages like the MD-90 (see below). They should flex at least as much as the 757. 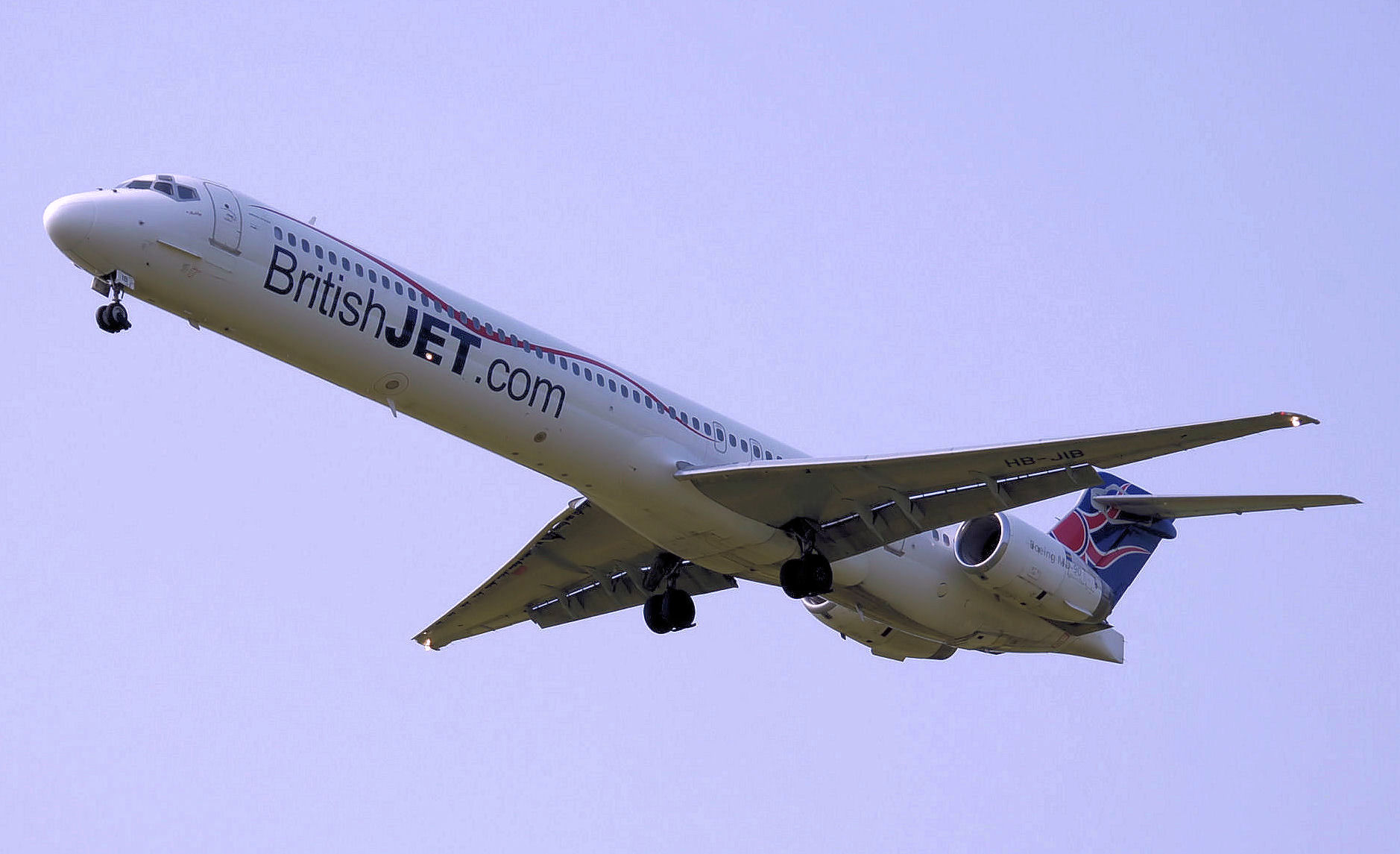 Any aircraft part will flex when subjected to stresses, and the fuselage is no exception. Especially the forward part will create lift and side force during flight, its own mass will cause it to bend down the more you move away from the wings, especially when subjected to g-forces, and tail-mounted control surface deflections will add more stress and bending, like in your picture. Fuselage flexing is actually severe enough that in flight test the fuselage will carry inertial sensors at several locations to collect enough data.

39
Why don't airlines load their passengers like freight?
13
Are modern airliners still stressed-skin aircraft?
4
Can small RC aircraft utilize a steel sheet monocoque construction?
6
What causes this surface texture, and how does it affect flight characteristics?
3
What is the structural significance of 'dimples' on the fuselage of a Boeing 747?
1
Can buckling of wing skin panels occur without external compressive loads?

13
Why didn't the Boeing 757 share the 767 fuselage?
5
How many hydraulic systems does the Boeing 757 series have?
3
Which avionics suite does the 757 use?
56
Why does the F-117 Nighthawk look different than other stealth planes?
6
Why is the Boeing 757 undercarriage so high?
50
Why does this 757 have a propeller engine attached to the fuselage?
3
Why didn’t the 757 have manual-reversion capability?
10
How is a Flying-V more efficient than current fuselage-over-wing designs?
17
Why aren't 757 scimitar winglets flush with the ailerons?