Could I build an airship (rigid dirigible) that used a vacuum rather than lifting gas?

There are other questions (c.f. What gas is used in airships to give them buoyancy?) that discuss the use of lifting gasses such as Helium and Hydrogen in airships. Helium is rare and Hydrogen is flammable.

If one could build a light-enough and strong-enough rigid outer frame, then couldn't one use a vacuum rather than lifting gasses? At ground level, the frame would only have to withstand 15psi (100,000 pascals), which isn't a tremendous amount of force. Theoretically, a vacuum should provide even greater lifting force than any gas.

Have there been any attempts at vacuum based rigid-dirigibles -- and if not, what are the technical or mechanical limitations to doing so?

what are the technical or mechanical limitations to doing so?

There is no known material that has a sufficient combination of lightness and strength to support a vacuum that would support the weight of the container on Earth at sea-level.

There was a similar question with a good answer on Physics.se

Is it possible to make a solid rigid evacuated "balloon" out of Beryllium or other elements or alloys?

The currently first answer runs through the maths

calculated it over a database of almost 3700 materials including all common aerospace composites, metals and alloys.

So in short, the best materials fall short of achieving our aim by a factor of just over 2. It is conceivable we might push up the stiffness / density ratio by perhaps developing some kind of Beryllium foam. For example, a closed cell foam of this Beryllium with a relative density of 0,041 would give a value of about 920 at the expense of lowering the Young's modulus to about 600MPa - however, I have no idea if such a foam is even possible. Alternatively it might be possible to come up with some clever engineering of the envelope geometry to overcome the buckling constraint. However, I suspect the effort is unlikely to pay off with a better boyancy ratio than is already achievable by conventional balloons.

The other answers correctly point out the extreme (impossible) materials strength and stiffness requirements of a vacuum balloon. Another notable point is that the advantage in lifting capacity is small; at standard temperature and pressure the buoyancies of helium, hydrogen and vacuum are respectively 1.096, 1.185 and 1.275 kg/m^3. So even if you could hypothetically build a vacuum balloon with the same envelope mass as a hydrogen or helium balloon, it wouldn't be able to lift much more payload.

Beneath the argument that it's impossible to build a structure which can withstand the outer pressure, pericynthion pointed to another argument: The buoyancies of gas and vaccuum is similar and the higher mass of a vacuum-airship will cancel the benefit.

But there is even more:

Airships usually include a balloon filled with air. If the ship ascends, the gas expands and the air is pressed out. (see http://www.americanblimp.com/fly.htm) This way, the inner and outer pressure is equal and there is no additional stress on the hull due to overpressure.

Also, the buoyancy does not decrease: In an altitude of about 5.8km, air pressure is reduced to 50%, and so is the buoyancy for a fixed volume. If you let the gas expand, it will expand to twice its volume. Twice the volume times 50% buoyancy gives you 100% buoyancy again.

But a fixed volume of vacuum will not expand and have only 50% of its buoyancy at sea level.

Of course, 5.8km altitude is very much for an airship, but the numbers are nice to show the effect. And due to the exponential nature of the air pressure, a gas-filled airship which allows the gas to expand has a higher buoyancy than a vacuum airship with fixed volume above 600m for hydrogen filled and 1200m for helium filled ships. Here is a plot comparing the buoyancy of 1m³ of vacuum to 1m³ gas at sealevel: 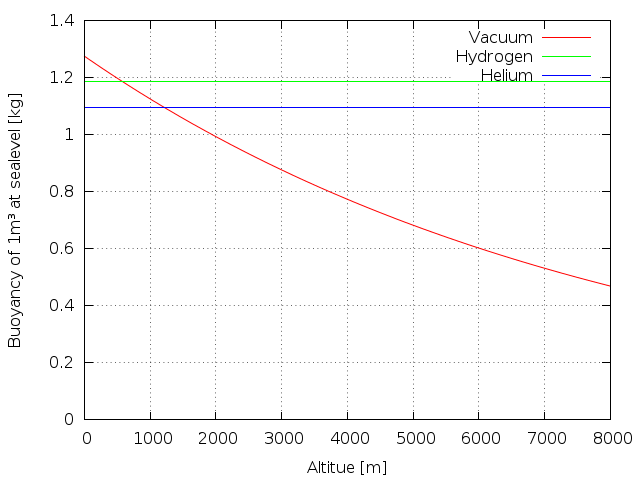 (By the way: This is the reason why weather balloons have a flexible hull or seem to be partially filled only at sea level)

All of the links I've seen are to sites where it is implicitly or explicitly assumed that the dirigible is a homogeneous sphere. This approach does have some merits - any failure has to originate at some point, and if the sphere is absolutely uniform then there is no obvious point of first failure; and in the analogous situation of deep sea exploration spherical construction has been shown to have its uses. However, in practice no material construction is ever completely uniform, and even if one was, until the dirigible was aloft there would be a difference between those points which were in contact with the ground or supporting structures, and those which were not.

It seems to me that a much better approach would be to have something which is approximately spherical, but which is supported internally by a complex system of ribs and buttresses, akin to what can be found in a gothic cathedral.

For a starting point, take a look at e.g. http://www.cutoutfoldup.com/905-spherical-model---cube.php. Imagine this structure scaled up and manufactured to extremely high precision using the strongest available materials, and covered by a thin film so that the interior is completely enclosed. What you'd have is essentially a sphere which is very thick at certain points (i.e where the ribs are) but very thin at others. The ribs would be able to withstand enormous pressures. The other points - not so much. As it stands, it would fail at one of the non-ribbed points. So, not a great advance. But now imagine that the material of the faces is quite strongly curved; that each face is a portion of a sphere which is much smaller and therefore more strongly curved than the overall sphere. These smaller spherical segments should be able to withstand a much larger external pressure than a large sphere of the same thickness.

Now imagine each of these bubbles is itself ribbed, with the facets between the ribs occupied by still smaller ribs and bubbles. The construction is effectively fractal, with the repetition at smaller scales occurring as often as is required. The very smallest bubbles would be very highly curved, and therefore very strong. The external pressure exerted on them would be directed to small ribs, which would in turn be directed to larger ribs, and so on. I don't know of any attempts that have been made to construct a vacuum dirigible along those lines, but I don't see why it shouldn't work.

EDIT: If we understand that any vacuum achievable on Earth using a mechanical pump is in fact just a partial vacuum, and we therefore use the word "vacuum" as an abbreviation for "partial vacuum", it follows that "vacuum dirigible" and "lifting gas dirigible" are not mutually exclusive terms. It should be possible to construct a dirigible containing hydrogen or helium at significantly reduced pressure, instead of the slight overpressure that is normal. The rigidity would then have to come from the structural rigidity of the shell instead of from the internal pressure.

The big advantage, in the case of a reduced pressure helium dirigible, is that under normal circumstances the loss of helium to the atmosphere should be negligible, unlike a normal balloon where losses are substantial and have to be continuously replenished. The major gas seepages would be from the higher pressure exterior to the lower pressure interior, and any potentially escaping helium would be in effect swimming against that current. It would also be seeping through a rigid material which is likely to be more impervious to the flow than a more flexible material would be. This advantage will become increasingly significant as the price of increasingly rare helium continues to skyrocket.

Not that it should be necessary to employ reduced-pressure helium, it's just that doing so would make construction easier by decreasing the pressure difference between interior and exterior to something more easily manageable. But I'm fairly sure that with an intelligently designed shell it would be possible to create a working dirigible even with the interior close to being a hard vacuum. The article cited by RedGrittyBrick in his answer states "the best materials fall short of achieving our aim by a factor of just over 2", and I am sure that a better structural design would result in MUCH more than double the rigidity of a simple homogeneous sphere for the same mass of material. Supercat's anecdote, below, helps to illustrate that.

According to our finite element analysis (US patent application 11/517915 (Akhmeteli, Gavrilin, Layered Shell Vacuum Balloons, you can find it at USPTO site or at http://akhmeteli.org/wp-content/uploads/2011/08/vacuum_balloons_cip.pdf ), it is possible to construct a vacuum balloon using commercially available materials and sandwich structures. In his comment, @Hugh refers to a Wikipedia article that emphasizes our calculation proving that one cannot make a vacuum balloon as a homogeneous spherical shell made of currently available materials, but does not clearly quote our conclusion on a possibility of inhomogeneous (sandwich structure) spherical shell vacuum balloon.

Not the answer you're looking for? Browse other questions tagged aircraft-design lighter-than-air airship or ask your own question.

0
Could a airship be built using vacuum as the lighter-than-air “material”?
20
Why are airships not more popular?
6
If unable to procure Helium, are there any regulations against filling lighter than air craft with Hydrogen instead?
1
What gas is used in airships to give them buoyancy?

21
What are pro/cons of steam as lifting gas for airships?